Posted on February 23, 2021 by Campbell(@CampbellSGill) in Reviews, Switch eShop 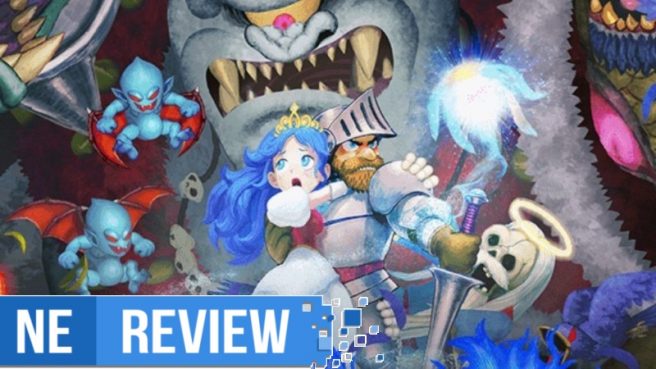 Ghosts ‘n Goblins Resurrection makes one thing immediately clear: it hates you. As the current-generation revival of Capcom’s infamously brutal series of action platformers, Resurrection is just as punishing as the games before it. It delights in throwing obscene amounts of hellish enemies at you from every angle, requiring deft platforming and lightning-fast reflexes – not to mention unshakeable endurance – to make it to the end of every level. The game does make a handful of modern additions, including the advent of much-needed difficulty options, but Resurrection remains a hardcore Ghosts ‘n Goblins game to the core. It’s sure to satisfy longtime series fans, but anyone hoping for a more modern design sensibility might need to take their boxers elsewhere.

Ghosts ‘n Goblins Resurrection reboots the series by taking legacy elements of the franchise and assembling them into an original, modern release. Think of it more like a repackaging than a full-scale remake or reimagining. While it includes a handful of innovations and additions, it primarily stays faithful toward what came before it. It keeps the same general story as before, following the fearless glass-armored knight Sir Arthur as he faces the forces of Hell to save a damsel in distress. Its gameplay mechanics, controls, and structure also remain the same – you’ll still have to play through the game twice to reach the true ending. However, perhaps no callback to the series’ legacy is as significant as its legendarily fiendish difficulty.

Resurrection is every bit as brutal as the NES and SNES games before it. Its old-school 2D levels are strictly linear and packed with a huge variety of devilish enemies, devious platforming sections, and intense environmental hazards. While some might expect a modern revival of a retro property to tone down the retro challenge, Resurrection embraces its hardcore heritage. It’s an exercise in masochism, as you’ll have enemies and obstacles lunging at you from every conceivable angle on a near-constant basis. With Arthur only able to sustain a few hits before collapsing in a pile of bones, Ghosts ‘n Goblins Resurrection requires razor-sharp reflexes and athletic maneuvers to dodge attacks and fell the endless barrage of enemies. It can be brutally punishing – don’t be surprised if you die dozens of times in a single level. Although lives are unlimited and checkpoints are spaced relatively close together throughout the levels, reaching them can still feel insurmountable in the face of so many obstacles. 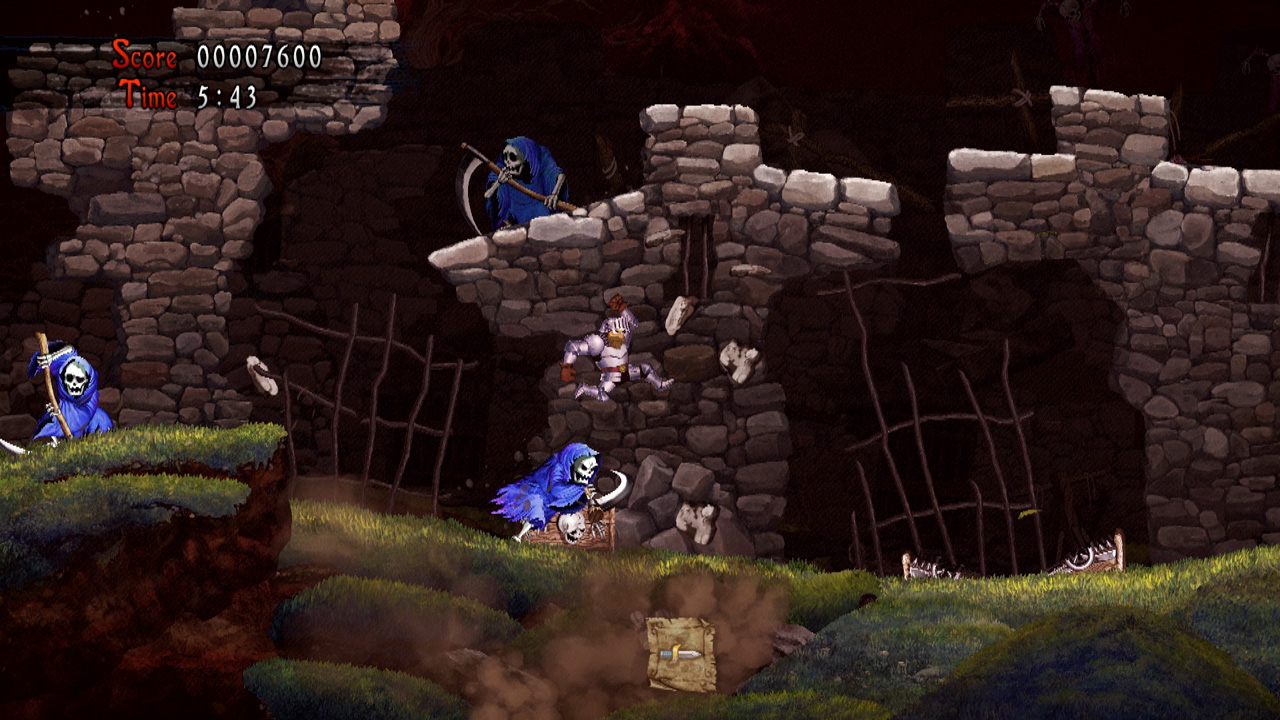 Arthur’s sluggish controls don’t help matters, either. Just like in the original games, Arthur moves like a tank despite his comically-flailing limbs. His movement is strictly limited – you can’t change direction while jumping and can’t run while attacking, either. Arthur can initially be frustrating for the modern player to control. It’s not unusual for it to feel like Arthur moves too slow to outrun enemies or safely maneuver the game’s many obstacles. However, after the initial shock, there is still satisfaction to be found in Arthur’s solid and steady movement. Once you get the hang of it, controlling Arthur provides the reliable foundation that players need to survive the game’s demanding challenges.

While there are plenty of unique enemies constantly trying to end your life, the stages themselves are sometimes your worst enemies. Resurrection features seven unique zones, each of them feeling wildly different from one another. Every level includes a host of uniquely deadly gimmicks – one might take place in the shadows and task you with strategically lighting and blowing out candles, while another may have you climbing rotating platforms to reach the top of a tower. These levels are just as varied as they are demanding: just when you’ve gotten used to one environmental hazard, another obstacle is immediately introduced. Yes, these level gimmicks are all crushingly difficult, but their impressive variety manages to keep them fun despite the brutality. 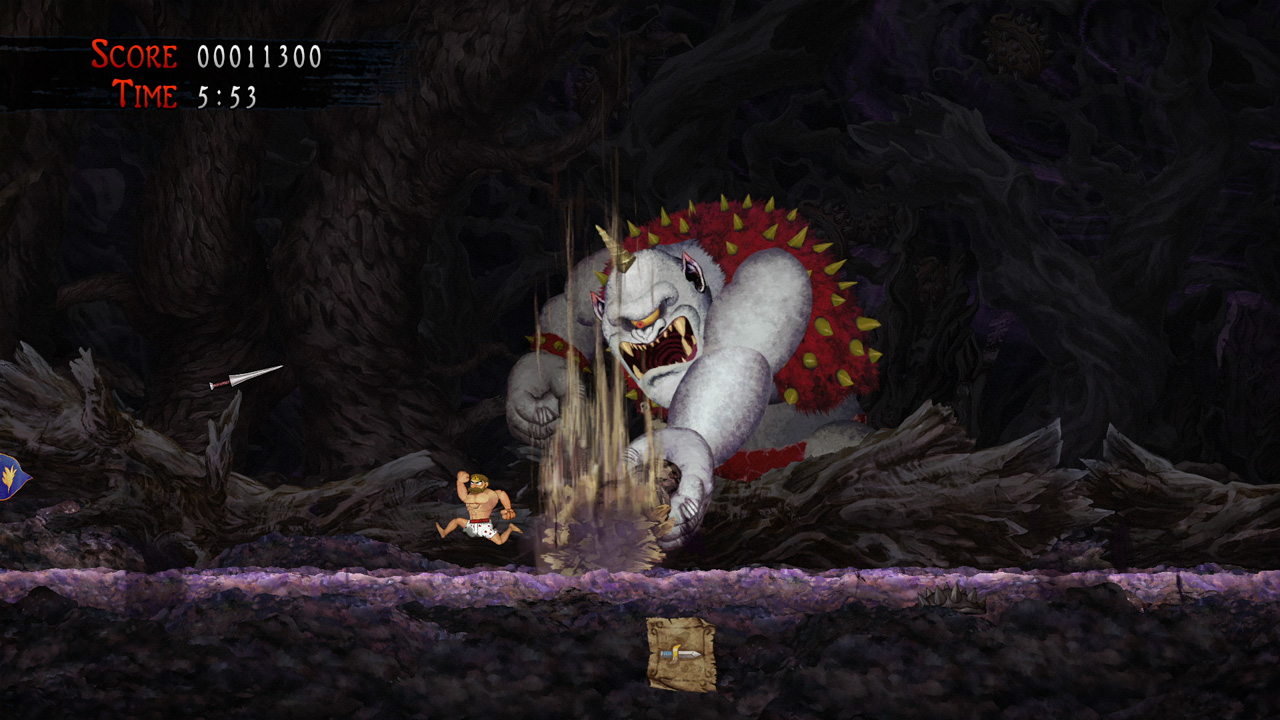 All these old-school sensibilities might sound hard to swallow for a modern audience – and at first, they are. It bears repeating once again: Ghosts ‘n Goblins Resurrection is a hard game with a single-minded focus on making you suffer. Its never-ending parade of cruelty can feel overwhelming for most players. Surprisingly enough, though, its difficulty rarely feels unfair. It thrives in trial-and-error, and without a lives system, there’s no reason not to throw yourself against every obstacle and gradually improve with each attempt. Its onslaughts may be intense, but more often than not, there is a method to its madness. Resurrection’s levels are like platforming puzzles requiring strategy, reasoning, and sheer technical skill. There’s an undeniable satisfaction in soldiering through the game’s toughest tasks after dozens of failed attempts. It might take hours of pain and futile efforts to get there, but for dedicated players, the resulting triumphant euphoria will be more than worth all the effort. It might be tricky for less-than-committed players to enjoy, but for longtime fans, Resurrection boasts everything that makes the classic Ghosts ‘n Goblins series special.

Still, it’s worth pointing out that Resurrection’s level design isn’t always blameless. While it generally stays fair, there are more than a few occasions where the game descends into cheap deaths and random obstacles. While many roadblocks can be overcome with quick thinking and skill, there are many others that are impossible to predict and come out of nowhere with no time to respond. Sawblades might fall from the sky without warning, or unforeseen enemies may spring up out of the ground. Such random, impossible-to-predict obstacles arise just a little too often for comfort, but thankfully, they’re balanced out by a larger amount of harsh yet fair challenges.

As much as Resurrection remains faithful to its heritage, it also introduces a number of modern innovations. The most notable addition is the inclusion of four separate difficulty modes: Page, Squire, Knight, and Legend, with Legend mode being the toughest and most loyal to the original games while Page mode removes most of the challenge entirely. While purists may argue that the harder modes are the only legitimate ways to experience the game, Page and Squire modes offer more than enough difficulty in their own right and serve to make the game more accessible to the less masochistic among us. These easier modes increase the number of hits that Arthur can take before his armor shatters and lower the number of enemies onscreen. That might sound easy, but in practice, even Squire mode is harder than most other action platformers. Resurrection tries to offer something for everyone with these four modes, while still demanding high skill. 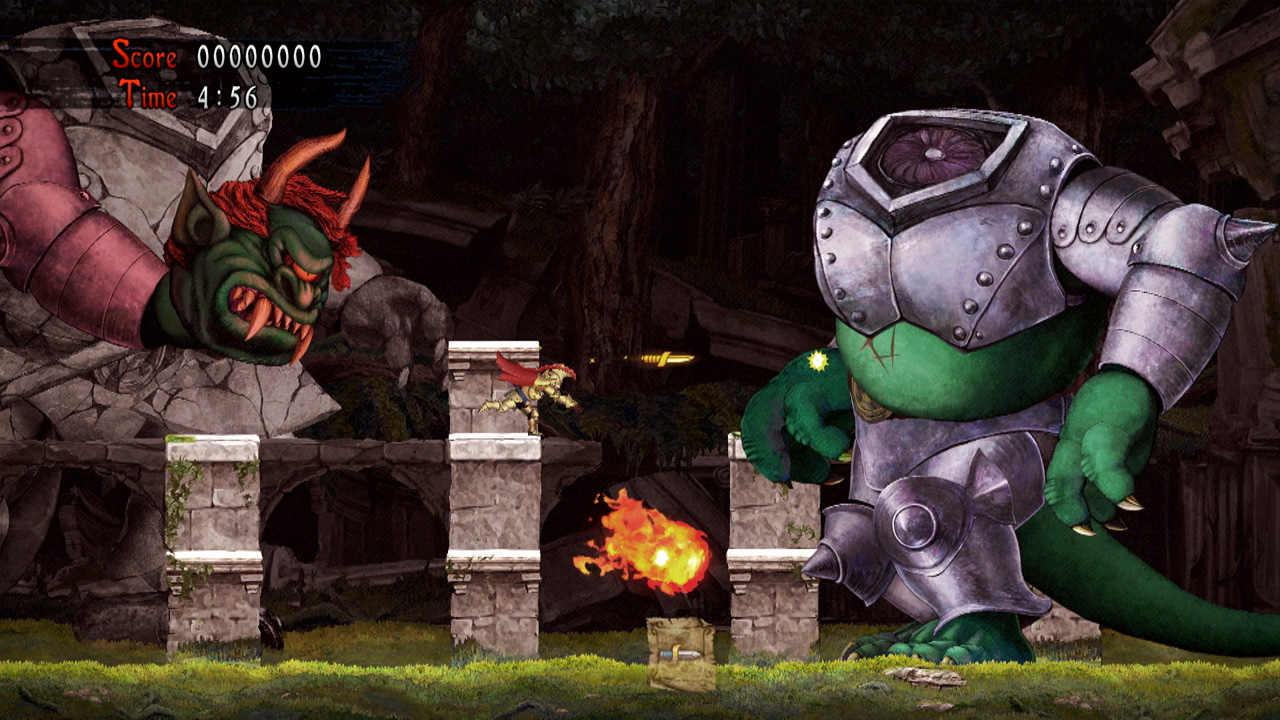 Other modernizations include an all-new co-op mode, in which a second player takes control of a free-roaming ghost-like entity that can hover freely around the stage and defeat enemies, making for a significantly easier experience. Additionally, the game also introduces a handful of new items and even special power-up abilities, which serve to dramatically change the way the game is played. These abilities, which can be earned through a skill tree, run the gamut from creating a clone of your character to transforming into an impervious rock to turning all enemies onscreen into frogs. While these updated abilities don’t detract from the overall brutality of each level, they still provide a welcome change of pace and can revolutionize the way you play if you learn to use them effectively.

One of Ghosts ‘n Goblins Resurrection’s more dramatic changes comes not in the game’s mechanics, but in its visuals. It adopts an all-new graphical style that feels reminiscent of Germanic storybooks plus a hint of medieval manuscript illuminations. Character animations seem intentionally stilted as if they are being pulled by marionette strings. As off-putting as this visual style might have been back when the game was revealed, it certainly works in motion. This presentation makes its colorful yet gothic character designs shine, and its fluid motion works well with the game’s high-octane action. Its soundtrack might not be the most memorable in the series, but it still supports the overall ambiance.

Ghosts ‘n Goblins Resurrection is an inherently niche game, one that has an equal chance of delighting and destroying its players. Anyone who enjoys brutal action games will find plenty to love in Capcom’s revival, as the satisfaction of overcoming its nihilistic challenges remains just as gratifying as ever. However, audiences looking for a more modern, less punishing experience will be left with their trousers down. Its addition of new difficulty modes and powerful abilities certainly helps make the game more accessible, but overall, Resurrection remains a prohibitively tough title for all but the most committed players. If you’re looking for some tightly-designed agony in the form of a platformer, though, you’re in for a ghoulish treat with Ghosts ‘n Goblins Resurrection.