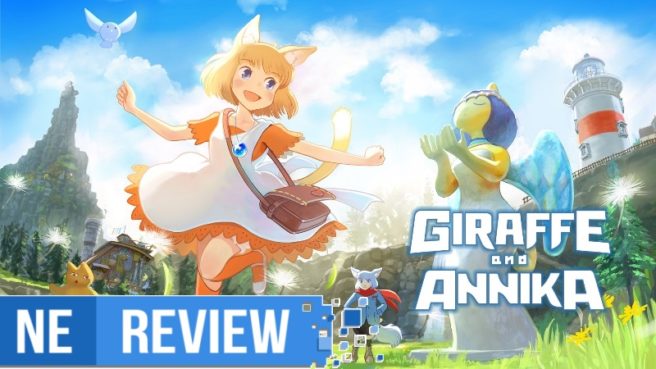 With how things are in 2020, video games have become more popular than ever, and even more so the ones that can help us escape and relax, be free from trouble, and still illicit exploration filled with joy and wonder. These kinds of titles have become somewhat of a safe haven for me. Games like Animal Crossing can personally help cope with all that’s been happening as of late, and now Giraffe and Annika adds itself to the list of releases made for escapism in the purest sense.

Giraffe and Annika puts you in the shoes and fantasy world of Annika, a cat girl in the island of Spica who travels alongside her companion Giraffe (who’s in fact not a giraffe) in search of star fragments across various dungeons and retaining her lost memory along the way. In true thematic dungeon fashion, each dungeon will test new abilities and bring with it a certain aesthetic to keep it distinct from one another while moving the narrative forward. Over the course of your 4-5 hour run through Giraffe and Annika, little by little the island will unlock more as your memories return in tandem, constantly expanding into more lavish environments that continue to give off that sense of fantastical journeys, meeting others along the way and helping others as they aid you in return.

Most areas will be blocked off by color-coded doors, in which you’ll need the corresponding keys to proceed. These keys can be acquire in a variety of ways. Sometimes tasks have specific requirements that need to be met during a certain time of the day, so while its day/night system and clock may not seem like its much importance, you will come across the occasional “quest” that will have to be completed during a certain part of the day due to time constraints or simply for narrative purposes. 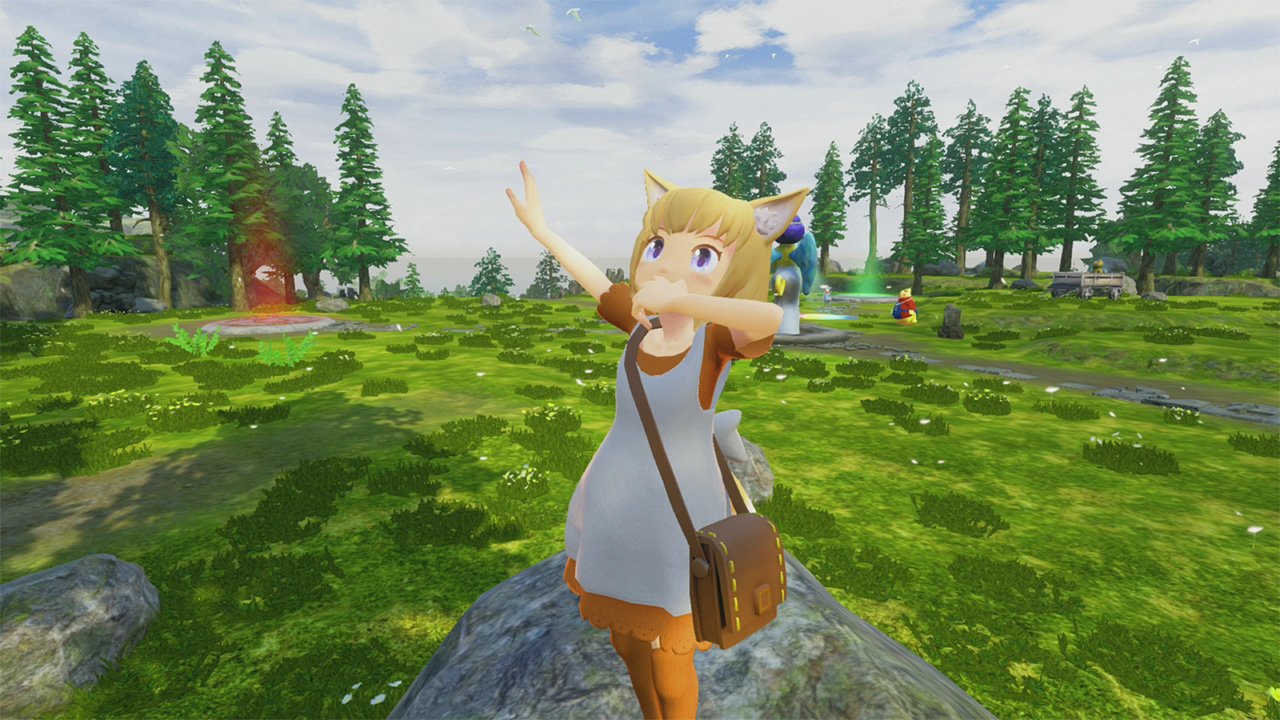 I put “quests” in quotations simply because while Giraffe and Annika may give off that sense of exploration through dungeons and traversing Spica, there aren’t necessarily experience points, weapons, or any sort of adventurous heroic tone you would normally find alongside a game that gives out quests. Nothing in the game is certainly labeled as such either, and any other NPC you happen to see walking or standing around doesn’t have any indication of sort whether they’re important or not. It’s all left to the player’s curiosity, though truthfully you’ll feel compelled to speak to whoever you see because there aren’t many people to begin with. While the world may feel empty at a glance, there’s a calming nature behind it all that never feels overwhelming because of it. At the same time, it’s not desolated enough to feel like it’s abandoned or like a prototype playground of sorts.

Giraffe and Annika does well to keep the experience smooth throughout with a lingering feeling of freedom and peace, but its biggest frustrations come from the lack of polish in its extremely floaty controls, odd hit boxes and collision detection, and occasional wonky animations and interactions. Physics from jumping, swimming, falling, and even walking feel odd and can feel equal parts heavy and then light. Movement can be constantly jarring and makes timing jumps that should be rather simple a chore as you fall into the water below, where in the start of the game you can’t be in for long due to your inability to hold your breath for long. Occasional enemies – usually ghostly figures – will all attack you with the same sound clip abused over and over, and those with projectiles more often than not will lock on to you and hit their mark 3/4ths of the time if you’re not behind an object. You move constantly at the same speed, so in wide open areas if they’re following you, it’s basically a done deal that you’ll end up losing all of your health. Thankfully, Giraffe and Annika never really punishes you in this regard, and there’s very little consequence to reaching zero as it’ll just spawn you back to a close-by checkpoint location.

It can just get really annoying when you’re constantly slipping into the water below with nothing to really stand on, getting sent back when you were simply trying to explore a certain area. Assets and textures sometimes look stretched and you can frequently find yourself floating above nothing when the floor extends longer than what it visually represents, and sometimes when you tilt your camera to get a better view of where to go next, you’ll notice some that turn into a 2D plane. While most won’t focus on things like these if you keep the camera centered and don’t pay much attention to environmental detail or design, it can still make a game feel and look sloppy despite its strengths elsewhere. 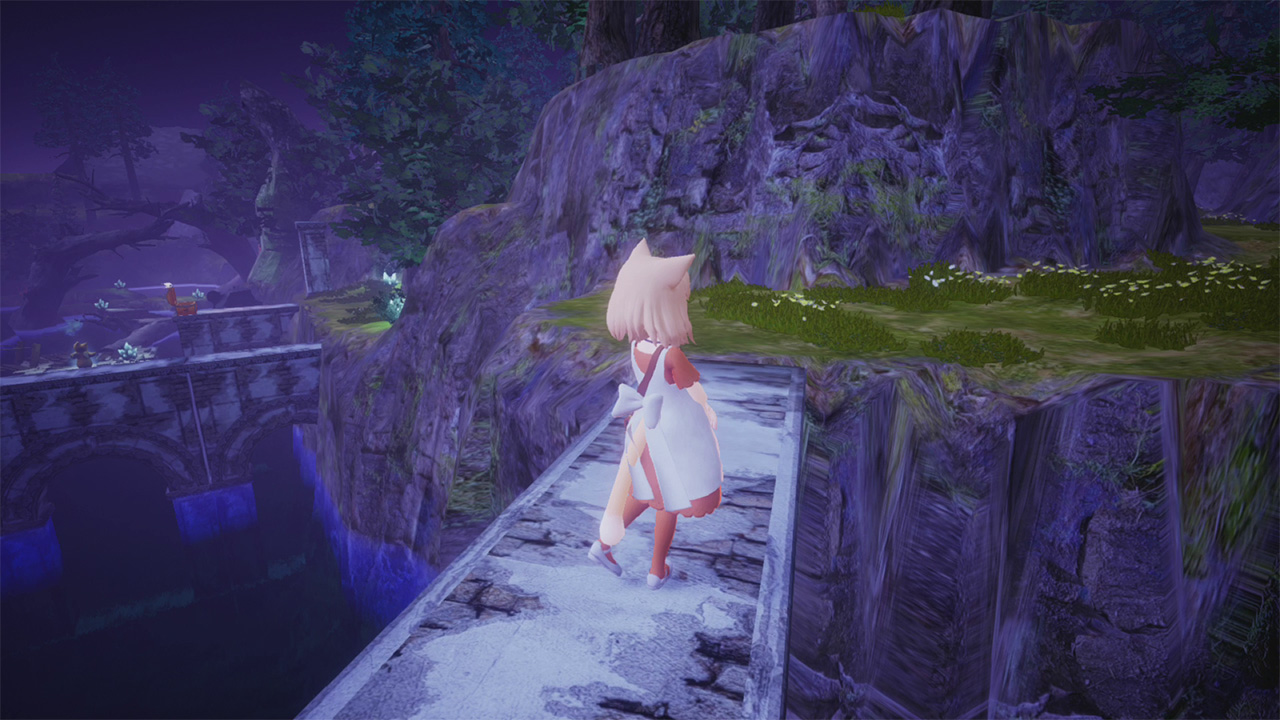 Performance is solid, while not 100% optimal across the board between TV and handheld mode, yet for Giraffe and Annika in particular it seems to favor handheld mode due to the sacrifices made to get it to run. It’s not necessarily an intensive game by any means, but lower resolution, draw distance woes, and pop-in are much less noticeable and forgivable on a smaller screen whether on a Switch or Switch Lite. The game just feels a lot more proper on the portable hardware as well.

The art direction is actually very pretty with presentations being done in a manga-esque style as you go into certain cutscenes, and the bloom and vibrant colors across Spica really help make it shine, but sometimes water and surfaces can look flat due to decreased shading and lighting as a whole compared to other platforms, and it has a Destiny Connect vibe to it, though the game doesn’t run anywhere near as poor on the Switch as Destiny Connect, especially when put up against other platforms. Giraffe and Annika is a respectable package that’s relaxing and a joy to play, and even with its drawbacks it still retains that feeling throughout.

From beginning to end Giraffe and Annika gives you beautiful locations to look at, and even the dungeons – which feels weird to call them that due to the nature of the game and how they look in general – give off a sense of exploration as you’re looking for collectibles called Meowsterpieces to add to the Spooky Gallery in Spica. This is the best way to get fun little upgrades like cosmetics to change Annika’s outfit. Each Meowsterpiece is incredibly cute and illustrated by different artists, so all give something unique and fun to look forward to. These collectibles are usually acquired by simply walking up to a chest containing them, but they’re scattered throughout the worlds and in dungeons, some cleverly hidden, others not so much. 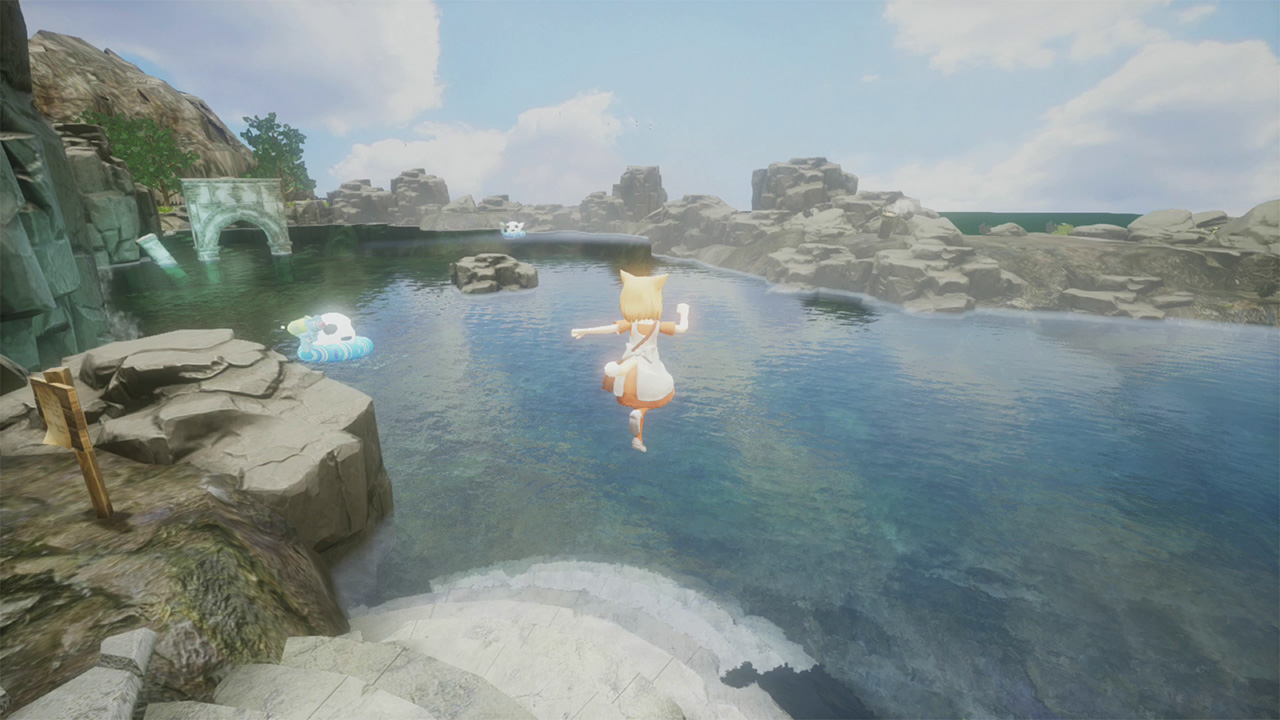 At the end of every dungeon, once you’re done exploring them and avoiding ghosts, you’ll always run into the evil witch Lily, who insists on facing you in rhythm battles. These make for a fresh spin on boss fights, and the big thing here also is you don’t have to keep going until they’ve lost all of their health. As you’re able to make it to the end of the song and you happen to have more health, you’ll be considered victorious. While these make for a unique and refreshing take on boss fights in a game that does a fairly good job meshing together a bunch of different genres, they’re actually my least favorite part of the game, which is super weird for someone like me to say due to my deep-rooted love of rhythm games. The rhythm portion of Giraffe and Annika is extremely simplistic, and the controls for some reason also feel weird and janky here despite usually only making Annika jump from the left and right sides of the screen to hit the notes that closely resembles orbs. The calibration is all over the place, even after manually tweaking them, and the songs themselves aren’t particularly exciting either.

Overall, Giraffe and Annika emphasizes relaxation and exploration and doesn’t really aim to penalize, so despite its rough edges and unpolished nature, it’s a genuinely fun experience that’s enjoyed when you want something simple to get lost in. The characters are cute, the art style is appealing, and the world of Spica has enough flavor surrounding it that it gives you something to look forward to around every corner. It’s unfortunate that only five dungeons at roughly 4-5 hours is all you really get out of it, but it’s a heartwarming package that means well and is great for all ages, mixing a ton of different genres to make for a mostly memorable experience. It’s certainly not trying to do anything new despite this, and it feels like a humble take on an adventure game that just wants you to enjoy your time rather than punish and work against the player. Giraffe and Annika has a big emphasis on keeping things serene, and finds a way to constantly exude charm around every corner.

Giraffe and Annika is a serene experience that offers a dungeon-crawling adventure, but removes the stress of heavy combat and death and instead replacing them with light platforming elements, exploration, rhythmic boss fights, and little to no penalties for failing certain tasks or depleting your health. Going around as Annika and finding collectibles while exploring a simple yet vibrant world is a perfect way to enjoy a world with tons to uncover without having to worry about the dangers in-between. Finding loved ones and going on adventures with best friends while helping people out along the way with activities like taking pictures and getting kids back in time for dinner make it a heartwarming tale of discovery and kinship, and while it’ll only last a few hours before it’s all over, Giraffe and Annika does well to give you plenty to look at if you didn’t take the time to really take it all in the first time around. It may not be the best-looking game and the game most certainly is far from polished, but Giraffe and Annika makes up for it with a short and sweet experience that’s great for all ages.