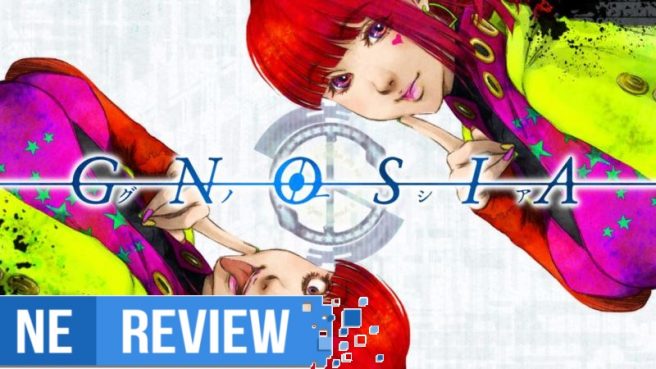 There’s an intriguing aspect to deducing fallacies, misconceptions, and lies that constantly keep us thinking deeper and trying to uncover any sort of truth in places where it’s difficult to do so. Crime thrillers and detective work have consistently been a genre and style of narrative that we gravitate towards as we feel as if we’re playing a part in what’s happening. Gnosia, which is being localized for the first time on Switch, offers that exact kind of experience. It brings with it a unique and fascinating dive alongside a new perspective into the visual novel genre by implementing elements not normally seen to keep it further engaging. Gnosia’s sci-fi visual novel mystery amalgam is excellent in every sense of the word, and its brilliance shines the further into it you get with each of its gameplay sessions.

The game sees an ensemble of crewmates aboard a spaceship that’s been infected by something called the Gnosia, an odd lifeform that can take the appearance of another being and manipulate them. Each time you start a new session, or “Loop”, you and others will have to discuss who might possibly be the Gnosia in question, and the quicker you find out the better, as they can be extremely dangerous and begin to take the crew out one by one every night if they’re not called out each day. You’ll have five rounds to talk amongst each other – defending, refuting, covering, making allegations, and doubting others as you come to terms with who to vote for at the end of each day. You, too, can become suspicious, be voted out, and then put into a cold sleep, where the loop will immediately end depending on how you play your cards. It’s a good idea to be attentive and work your responses as the AI is incredibly smart and will also make accusations or team up with you depending on what role everyone plays. Sometimes multiple Gnosia will be present, so a few days will pass before everyone settles on who’s infected and who isn’t, with collateral damage more than likely unfortunately occurring as some gang up on others only because they have a wrong choice of words, could be shy, maybe aren’t friendly in general, etc. Every day and loop is different, so your thought process has to constantly change, keeping you on your toes. 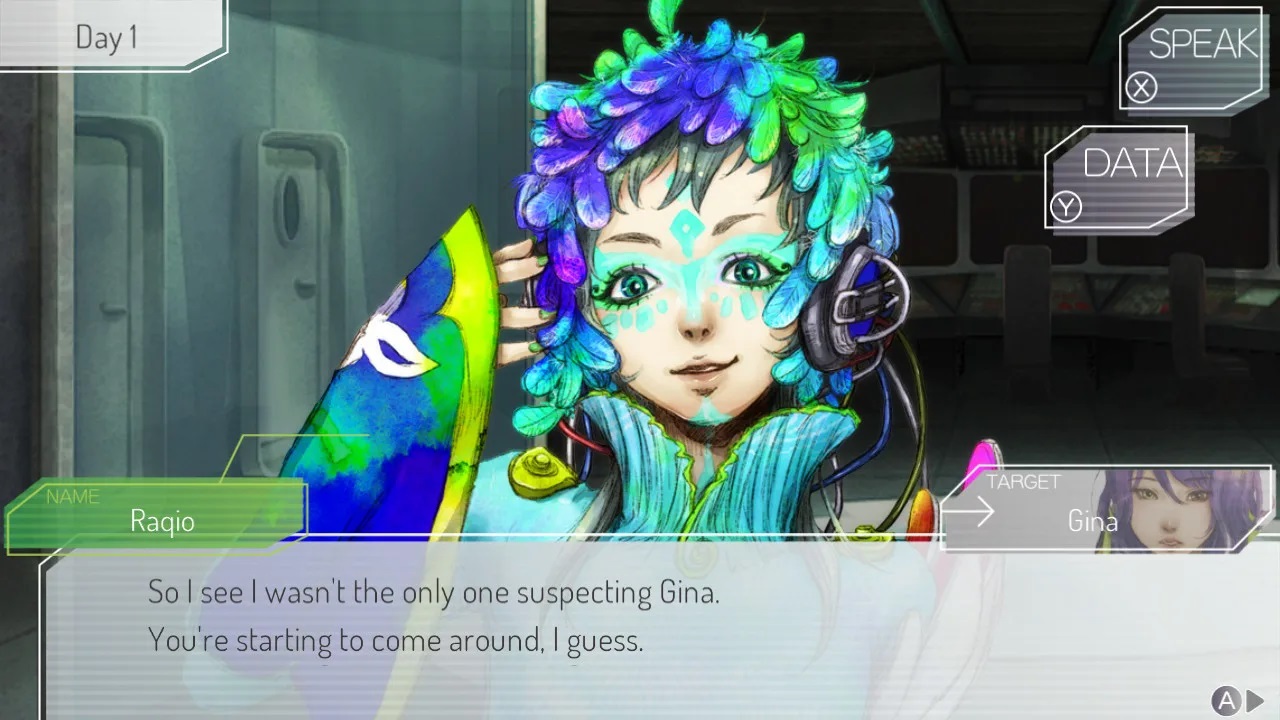 Singling someone out isn’t your only task, however. While each round of Gnosia’s gameplay only takes roughly 15 minutes or less, you’re still able to do quite a bit other than talk. You can to go from room to room on your ship and converse with others when there’s downtime between days as well as level up your character to help with deductions later down the line. While you’ll start at level 1, you’ll be prompted when you begin the game to choose a preferred bonus for certain traits, which will both help you survive and spot lies in other people’s testimonies. Conversely, you can also lie and be convincing enough if you have a high enough stat available. Alongside being able to choose non-binary next to male and female gender roles when beginning the game, you’ll have charisma, intuition, logic, charm, performance, and stealth traits to increase with your experience as you see fit, and raise them little by little as you progress through Gnosia’s loops. Roles play a key role also as not only to you happen to have your standard crewmates aboard as you try to debate about who the imposter may be, with each loop sometimes assigning roles such as “Engineers” and “Guardian Angels”, which can help (or deceive) reveal which crewmates are Gnosia, and protect certain characters from certain death after the day has concluded.

At first, especially for a visual novel, it seems like a lot of information to take in as you’re just kind of immediately dropped into a conversation followed by a debate as if you just got thrown into the deep end of a Phoenix Wright case. Opening up the menu doesn’t help much either as you’re introduced to a few sections that allow you to look at various information collected for crewmates, voting results, discussions, reports, and more. However, through basic trial and error with the first case practically being a “give me”, you’ll learn the ropes and be able to navigate the menus and game with ease thereafter. A variety of elements keep the game consistently fresh as to not become stale, with being able to travel from various parts of the ship to an increasing number of Gnosia, sabotage, sudden attacks dwindling numbers, and just about every twist imaginable that can come at any moment keep you consistently on your toes while enjoying an ever-evolving narrative in bite-sized yet fulfilling sessions. 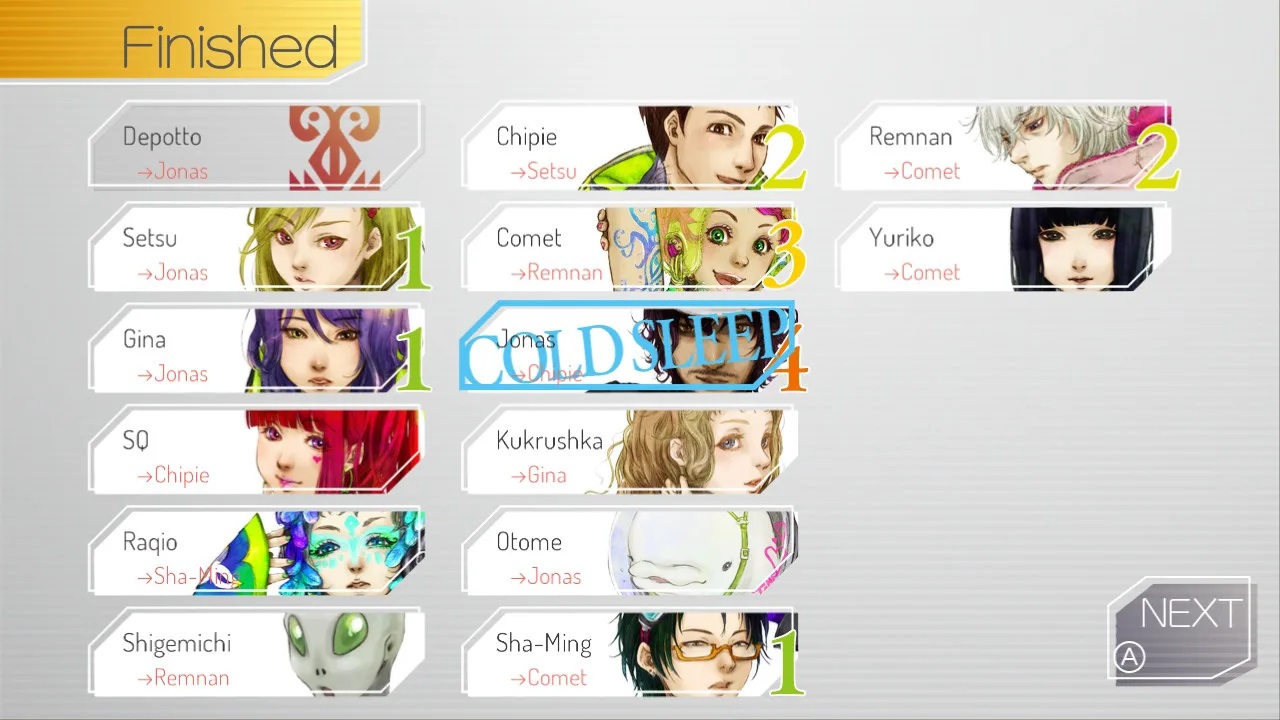 Gnosia is an in-depth visual novel experience that does more than just tell a linear story through kinetic means, and the dialogue choices actually play a huge part in how things turn out. Even though they’re preset responses and actions for you to choose from, who you accuse or defend is always different, and it’s no doubt that it’ll get comparisons to games like Among Us where an imposter – in this case “Gnosia” – or imposters will aim to deceive to achieve their goal while others protect and defend while continuing to deduce. However, Gnosia’s entire presentation puts it on a whole other level and feels a lot more methodical compared to other games that pit a bunch of people together with one or more of them being in on it.

Gnosia’s music also sets the tone and atmosphere regardless if you’re in a debate or in between days as a combination of post-rock, ambiance, metal, and electronic surge from room to room, menu to menu, and loop to loop, making some of the one-on-one encounters with some of the crewmates you may have animosity towards (or even suddenly romantically involved with) become intense and heart-pounding, especially knowing that it’s hard to trust anyone in such a short span of time, so your deductive reasoning will have to be extremely refined when making every move. Talk too much, and you’re suspicious. Say too little, if anything at all, and you’re suspicious. You’ll need to find that fine line where you can blend in regardless of the role you take so you can spot out who’s who, because not everyone is who they say they are, and it’s part of what makes Gnosia so thrilling is its rapid-fire detective work that’s beautifully crafted and written with an art direction that undoubtedly makes it stand out from the rest.

For those like myself clamoring for an intelligent, science fiction lathered visual novel like the Zero Escape or Science Adventure series to captivate you, Gnosia is the new excellence in unique, thought-provoking narrative and gameplay. While primarily a visual novel, the elements of scouting out the infected liar – the Gnosia – by paying attention to what everyone is saying in such a short time frame is thrilling as you’ll have to make quick deductions to ensure the ship’s safety. The loop system that keeps the game fresh and innovative by allowing for quick sessions with a substory and different Gnosia every time makes the game palatable to a wide audience while also incorporating an odd sort of “arcade” like nature to a visual novel I’ve never seen before. Gnosia’s art, music, and intuitive interface marry together to make one of the most beautiful packages I’ve ever seen. It shines on both the big screen and in handheld mode, easily making it one of the most standout, unique, and best visual novels of all time, backed up by panache, style, and brilliance in every corner.