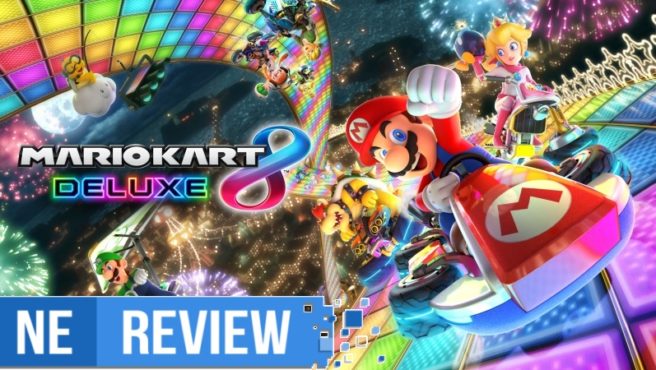 Two years ago, I wrote an article on my relationship with Mario Kart and how Mario Kart 8 revitalized the series. In making that game, Nintendo reignited the magic I used to feel towards the franchise during the N64 and GameCube days. Mario Kart 8 shed a whole new light on kart racers and the potential they had at a time where most felt stale or rehashed, with Sonic & All-Stars Racing Transformed being the new “king” of that genre before Mario Kart 8 returned to reclaim. Now in 2017, we’re back with the definitive version of one of Wii U’s best titles on its successor, the Nintendo Switch, with Mario Kart 8 Deluxe. It’s as extravagant and beautiful as it was on Wii U, but this time with a revamped battle mode, all DLC included, a few new features, and plenty to love all over again.

Despite the familiarity having spent so much time on Wii U, Mario Kart 8 Deluxe feels new again given its small touch-ups and new ways of playing with the Switch giving the option of portability, multiple controller support including each Joy-Con being used separately, and a few all new characters and items. With the DLC from Wii U now included, unlocking content is relatively straightforward. Every 30 coins that you collect cumulatively throughout all races will unlock a new vehicle customization item. The entire roster of characters are mostly unlocked from the start – DLC characters such as Link and Animal Crossing, as well as newcomers like King Boo and the Inklings – and getting 30 coins is relatively easy as most will be able to do this probably within the first race of the typical four per cup, so building up your arsenal of motor vehicle mayhem shouldn’t take too long.

When you’re out on the racetrack and your Switch happens to be docked, Mario Kart 8 Deluxe presents itself in a stunning 1080p image running at 60 frames per second that brings to life Nintendo characters like never before. While those who played a hefty amount of the Wii U version will probably feel comfortable jumping back in, the inclusion of new items such as Boo (which steals your items) and the feather (which causes a super jump as if you were hopping off of a ramp in battle mode) plus the pink boost while drifting will have players rethinking their strategy while racing. 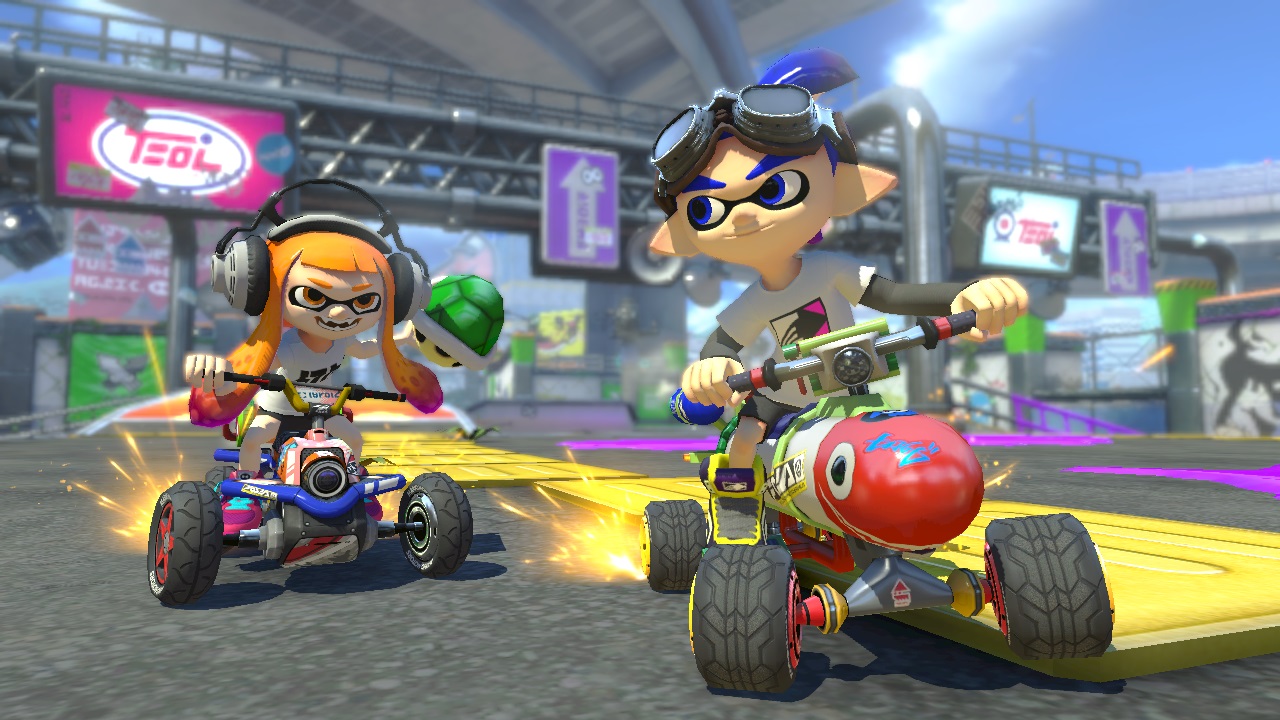 The big addition advertised with Mario Kart 8 Deluxe is its brand new battle mode, which was its most lacking feature in the Wii U original. Battle mode has always been beloved by fans since the beginning, and was undoubtedly a highlight with most large gatherings thanks to its unpredictable and frenetic game modes, but in Mario Kart 8, it had been restricted to courses meant to be driven on rather than dedicated arenas where players would do their best to survive. With only so many characters occupying the battle mode and such large tracks to play in, it was difficult to ever find anyone, and most people would just go in circles anyways.

Now with Mario Kart 8 Deluxe, battle mode has been brought back to its rightful glory and has plenty of modes to choose from and a nice selection of dedicated arenas. The maps are insanely fun and just the right size, and with modes like Bomb Blast, where the objective is to gather as many bombs as possible and throw them at your opponent, and Shine Thief, a fancy alternative take on capture the flag where players try to obtain Super Mario Sunshine’s shine sprite and hold on to it as long as possible, these are undoubtedly going to take a whole bunch of hours from everyone’s days as they duke it out at home locally, on the go, and online. Renegade Roundup is also appearing for the first time in which one team tries to capture the other and put them into jail before time runs out. The new battle mode is a welcome addition, and those who felt betrayed by what was in Mario Kart 8 on Wii U will be happy to know that this was well worth the wait, and possibly the best iteration of it that’s been implemented so far throughout the series.

Those ready to take the world by storm will be happy to know that Mario Kart 8 Deluxe has an incredibly smooth online mode that is just as clean and user-friendly as it was on Wii U – but now with added features. A great thing about Mario Kart 8 Deluxe missing from the Wii U version was the inability to change your character or setup unless you exited out entirely and started over again. This would get frustrating, especially when playing with friends, so now being able to do so between each race is a welcome feature that is sure to be used by many. This no longer makes the gameplay disruptive, and allows for a more fluid and seamless multiplayer experience. 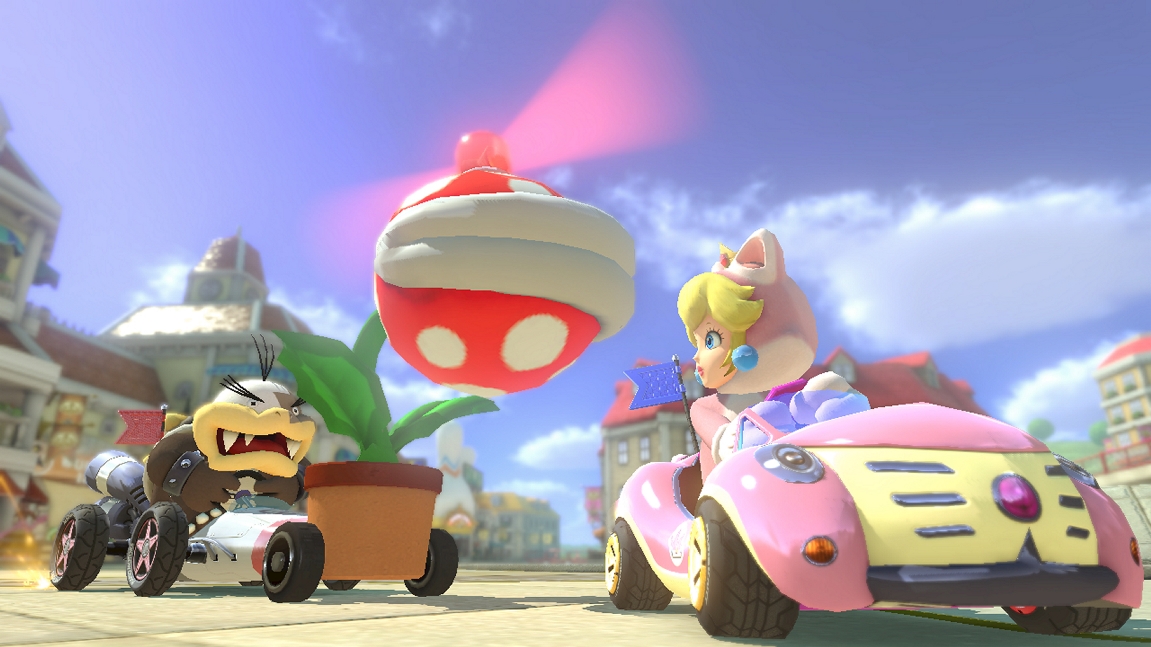 The only small gripe with Mario Kart 8 Deluxe, with everything else it’s gotten so right with polishing and new features, is that its new drive and acceleration assist, which may help some, feels a little unnecessary. There’s a point when accessibility and hand-holding are no longer either of those things and simply become you doing nothing but still wanting to take the credit for it. By turning these options on either in the selection menu before a race or pause menu mid-race, the game will actually help you with turning and acceleration. The thing is, you can actually just set the controller down and “you” will race on all “your” own. I’m sure there are some that will find it helpful – mainly the auto correction so you don’t fall off the road – but these aren’t so much training wheels as they are just completely invalidating anything that you do. This is especially true when, with those options on, you can obtain three stars on 50cc without ever having to touch the controller. You can even do rather well in 100cc and 150cc, too.

As someone who absolutely adores Mario Kart 8 and spent more time on it than most would like to admit, I am beyond happy to see Mario Kart 8 Deluxe return on the Nintendo Switch. Not only is this a great fit for it with all its extra content and inclusion of previous DLC, but now having the ability to play both at home and on the go while having it look and run just as well is truly a beautiful thing. If you have other friends who own a Switch, you can play locally together outside, or for those that haven’t been able to grab one yet, Mario Kart 8 Deluxe features single Joy-Con support, so simply hand one side over to your buddy and you’re ready to go. After a month and a half of Breath of the Wild and some great indie titles in between, Nintendo’s next big hit, albeit an updated port, is ready to take over your life and give new life to such a fantastic entry in the long running series. Mario Kart 8 Deluxe deserves to be on everyone’s Switch, and if you have friends and a solid internet connection, the game will undoubtedly provide hours and hours of content and fun to last you until the next big thing comes out. Mario Kart 8 Deluxe isn’t just definitive – it’s refreshing, beautiful, and familiar all while taking the spotlight once again.

Mario Kart 8 Deluxe brings over one of the Wii U’s best titles to the Switch in a package that feels as full as it is refreshing. For those who may have skipped over the Wii U because they didn’t own one or never got around to it and now are proud Switch owners, this is a title that everyone is going to want in their library to finally get a chance to play – and rightfully so – at home or on the go. The ability to be able to play anywhere at anytime and with anyone else makes Mario Kart 8 Deluxe an even bigger and more fun multiplayer experience than it already was back on Wii U. With the simplicity of the controls, the gorgeousness of the graphics, the vibrant colors, stellar soundtrack, a much needed revamp to its battle mode, and an even bigger roster, Mario Kart 8 Deluxe is a truely definitive experience and well worth throwing down the money for it all over again. For a game that’s technically turning three years old this year, it feels brand new again.