Posted on November 7, 2021 by Nicholas Serpa in Reviews, Switch 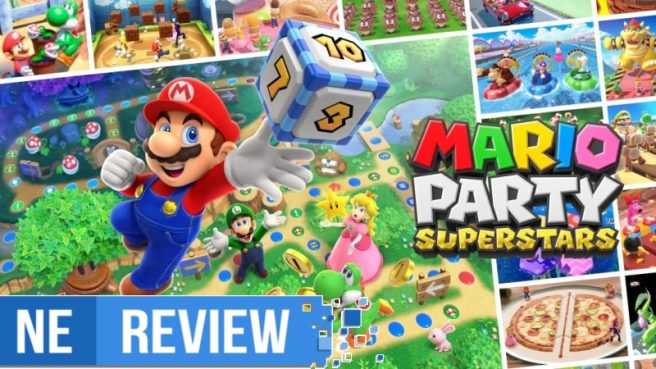 I’m a big believer that the best board games are those that remain exciting and engaging regardless of whether you’re in first place or fourth – a simple enough concept on paper, yet one that’s not always so easy to execute. But Mario Party has (almost) always excelled at providing the sort of unpredictable, chaotic multiplayer experience that can deliver ample opportunities for family fun, thanks in no small part to its polished mechanics and varied mini games. Recent games in the series haven’t always hit this mark, though – Mario Party 9 and 10 scrapped the standard board game progression in favor of a controversial “travel-as-a-group” gameplay flow, and Super Mario Party alienated many handheld players with its high reliance on motion controls. Now with the release of Mario Party Superstars, Nintendo is returning to what worked by bringing back mini games, boards and mechanics from older games in the franchise – but is that enough to reinvigorate this over twenty-year-old franchise for modern players?

Well, it’s certainly still Mario Party, that’s for sure. If you’ve ever enjoyed sprinting around Mushroom Kingdom-themed game boards while competing in wacky, edge-of-your-seat minigames in previous entries, than you’ll almost certainly enjoy Mario Party Superstars. Likewise, if you have nostalgia for any of the older games in the series, than there’s a good chance that something in this package will bring back a memory or ten for you. If you’re looking for innovation, though, then look elsewhere as Superstars is interested solely in polishing and refocusing on what the series previously excelled in – a good thing, and I’d argue exactly what Mario Party really needed for this release.

The basics of Mario Party Superstars are simple – select your favorite of ten classic Mario characters and roll dice to travel around a game board, with the ultimate goal being to collect more Stars than your opponents. Stars are purchased at a specific spot on the game board (that often changes position, mind you), and doing so requires coins, which are mostly earned through doing well in brief but rewarding minigames that range from racing slot cars to counting Goombas as they sprint by. There are plenty of opportunities to sabotage your opponents, too, often initiated by changing up game board itself in clever ways. 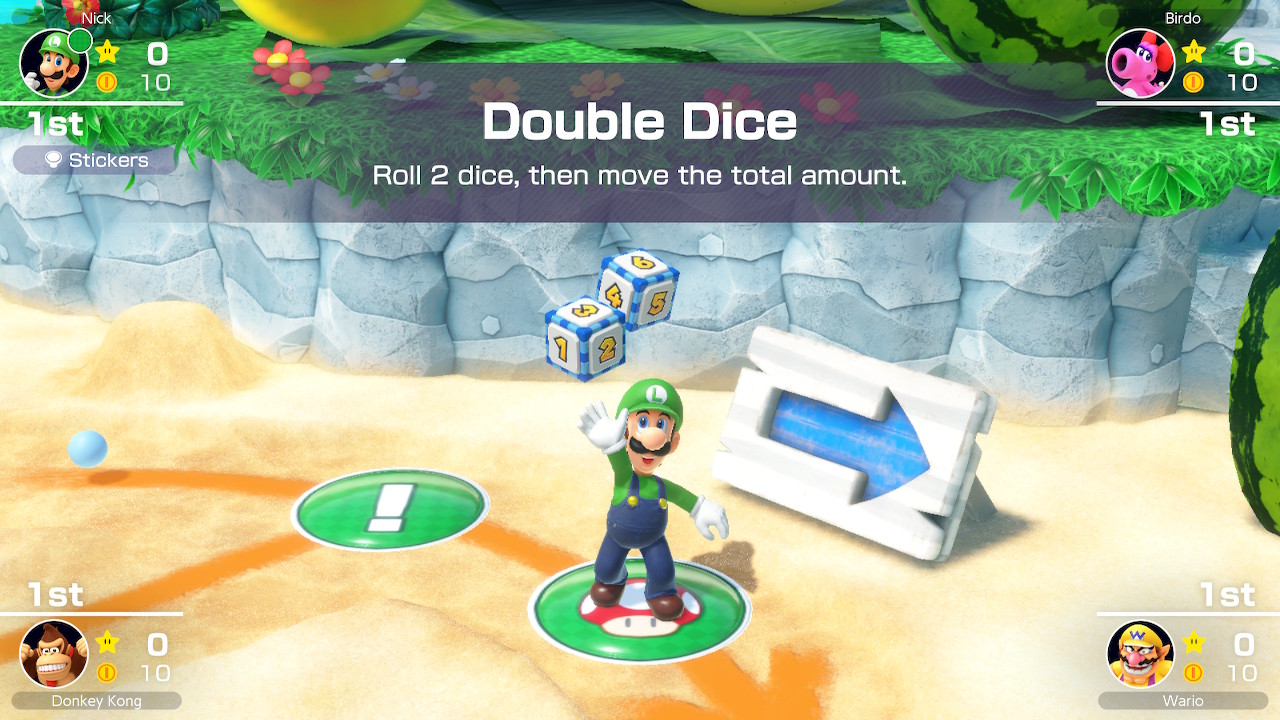 It’s all designed to be easy to pick and play, and yet there’s a decent amount of room for more advanced players to try and strategize and create opportunities to propel themselves ahead of the pack. Since it had been over a decade since I last played a Mario Party game, I decided to get myself into the groove by playing a few matches against AI-controlled opponents before playing against real people. Each of the five game boards in Mario Party Superstars has its own unique gimmicks that can shake up the flow of a match, and while these boards were all brought over from older Mario Party titles, Superstars marked my first time experiencing them. But it really only took me a single match on each one to begin to understand their nuances, and challenging the AI was a surprisingly engaging way to play – they tend to behave quite like real players more often than not, which caught me off guard (in a good way).

I was rejoicing at how smooth the online experience was, too. You certainly can’t expect a reliable, optimized online gameplay session in many first-party Nintendo games nowadays, so I almost couldn’t believe how much work has seemingly gone into making online matches feel stable and fun to play. Full games of Mario Party can last for a while in Superstars, but if a player drops out of your online session, the game simply replaces them with an AI opponent for the remainder of the game to avoid interruptions. It’s so subtle that you may not even notice it happen, which I appreciated. And while I occasionally experienced some slow connections in a handful of the mini games, it never was a consistent problem for me by any stretch. Granted, I have a pretty solid internet connection myself, so your mileage may very well fluctuate, but my personal experiences were nothing but positive.

My favorite board in Super Mario Party is Woody Woods, in which the main gimmick are wooden sign posts that periodically change direction upon being spun by a Monty Mole. It’s pretty satisfying to screw over an opponent by making them change direction as they’re only a few places away from the star, and it’s infuriating (in the best way) when someone does the same to you. Another board, Horror Land, does something similar by closing off certain routes during the night time, but adds other wrinkles to make things more complicated. For example, if you manage to save up a whopping 150 coins and can unlock a gate at the right time in the game, it’s possible to pay off a giant Boo to steal a star for you from each of the players, which can instantly turn the tides of the entire game. The other three boards in Superstars similarly have a unique mechanic or two to them, and all of them were a blast to play on. 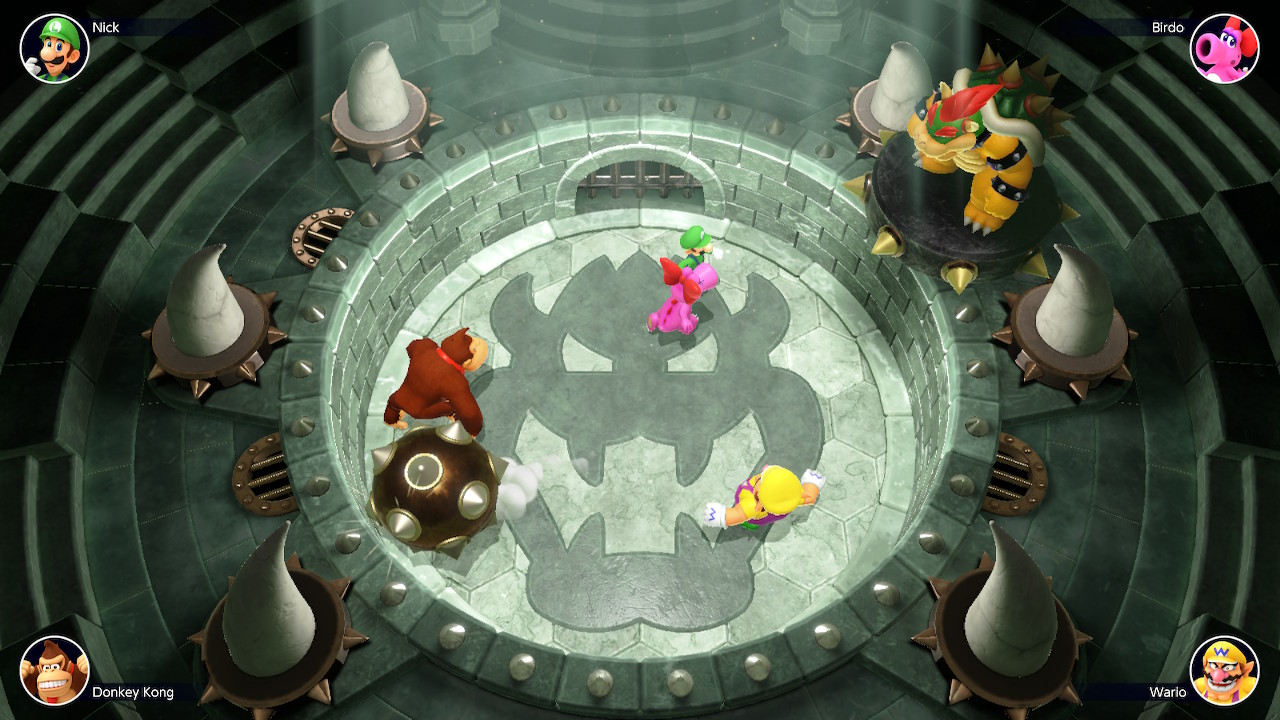 After all four players have a completed a turn, a mini game is triggered that will test everyone’s reaction times, platforming skills, finesse, memory, luck, or some combination of those. There are over 100 mini games in Mario Party Superstars that have been modernized and brought over from previous entries, all the way from the first Mario Party game through Mario Party 10, and I can’t think of a single one that I didn’t enjoy playing. All of these minigames use only the control sticks, triggers and face buttons for their controls – there’s no touchscreen or motion-dependent games here, which means every one of them can be experienced in both docked and handheld play. That wasn’t the case in the last Mario Party title, so it’s a welcome change that makes the entire package more accessible to players. I particularly enjoyed the selection of 1 vs. 3 minigames here; it’s a blast, for example, to try and ground pound your opponents off a platform in “Tidal Toss”, and then later experience those same odds stacked against you when the roles are reversed.

All of the mini games can also be enjoyed outside of a full match of Mario Party by visiting Mt. Minigames from the hub menu. From here, players can not only play each game individually and attempt to beat their own scores (or those of others), but also jump into a variety of challenge modes. The most interesting of these is Survival Mode, which pits you against other players to see who can maintain the longest win streak before being eliminated – it’s truly humbling to have your ass handed to you in a minigame you previously felt you had mastered, and that’s something you’ll experience quite a bit here. I also enjoyed Daily Challenge, which refreshes each day with sets of minigames grouped around a particular theme – climbing, for example – and challenging you to win more of the games than your rivals.

Fundamentally, there’s nothing earth-shattering about any of this – these modes all sound nice and varied on paper, but really they are just different ways to experience the same content. Some will love that, and others will find it vapid; personally, I think the mini games are most fun in the context of a full match of Mario Party due to the higher stakes, but folks who enjoy score-chasing will certainly have plenty to dig their teeth into. 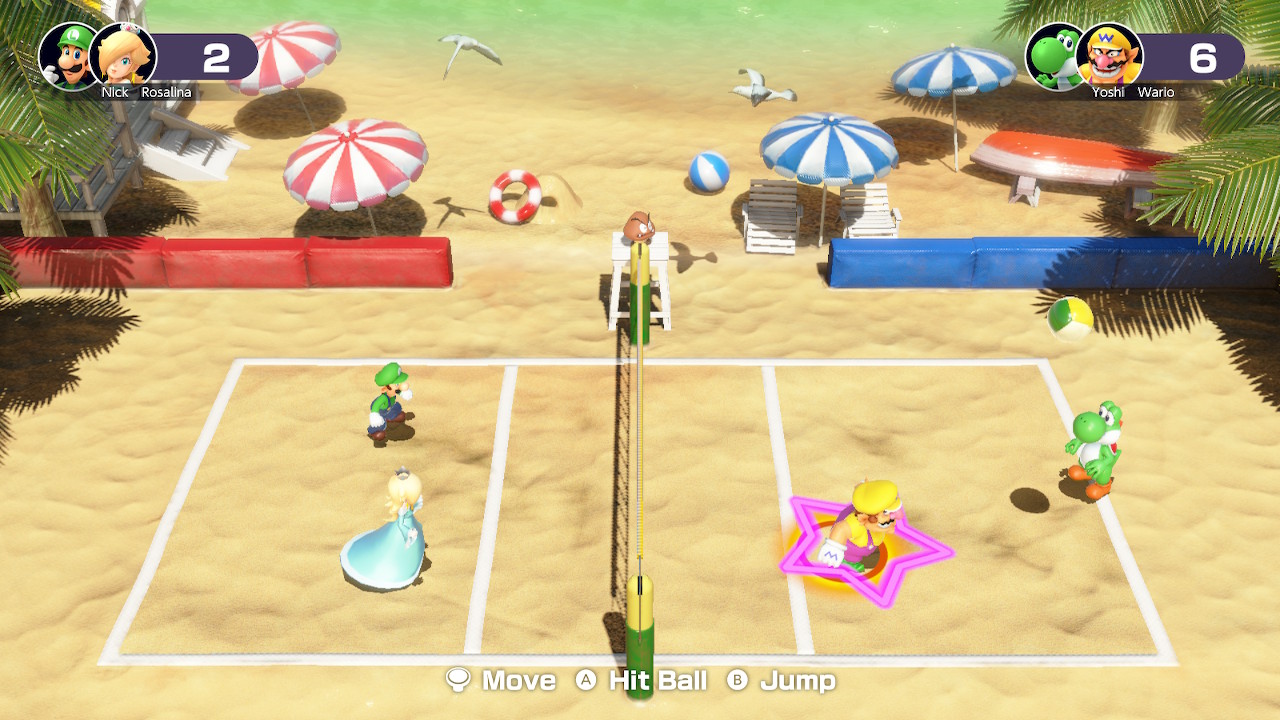 Notably, it’s now possible to filter out mini games you don’t want to play during a standard match – so, for example, if you really despise challenges that are based solely on luck, it’s now possible to remove them from the rotation when playing a round of Mario Party. That doesn’t apply to online play against strangers, unfortunately, but it’s nice that people playing locally can elect to customize things to their liking. Other notable quality-of-life features include the ability to add turns to a game (for those moments when you KNOW you just need a FEW more turns to get caught up) and the ability to turn off the awarding of bonus stars at the end of each match. In other words, it’s much easier to control how much randomness occurs during your playthrough now. I think a big part of the fun in Mario Party is when an unexpected turn of events changes the tide of the game, but I’m sure plenty will appreciate having the choice to opt out of some of it.

Visually, Mario Party Superstars shines brightly on the Switch’s aging hardware. It’s certainly the most vibrant, energetic game in the series that I’ve played, and it’s stunning to see how much attention to detail exists in every ounce of the experience Character animations were a huge standout for me – I can’t recall the last time Mario and company were so expressive and fun to watch. Boards are also strikingly beautiful, especially when compared against those they appeared originally in their Nintendo 64 and GameCube renditions. It really elevates the experience into what feels like a premium offering from Nintendo rather than some B-tier production.

Mario Party Superstars may not be awash with truly new content, but it’s without a doubt the most polished, comprehensive entry in the series to date. Filled to the brim with different ways to play for both single players and those who prefer to play with others, Mario Party Superstars reinvigorates iconic boards and minigames from the series with immense flair and more options than ever before, all while honing in on the mechanics that made this series so popular to begin with. Online play is a marked improvement from previous releases, and the game caters to the demands of longtime series fans while also acting as a great jumping-in point for newer fans. Whether you plan on partying alone or with friends, Mario Party Superstars is unlikely to disappoint and is an exciting return to form for the franchise.

Mario Party Superstars copy provided by the publisher for the purposes of this review.