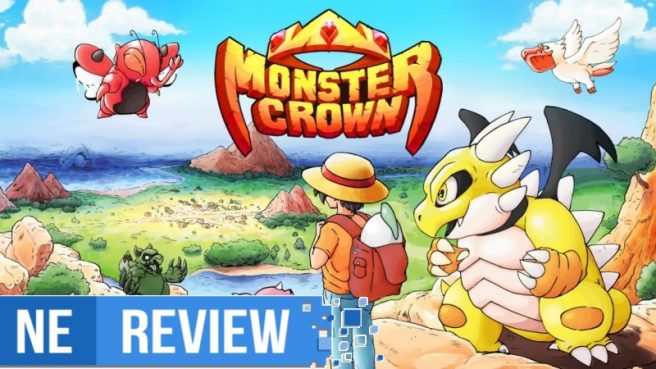 There’s something to be said for a good battling experience. Monster taming games have dominated the handheld gaming scene for decades now, and looking back through their history, some of the best gems were games with less-than-stellar graphics that boasted a huge roster of monsters, breeding mechanics, and a simple-to-pick-up battle system that promotes changing up your teams on the regular in order to take on foes of various types. As a result, we’ve seen no shortage of developers vying for a slice of the monster-taming pie, but are all monster catching adventures created equal?

Monster Crown begins with the player being able to choose an avatar, name, and pronouns, showing that despite being a throwback to the older days, there is still room for modern change. The story follows the player taking on various tasks from their father, catching a few monsters here and there to help out on the farm before ultimately taking off on an island-wide adventure. Most of the game will follow this sort of linearity – forge pacts with some monsters in lieu of catching, fight a guy, fulfill a task, take on a new task and fight more things along the way. Monster Crown doesn’t take too many risks there, but where the game does break the mold is in it’s world building. 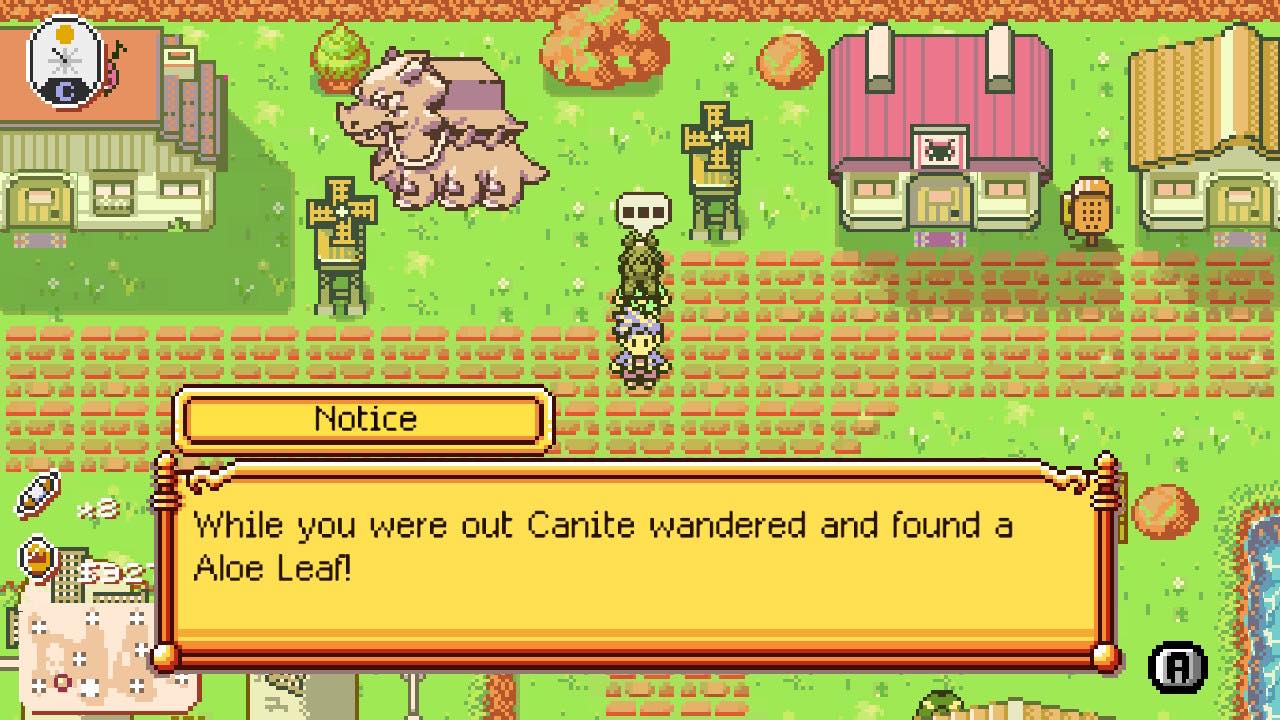 Monster Crown isn’t afraid to show the darker side of a world overrun with strong creatures, and the effects that seeking strength can have on an individual person. In this wild world, the strong can easily become corrupt: taking over a town’s entire economy, for example, and while wealth-hording may not be the most evil that one can be, it does ease you in to the darker aspects rather early. Power does can be hard to handle after all, and its not just humans one needs to be wary of.

Monsters themselves are not keen on the idea of being friends, generally. The world is full of creatures that aren’t averse to seeing bipedal hominids as unwitting sources of food when caught on their own, and they will happily munch on anyone foolish enough to wander into their territory: a fact cemented very memorably early on and one that we become increasingly mindful of as the story progresses. Not everyone or everything is out to be your friend. This is a fact.

Players will find that monsters in the overworld are plentiful, and battles are initiated by walking into them rather than encounters being completely random while walking in grass or caves. Forging pacts with a lot of monsters early can be helpful, but paying attention to the overworld sprites for things that look different from the usual chaff may have you discovering unlisted crossbreed species that are not normally found in the wild. While these spawns are significantly more rare, they can be really cool to discover and you even get to name the new species. Breeding does open up later on, but some of the best moments I had early in the game were the ones where I was gunning down an unfamiliar critter and hoping for another interesting crossbreed. 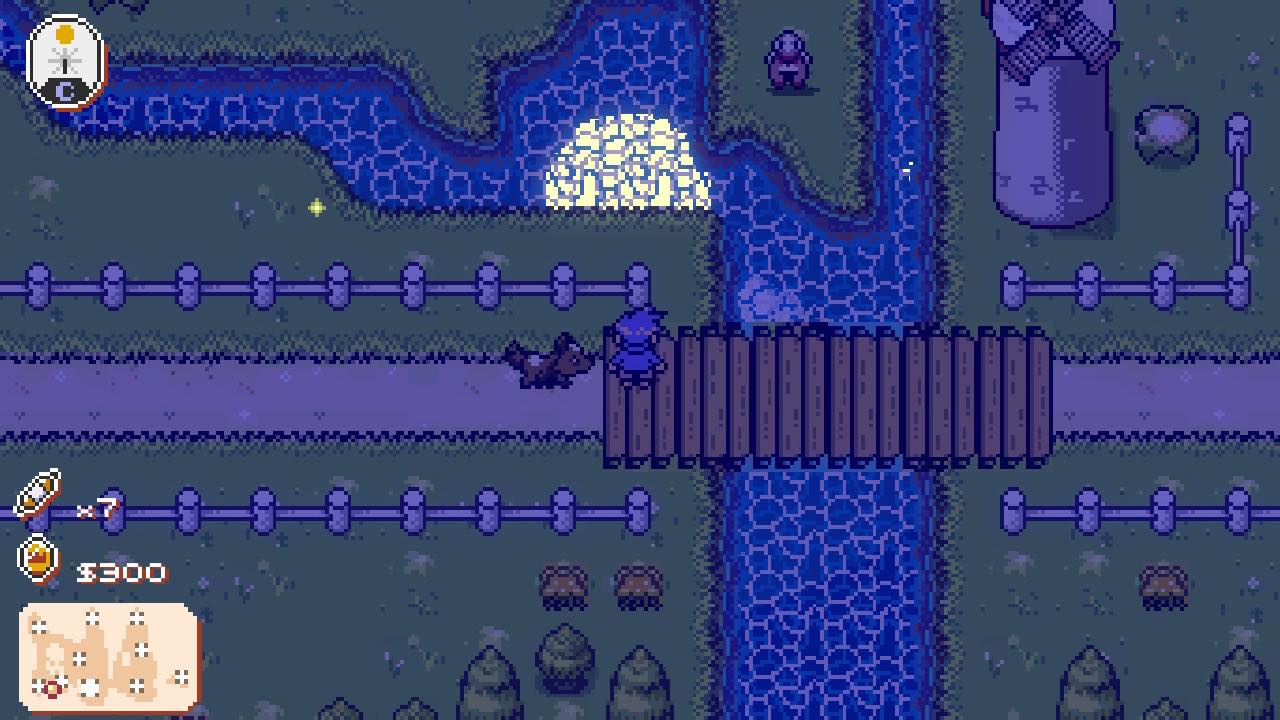 Battles are turn based, with simple controls that allow the player to attack, use items, try for a pact with a monster, or flee. Monsters are divided into different types with strengths and weaknesses to the different matchups. Early in game, the player will earn an item that allows them to view the type matchups whenever they would like outside of battle, which I recommend getting familiar with as soon as possible so that you can take advantage of each monster’s strengths.

While type advantages can definitely work well and in your favor, another thing to be mindful of in Monster Crown is that there is no rarity or evolution. A bred monster will usually have better stats, and while your critter’s type may work to your advantage in most battles, a glaring type disadvantage could have your monster down and out in a single shot with little to no warning and no jarring difference in level. It’s easy to stick to monsters that we think are cool, but early on in Monster Crown, its almost impossible to progress without pacting a few strong creatures to keep at your side. Keep an eye on the level of monsters as you go, and fill in your team’s weaknesses with strong creatures to better round out your roster. 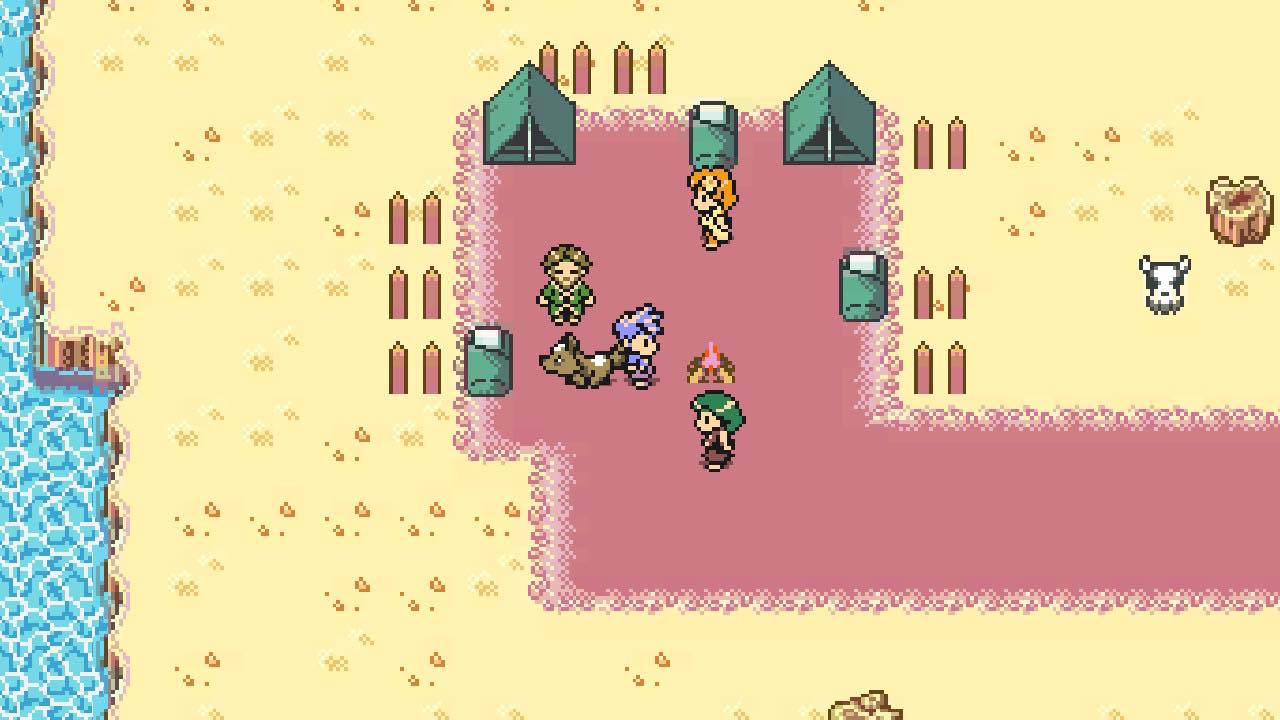 Monster Crown’s appeal to the Game Boy Color days is executed very well from a visual standpoint. With having a backlit and much larger screen, they do a great job at using pixel assets to create a very colorful and engaging world. Rich lore and storytelling create a very immersive adventure that is easy to get lost in, and quality of life additions like fast travel and monster renaming are beautiful additions to an old but gold recipe. With all this, we have a clear cut path to a great game, but there’s still a glaring point that we haven’t discussed yet.

This current build, despite a pre-launch update is afflicted with several bugs that can cause players to lose progress. Saving early and often can mitigate some of this, but as of this writing I can still point out that the introduction to campfires after exiting the cave from Mill Town will always cause my game to completely freeze with no ability to reset aside from completely closing and relaunching the software. An earlier build had menu glitching, and there are still to this day some scenes that can cause the player character to walk and simply keep walking entirely off the map – yet another time when the game will need to be relaunched entirely. All of this aside, I still have came back to the game, learning to adapt to these issues and try to overcome them. I also know that I have a lot more patience for these types of things than some, and that in its current state, this could be a huge deal breaker to many.

Despite the issues I’ve experienced, exploring the island with my new companions has been highly enjoyable. Finding items, seeing wonderful lighting effects like the moon reflecting on a lake or stream, or even seeing a large monster barreling toward me for a fight have been absolutely amazing experiences that have taken a lot of my memories of Pokemon and Dragon Quest Monsters, and shown me what the natural progression for those series would have been had they stayed on Game Boy Color a while longer. The breeding mechanic alone is absolutely addictive, and being able to breed using the monster genes of a friend, as well as having functionality to fight and trade wirelessly gives me hope that in the future, this will be a game with a large fan following and a surprisingly in-depth meta for battling.

Monster Crown is in a difficult state right now, and as a game fresh out of Early Access, putting it immediately on Switch is certainly ambitious, but does the player base no favors. While a lot of the aspects of the game feel amazing, the lack of polish is certainly daunting, and it leaves one feeling as though they are playing a game still heavily in beta rather than a finished product ready for market. Inescapable cut scenes, broken camping mechanics, and other glitches that cause the player to need to reset the software and lose progress are forgivable if they are a once in every six or seven hour occurrence, but the frequency of game-ending bugs that are encountered in this currently build are not something that a consumer should have to trudge through, and not something that a developer and publisher should be pushing out to us. More time is needed for this game, but I can say with confidence that once these issues are ironed out fully, we are in for quite a treat.

Monster Crown copy provided by the publisher for the purposes of this review.