[Review] NEO: The World Ends with You 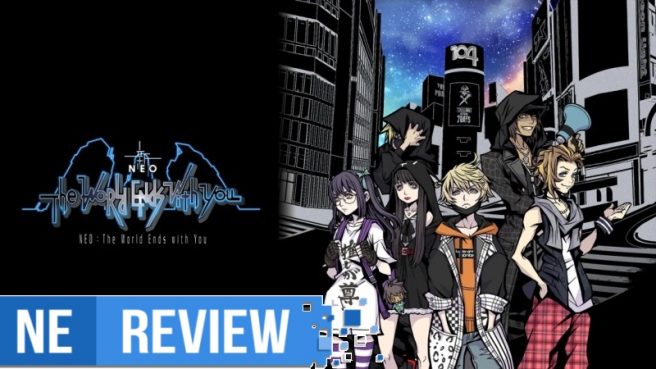 My very first introduction to Shibuya was alongside Neku and Shiki in their first week of The Reaper’s Game. The colorful rendition of the city alongside a masterpiece of a soundtrack didn’t fail to snare me in their net, and before I knew it I was three weeks into a game that really spoke to me about what it is to be alive and experiencing the world alongside my fellow human beings. When a sequel was announced, I wondered: what kind of follow-up could shine alongside such an artful game as The World Ends With You? Would it really be up to par with the first title? Now, with the game in hand, it’s time to find out. What will NEO bring to the table, really?

This time we follow Rindo and Fret, two teenage boys hanging out in the city together to spend some time. Following a chase after a rare collectible pin, the boys begin to witness strange events, and Rindo has a premonition that ends with a messy death for Fret. Using this knowledge, Rindo is able to turn back the table and prevent the event from happening, which puzzles him almost as much as the predicament they find themselves in. What is this strange Shibuya, overrun with monsters? Why can’t the boys contact anyone else outside the game, and how did they get dragged into the game in the first place? Finding the answers will take a lot of effort, and with just the two of you… may seem impossible. While Fret seems not to worry nearly as much, Rindo does have his woes about the predicament. The duo has to move on though, and Fret, dubbing their team as “The Wicked Twisters” may not be as stressed about it as Rindo, but his good nature does prove to be a rock that Rindo can lean on.

The boys continue in the first week of the game without a lot of knowledge about what they’ve landed themselves in. How did they get into this game? Why does everyone else seem to know so much more about it than they do? When going through the week, they make a few new friends, notably Sho Minamimoto himself tags along with the group. Minamimoto doesn’t seem to want to be friends, and doesn’t take the missions too seriously, but does provide a helping hand early on while watching the party. When the addition of the fourth member occurs, Minamimoto takes special interest in Rindo’s ability to turn back time, making calculated decisions to influence the flow of the next few days. His special interest in the group is not uncommon. Other players and even the Reapers want to see the kids shake things up – apparently the Ruinbringers have been at the top for way too long, and while the winning team gets to make a wish at the end of the week, the losers get erased. The Ruinbringers wish is always the same thing: to play again. How long have the other teams been trapped? 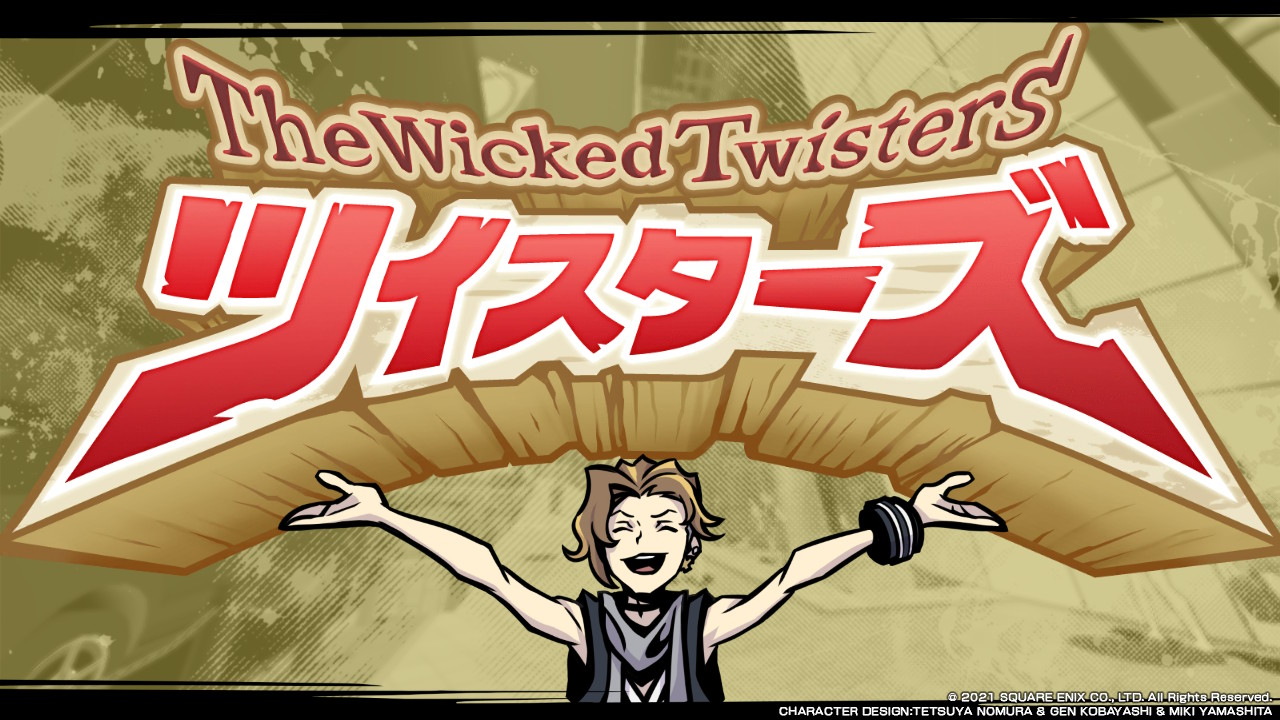 Fighting your way through each week is necessary to complete missions and earn points. In order to bring the Ruinbringers down, the group will need to complete tasks via riddles and battles. Noise are the monsters that inhabit this version of Shibuya, called the Underground, or UG. The creatures can inhabit people as well as being scattered around the city. Rounding them up on screen causes battles to chain, stacking up to five times in early game, more can be added to the chain later on. Taking out battles in quick succession allows for a fast collection of resources, experience points, and pin points, all of which are necessary to develop your characters and abilities and ultimately bring defeat to the Ruinbringers.

NEO does a great job at separating control between characters in battle. Each character can be equipped with a Pin for the fight, which gets assigned to an action button. In combat, by pressing the assigned button for each character you can switch between them fluidly and chain attacks. Chaining attacks becomes very important for raising the Groove meter, which at 100% allows the player to unleash a party move that can increase the damage done to enemy Noise as well as provide an area of affect with extra elemental damage. The elemental damage specified with this party move is based on the elements equipped by the team, so with fire damage you can unleash a massive fireball and with electric, pillars of energy will explode around you. Taking advantage of elemental weaknesses can see a massive increase in damage, cutting down the amount of time in a fight and helping to earn a higher rank with more rewards.

While multiple pins can be equipped by the party, there are some limitations. Pins cannot be stacked on the same input, for example, so only one pin can be assigned to X, for example, as well as to Y, R, ZR, and so forth. This allows for very fluid control during battle and the ability to chain attacks while waiting on the refresh timers when a pin is used up. While X and Y inputs tend to be more melee or bullet-oriented, the other buttons tend to have beam effects, or even elemental area of effect abilities, causing damage to multiple enemies at once. While there are healing pins, I found that I didn’t usually need them, especially because you can tune the difficulty of battle as you go. If an enemy type gives you too much trouble early on, you can slide the difficulty down until you learn how to defeat it better, then ramp back up when you’re ready to take it on at even harder levels. 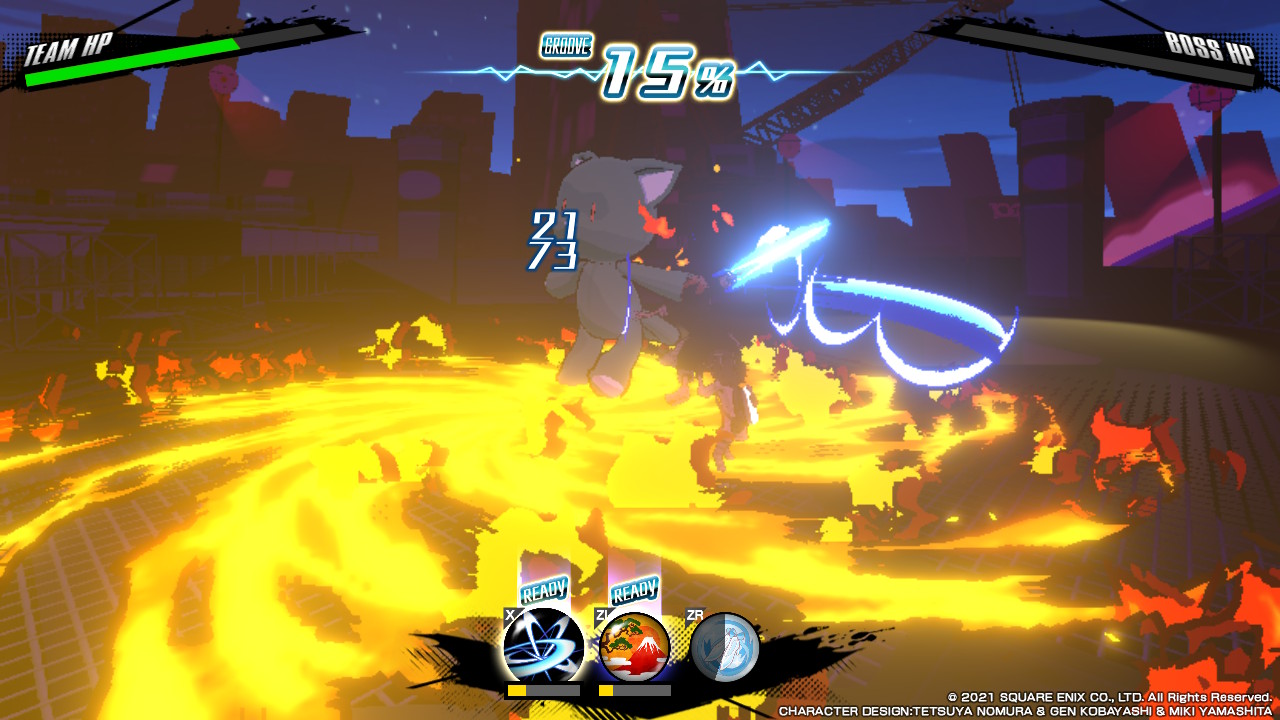 Pins drop after battle, and collecting them is a huge part of the overall experience in the game. Equipping pins will allow them to grow stronger after combat, some evolve, and others cap out at a stronger level. Excess pins can be sold at shops for cash, allowing you to buy clothing and food for the party. Clothing acts as equipment for your team, enhancing stats and giving passive abilities when in combat. These abilities can only be triggered if your Style stat is at or above the required threshold for the gear, but you can still equip a piece for stats even if you can’t use the ability yet. Abilities on gear can give a variety of boons in battle, from passive HP regeneration to extra attack strength for certain pin inputs. Making sure to raise the Style stat is a very important part of team management, more Style will give you access to stronger abilities, which will help you clear fights quicker with less HP loss overall.

Raising Style and other stats can be done by eating food at restaurants throughout Shibuya. The stats gained from eating are permanent, and a gauge in the upper right of the screen shows the party’s hunger level, allowing you to continuously manage food sources for the group to gain stats over time. The gauge depletes after each fight, so keeping an eye on it is helpful when you want to pad stats early on. Food can also give extra stats if a character enjoys the meal – so be on the lookout for which foods are favorites to take advantage of the extra gains. After eating or shopping at a store a few times, you may also get bonuses like extra items being available in shops, or new meals being on offer. Most of these additions are attained from the Friendship Points system, where the player can solve problems for various NPC’s in exchange for points that can be used to unlock items, new foods at shops, and even abilities in the overworld.

The World Ends With You has always been a game that culminates many systems into one package, and while the sheer volume of things to collect and do can seem daunting to some, the sheer joy of evolving pins, collecting new gear, and helping the characters out in Shibuya is well worth the effort. While the game’s loading screens may not exactly be snappy and fast, they don’t detract from the experience at all. Playing the game in both handheld and docked modes is comfortable and the colorful characters and monsters look wonderful on the small and large screens. While the first game’s port to Switch suffered from issues with the controls, here we don’t really see much issue. The new flow of battle is fantastically fluid and fast, with character switching being a simple affair that feels like second nature to anyone familiar with action RPG’s.

NEO: The World Ends With You does just as great a job at wowing me as the first game did all those years ago. The character development of Rindo and co. definitely fits the bill for being a proper follow-up, and the game’s various references to other Square Enix titles and pop culture are on point, as always. Whether this is your first fight for the Underground, or if you’re coming back from the DS days, this new experience is one that shouldn’t be missed. For the returning players, you’ll get to see how your old beloved characters have grown, and for the new folks, you’ll get to meet new faces that make you reflect on yourself and the world around you – and maybe, just maybe, you’ll expand your world a little.