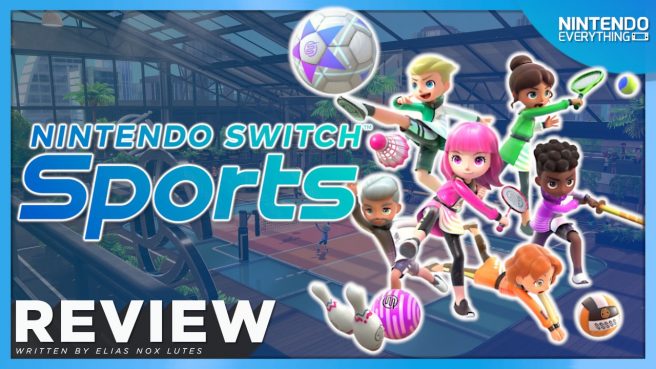 If, like me, you grew up when the Wii was current, you no doubt put some time in on Wii Sports. Packed in with each new console here in the west, the title was a lot of players’ first introduction to the console’s motion controls, as well as their first time being able to engage with family members who wouldn’t usually think of playing video games. Wii Sports itself became a system-seller and its popularity is still raging to this day, with many homes still dusting off their Wii for play sessions at family gatherings to entertain kids and adults alike. Now with Switch’s success, a new entry in the series has arrived – but will it reach the acclaim of its predecessors?

With surges of more covid variants circulating around every few weeks and where going out in public may give some of us anxiety, Switch Sports brings the feeling of a night out bowling or playing tennis with your friend on a Saturday afternoon right to your respective living rooms. The ease of being able to jump into a match on a whim is fantastic, and the workout gotten from more intense games like badminton can’t be downplayed. Sure, we could sit on our couches and use minimalist movements to flick the Joy-Con in the direction we want to drive our ball or shuttlecock, or what-have-you, but some of the real magic is callback to its past – the games just feel more natural and enjoyable when you treat them like the real thing and really engage the motion controls. Moving my body along with the game feels wonderful and has made me more active than I’ve been in months. I have the arm pain to prove it.

Making sure that you have enough room to freely move around is key for getting the most out of a session. Sitting in my office playing, there were no few times that I banged my index finger into the edge of the desk: the sharp and stinging pain can still be felt from this morning’s rounds of tennis. Each time, I will sigh, chastise myself, then stand up and give myself the adequate space necessary for safely handling my Joy-Con without fear of causing further numbness to my digits. The wrist straps for the controllers are highly recommended, as games can cause you to break out into a sweat and the grip on the controller becomes harder to handle. Definitely use the strap, for the safety of not only your controller, but also your screen. While its been a long time since we’ve heard about the smashing of televisions due to Wii motion controls, its not at all impossible to recreate some of those more unfortunate times with the Switch Joy-Con – it can, and will fly out of your hand if you’re not careful. I’ve chucked mine once, and haven’t stopped using the strap since. Lesson learned. 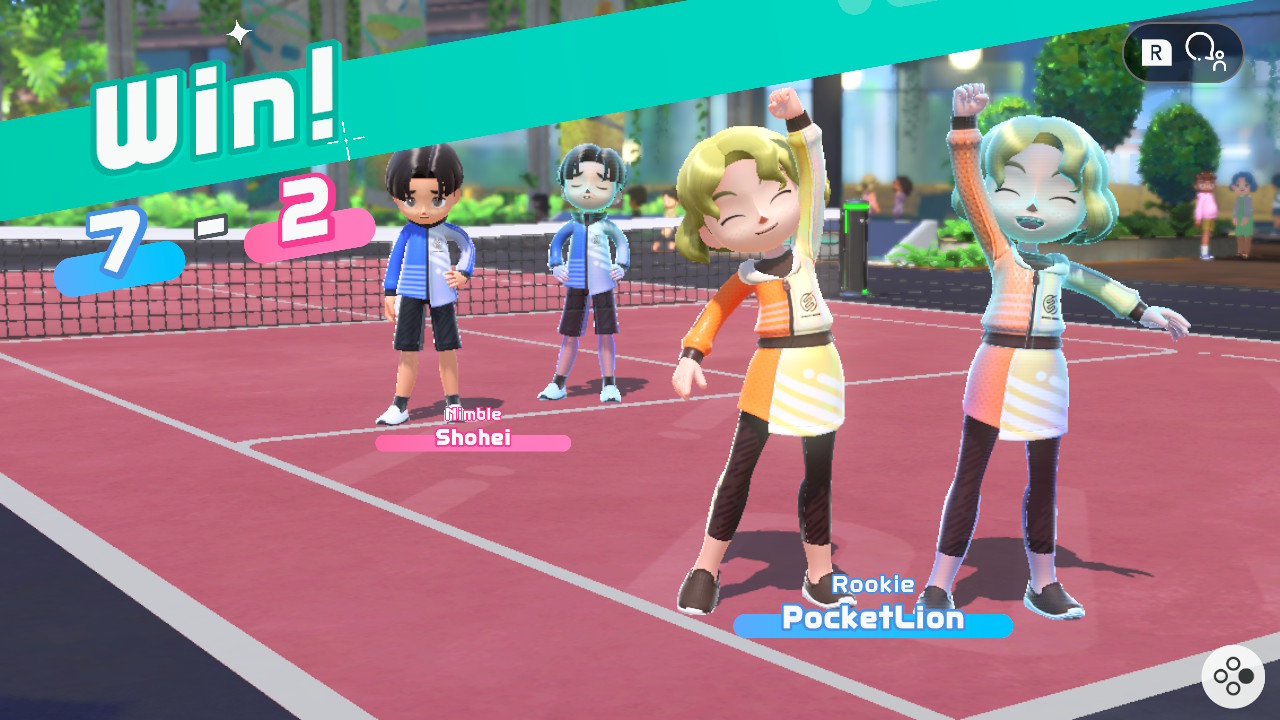 With six games packed in (soccer, volleyball, bowling, tennis, badminton, and chambara) there is not as much variety as seen in Wii Sports Resort, but what we do have is a small suite of games that are designed to take advantage of the Joy-Con and really get players moving. The first game I sunk time into was tennis, my old personal favorite from the Wii days. Utilizing two players per side, you can control a character close to the net and one further out. This is a pretty interesting formula that minimizes match times and streamlines games into short and sweet sessions – badminton, on the other hand? Much more intense, and likely my favorite offering in the collection. Bowling is, of course, incredibly enjoyable and I found myself walking up to my TV again just like the old days spent with my family on the Wii. The immersion of treating it like a real sport isn’t broken, and bowling itself is absolutely enjoyable no matter which play mode you choose. The addition of obstacles on the lane is a fun change, and keeps things interesting.

Where things do take a downturn are with soccer and volleyball, the two hardest games in the pack. Volleyball is absolutely grueling and feels stiff in comparison to other games, but with practice you can master some of the finer points of the motion controls and absolutely destroy opponents. Thing is, that sometimes you can get a movement almost perfect and the game still doesn’t seem to catch, or you miss a crucial spike and well, there goes the match. The spike, worth some of the most points, is just difficult to master. Soccer, on the other hand is something I found myself failing at so much that I went out and bought the leg strap just to see if it helped, and well it does… a little. In larger games with 8 players, things do get a bit chaotic and its almost overwhelming with the amount of travel and kicking you have to do to really make a difference on your team, but even though this game is my least favorite, its also the one that gets my heart rate up the highest with its full utilization of movement.

Chambara is not nearly as blood-pumping, but it does take a bit of precision work and focus that the other games don’t really require. Players can either go with a single sword, or dual swords. These options make for a different experience and you’ll need to adapt to not only your own weapon type, but what your opponent has chosen as well. While you can definitely wildly slash about and still have incredible amounts of fun, I felt way more successful in planning and timing each of my strikes. Chambara may actually be one of the best parts about Switch Sports, as much as my love of badminton is taking the top slot for me, this is definitely my second most-played sport. Particularly, it has made me very aware of how much the Nintendo Switch has to offer in terms of fitness games on Switch and has reignited my hunt for the elusive Ring Fit Adventure to round out my collection of Fitness titles. 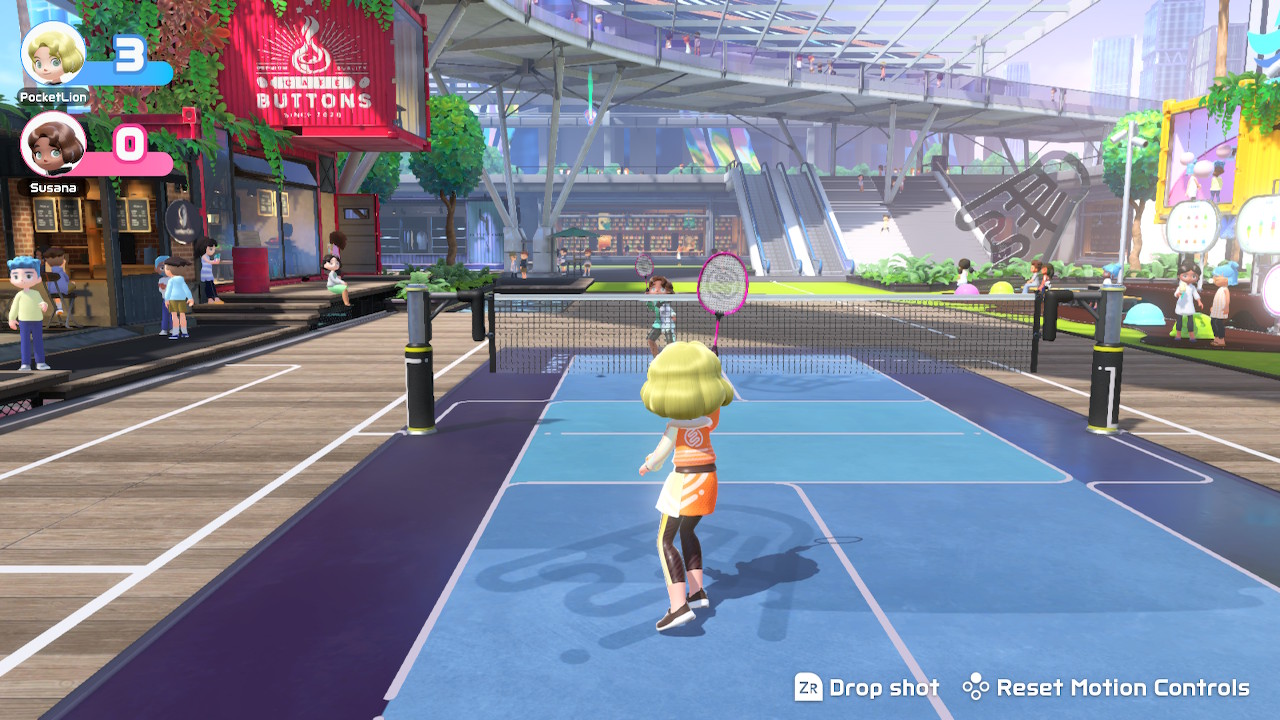 An addition to Nintendo’s Sports formula is the new avatar customization system. During your matches online, you’ll earn points for every game you play regardless of whether you win or lose. As you continue to play, stacking up points becomes fun and addictive. For everyone 100 points earned, you’ll unlock a new piece of customization gear for your player Avatar, allowing you to deck yourself out in sharp outfits with accessories. You can also change out the equipment you use in each game, an aesthetic decision that I’m happy they included. While standard rackets, bowling balls, and other game equipment would have been just fine, the addition of color variants and designs really does add to the grind, but I never felt like collecting new things was a chore or something I had to actively work for.

Online matches are fast enough that getting in a few rounds easily nets enough points to unlock a new customization piece. Building up a collection of cool gear isn’t hard at all, and with new pieces and themes being added there’s always a reason to load up the game and check for new things. Completing a Collection can net some cool bonuses, too. While I may not strive to collect every single piece on purpose, I’ll probably end up doing so without realizing it over time, and that feels kind of rad when you’re used to grinding for hours in games like Dragon Quest III for a 1/256 chance at a cute Cat Suit that changes your character’s overworld sprite into a cute kitty.

With the addition of golf in the plans and the sheer fun and nostalgia of local multiplayer, Nintendo Switch Sports shapes up to be a solid party game that is sure to become a family favorite like Wii Sports before it. While one can’t help but look for the same in a follow-up game like this, I think that what is new is what shines the most here. We may not have a copy of this game in every living room across the world, but what we will have is a fun time burning some calories and farming points to up your character avatar’s drip score, as the kids say. I’ll be collecting avatar pieces for weeks, and hopefully I’ll shed some pounds, too, and look rad while doing it.

Nintendo Switch Sports copy provided by the publisher for the purposes of this review.