Posted on September 3, 2022 by Nicholas Serpa in Reviews, Switch 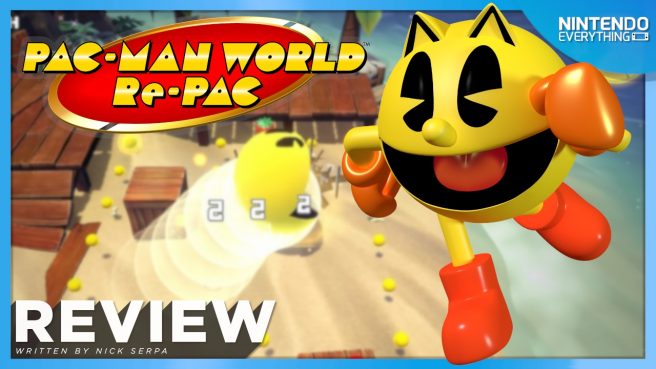 It’s not a stretch to say that almost everyone who plays video games is at least aware of Pac-Man; the puck-shaped pellet muncher is perhaps one of the most iconic gaming protagonists of all time. So, while it shouldn’t be a surprise that of course he featured in his own series of 3D platformers in the late 90’s and early 2000s – those games were a dime a dozen back then – it was a bit of a left-field announcement when Bandai Namco revealed that the original Pac-Man World would be getting a remake. It’s a solid 3D adventure that has its fans, sure, but it didn’t leave a substantial impact on the genre in the same way that Mario, Crash and Spyro did. Sometimes, though, a game doesn’t need to innovate to be a good time, and Pac-Man World Re-Pac is a perfect example of how tight, responsive platforming and a dollop of arcade-fueled nostalgia can be a timeless, satisfying combination.

Of course, it wouldn’t be a Pac-Man game without those pesky ghosts – and in World, not only do they capture Pac-Man’s family (on his birthday too, those jerks,) but they also whisk them away to the oh-so creatively-named Ghost Island where – believe it or not – the ghosts are holding them all hostage! So of course, this is Pac-Man’s impetus to put on his game face and traverse through the various regions of the island, rescuing the various members of the Pac-Family as he goes (the most important one obviously being Pac-Pup, which, yes, is the canonical dog in the Pac-Man universe.) There’s also a new villain behind the whole scheme named Toc-Man, who is genuinely unsettling for me to look at for an extended period of time.

Pac-Man himself has had quite the glow-up in Pac-Man World Re-Pac compared to his sprite-based origins. Sure, he’s the same lovable gumball he always has been, but now he’s sprouted a full pair of arms and a set of legs, as well as a rather dashing pair of red kicks. Now, having transcended the second dimension, Pac-Man can run and jump freely through linear 3D environments, and even has a few new tricks up his sleeves. His Rev-Roll move allows him to charge up his speed and boost up steep ramps, but also acts as a means of attacking enemies and interacting with certain moving platforms. He also now has a Butt-Bounce attack that not only lets him crush certain enemies from above, but that also acts as a form of enhanced jumping that can make hard-to-reach platforms accessible.

This moveset opens the doors for a decent variety of traversal-related challenges, although there’s nothing here that will feel particularly challenging to most players. Importantly, though, Pac-Man feels absolutely wonderful to control in Pac-Man World Re-Pac. That’s to the credit of the developers of this remake, who not only gave the entire game a complete visual makeover, but also tightened up the physics driving the action. The result is an incredibly responsive movement system, one that’s brought to life eve further by some charming and detailed animations for Pac-Man himself. There’s a noticeable bounce in Pac-Man’s step every time he walks or leaps into the air, and I loved watching his facial expressions change as he flutter-jumped over a chasm or tried to balance on a moving platform. These little details were present in the original, but are much more appreciable now that they’ve been re-worked for HD.

Similar in some ways to Super Mario 3D Land, stages in Pac-Man World Re-Pac allow for full 3D movement without allowing the player to control the camera. This places the player’s focus solely on taking out enemies and landing jumps, which I appreciate, but the fixed perspective does occasionally make it difficult to gauge distance when moving towards or away from the camera, making it annoyingly easy to miss relatively simple jumps. This could have been remedied by changing the angle at which players view the action, as well as making Pac-Man’s shadow a bit more prominent as he descends to the ground after a leap. These are minor quibbles that many 3D platformers struggle with though, and ultimately, I was still having a great time even when I was falling to my doom. 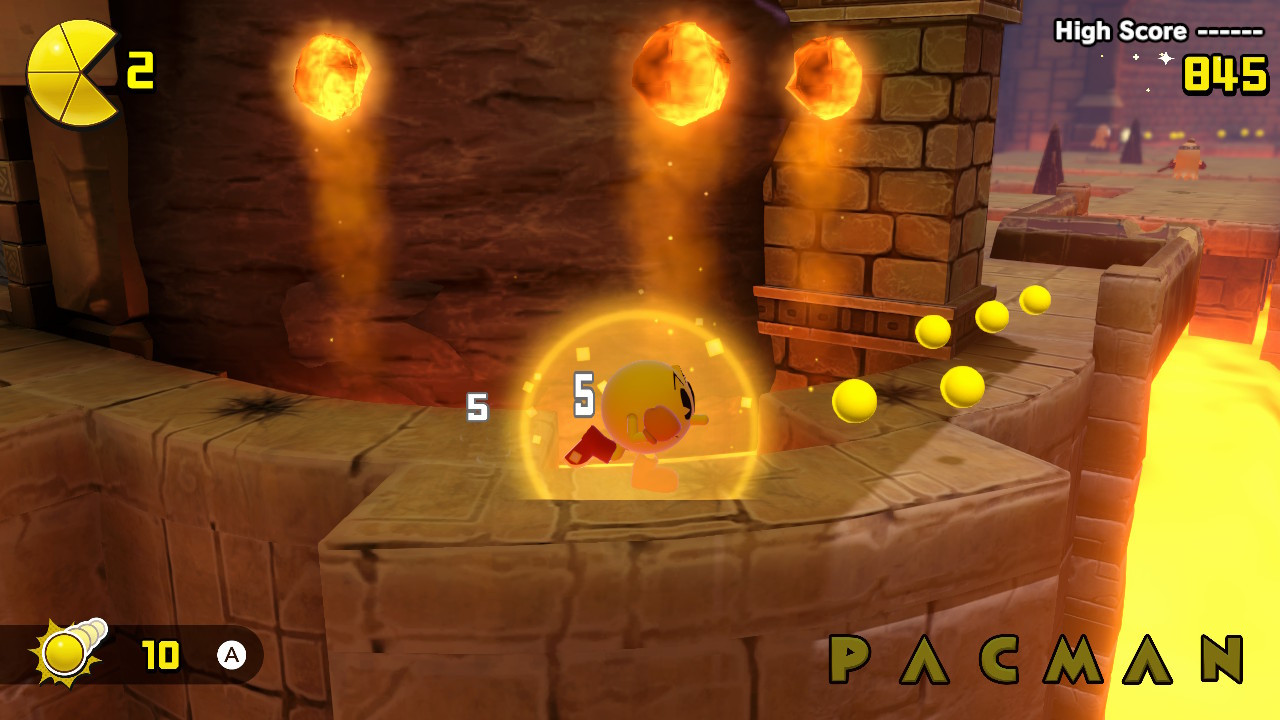 Pac-Man World Re-Pac may be vastly different from the original arcade game at a mechanical level, but fans of the original might be surprised at just how many elements from the classic Pac-Man games have been adapted into Pac-Man World. For example, while most enemies that players will encounter can be taken out with a well-placed Butt Bounce or a carefully aimed Rev Roll, there’s only one way to defeat those pesky ghosts, and that’s by finding a Power Pellet. Doing so not only makes Pac-Man temporarily invincible, but also makes him grow ridiculously large, allowing him to take out any ghosts that have been chasing him around. It’s immensely fun to tear through a level for 15-seconds or so as an all-consuming force of nature, and oftentimes the Power Pellets that allow for this only appear after discovering a hidden switch or treasure chest, so it makes exploration more rewarding too.

It’s worth noting that while stages in Pac-Man World Re-Pac are mostly as linear as they come (with a few exceptions), there are a ton of collectibles scattered around the stages, and good incentive to collect as many as possible. Pellets – you know, those little dots that Pac-Man always gobbles up in his classic games – actually have a practical use here, acting as a form of ammunition that Pac-Man can throw at enemies or objects from a short distance. Additionally, cherries, oranges and other fruits will earn Pac-Man extra points when collected; earning 10,000 points translates to an extra live awarded at the end of each level, so players who explore thoroughly can typically earn an extra 3-5 lives at the end of most stages. But perhaps the coolest collectibles, in my opinion, are these special keys that unlock bonus maze stages, as a sort of throwback to the original Pac-Man games. These little bonus stages are a great change in pace from the more traditional 3D platforming and ended up being some of my favorite parts of the game.

Pac-Man World Re-Pac spreads its 23 levels across six worlds, and although the world themes on display here are pretty much as simple as they come – you’ve got your island-themed-world, your space-themed world, your spooky-themed world, et cetera – the stages themselves remain fun to play through, even if most of them are short on surprises. There are some interesting ideas here and there – one boss battle is basically a level of Mario Kart, for example, and there’s a fun sequence of levels in a carnival-themed area that have some interesting moving obstacles – but for the most part, the stages are straightforward and predictable. That’s not necessarily a bad thing – I just don’t feel like, years down the road, I’ll be reminiscing about this game in the same way that I do with other 3D platformers of the era. 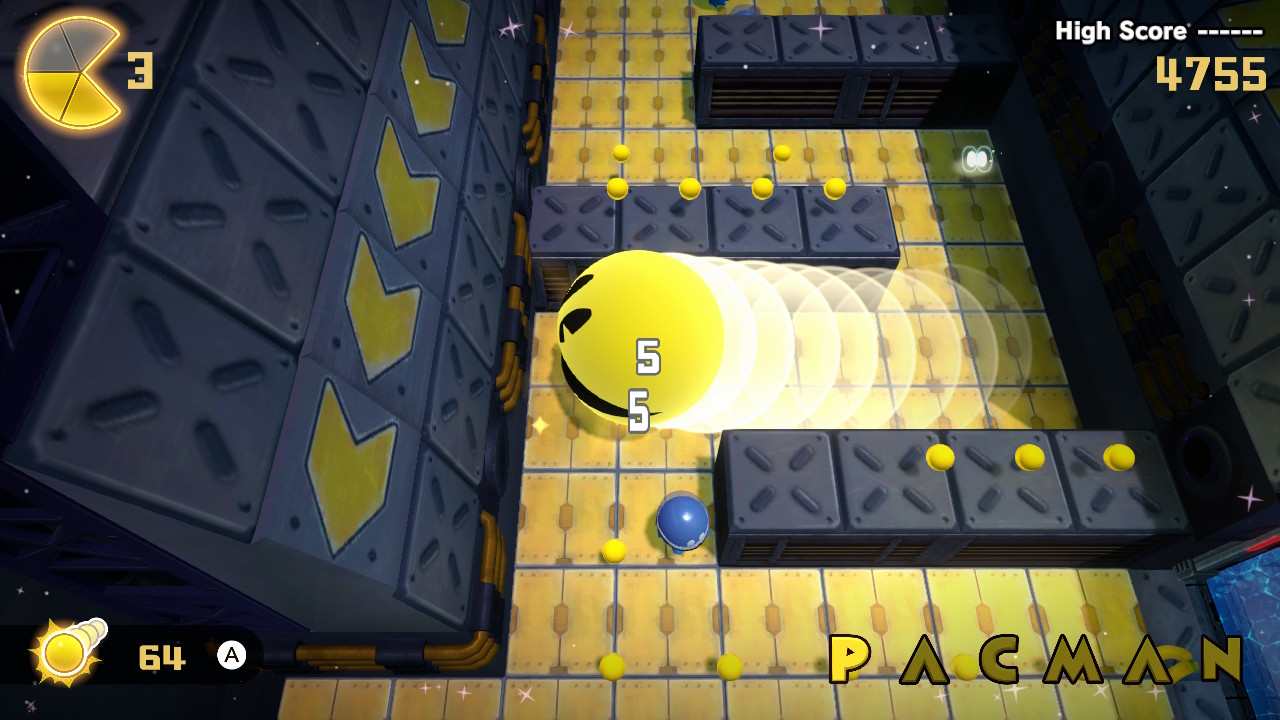 That said, I really want to emphasize that although Pac-Man World may not be quite up the overall creative standards of its peers, it’s by no means a bland or boring game. In fact, I was having fun from start to finish, and was caught off guard by just how much charm and personality is packed (ha) into this game. That’s especially true for all the Pac-Maniacs out there who, in particular, will be delighted by all the classic sound effects and remixed songs from older games. One oversight that I did notice was that while a good chunk of Pac-Man World’s songs has been remastered for this remake, nearly half of them are not, instead seemingly ripped straight from the original PlayStation disc without any additional care paid to them. I just don’t understand why developers make this choice. It’s really jarring to go from listening to a crisp, clean-sounding song to a crunchy, low-fidelity track in the next stage. I understand that the budget isn’t always available to get everything done, but it would have been better to just have kept the original audio across the board then to do this weird half-assed hybrid.

Beyond that, though, the Switch is a great place to play this remake. The game doesn’t quite hit a stable 30 frames per second in handheld mode, but it’s at least consistent enough that it doesn’t distract from the action. It also is just a very colorful, crisp game, and there has clearly been a ton of work put into these new character models and textures, with hardly a jagged edge in sight. Really, from a pure visuals standpoint, Pac-Man World Re-Pac sets the bar quite high for what a remake of a 3D platformer can and should look like, and it absolutely blows away the recent Klonoa remasters both in the scope of the work that was done, and in the quality of the ultimate package.

Pac-Man World Re-Pac isn’t a particularly innovative or groundbreaking 3D platformer, but it remains a beautifully crafted, polished, and deeply entertaining experience packed with personality. Pac-Man moves like butter in a 3D space, and the game cleverly translates some of his most iconic qualities into a completely different genre very effectively, rarely stumbling. Despite being released over two decades ago, the game looks and feels like a modern adventure at almost every level, making it easy to appreciate its satisfying traversal and charming aesthetics. Should Pac Man World’s sequels ever get similar remakes at this level of overall quality, I’d happily chow down on those, too.

Pac-Man World Re-Pac copy provided by the publisher for the purposes of this review.