Posted on January 22, 2023 by Elias in Reviews, Switch eShop 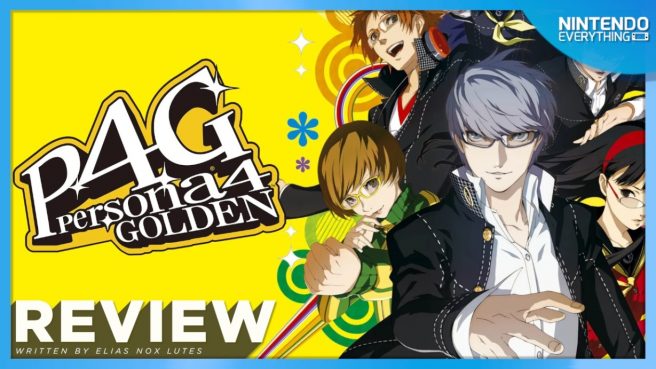 Releasing originally on the PlayStation 2 in 2008, Persona 4’s small town of Inaba is not unlike my own home town. A small, sleepy community with one grocery store, one gas station, and if you drive by it and blink, you might miss the town altogether. Small communities are generally safe, right? Moving there, one might feel secure leaving their doors unlocked, with no real worries about what could happen while you run to the convenience store. Inaba, though, has a murderer on the loose – one that seems to kill through very non-traditional means. First, a local TV personality, and next a teenage student… Is anyone safe anymore in Inaba? How does one catch a killer that leaves no trace of their crime? Why do the victims show up beforehand on the eerie Midnight Channel when it rains? Why are students being targeted in the first place? Persona 4 Golden’s murder mystery has many layers, and by taking control of our Protagonist and his friends can we really solve this situation and save the lives of those targeted?

Inaba is a modern setting, with a beloved local diner, part time jobs, a school life, and time to hangout with your friends and make new ones. Our protagonist moves in with his uncle and cousin while his parents are overseas for work. What starts as a cozy life filled with studying for tests, attending after-school clubs, and working part time for pocket money soon though becomes a modern fantasy nightmare. If you’ve played a Persona game before, you’ll be used to the grind of living your school life and balancing dungeon time between midterms and school club activities. The balance is important, as Igor tells you early on in the Velvet Room – your bonds, or Social Links, being an aspect of life that should not be ignored. That said, raising your Social Links does net the player significant gains in power for fusing and creating new Personas, but also gives an edge to your party members the higher their Social Link is leveled. Making and maintaining friendships is very important, but there is very little precious time. Be careful in your choices, because studying and improving the self is just as crucial. Balance in all things. 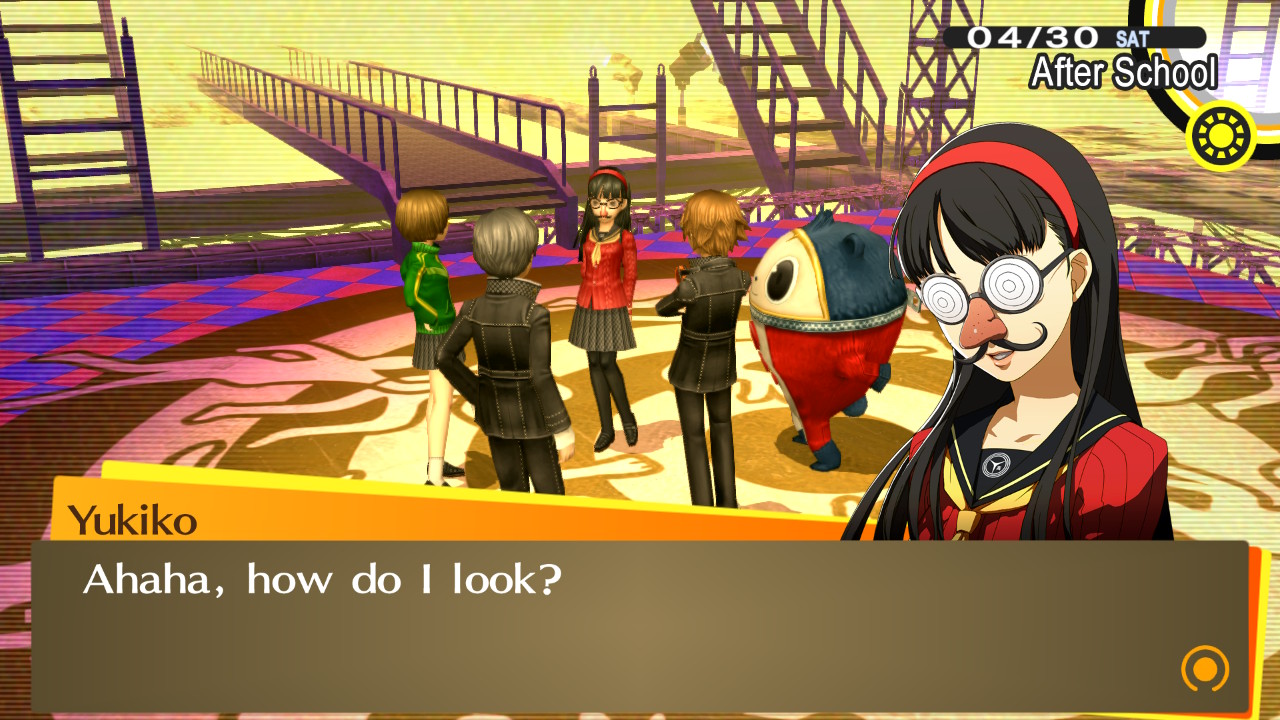 For newcomers, Persona games unravel their stories not unlike a visual novel, with large amounts of dialogue between characters to progress the main story. While you can skip through scenes with a press of a button, be careful, because you could miss crucial details, like where to head next or where to check for clues to move forward. Combat is turn-based with each character capable of using elemental magic and melee-focused attacks along with buffs and debuffs for your team and the the enemy respectively. Taking advantages of weaknesses and being mindful of resistances will serve you well, because Persona games do not play about their dungeons being a bit of a challenge. To begin a fight, the player must come into contact with a shadow, and how you come into contact matters. If the shadow gets you from behind, they’ll start with advantage, but if you hit them from behind, the upper hand is yours.

The “1 More” system is unique to Persona and Shin Megami Tensei games – if you strike a weakness, your character will get to take an additional action, but the same applies to the enemy as well. Knocking down an enemy on screen will allow the player to use an “All Out Attack” where the entire party will rush in to beat the stuffing out of downed enemies, dealing massive damage in the process, and at times ending the battle completely. After a fight, if you’re lucky, you may encounter Shuffle Time, a mini game that allows you to choose from the displayed tarot cards on screen, including some of the following: Skill Cards, Personas, Persona Stat Increases, Persona Level Up, Persona Skill Level Up, and Treasure Chest Keys. 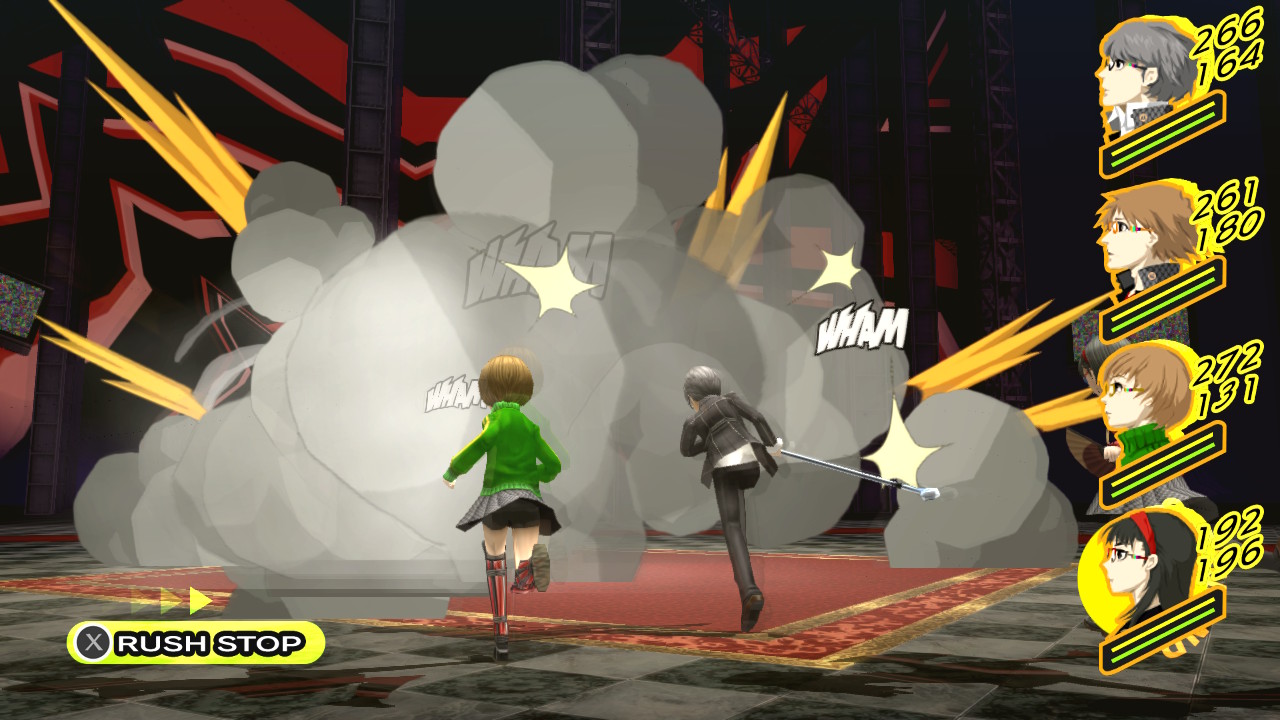 Persona 4 Golden’s aesthetic is fully modern, not at all unlike the time period it was originally released in. Back in 2008, flip phones were common and you’d still see CRT televisions here and there from homes that hadn’t upgraded to their flatter HD successors just yet. Immersing yourself in the game feels like living a life you may have lived fifteen or so years ago. While those who have come in from Persona 5 may be used to a darker art style, this title’s approach is colorful and almost light-hearted in some ways. The music is upbeat and positive in every area and the battle themes are also, as the kids say, “poppin’.”

Art assets here are also a bit different than one might be used to in previous games. From older titles, one will notice way more use of color and lighting, and even the shadows have full-color portraits to make them visually pop. Shigenori Soejima, previously known for work on sprite designs, item designs, and quality control, first began working as art director and character designer for Persona 3. His work would continue here in Persona 4 and he would even go on to lead the design for Persona 5 and all the spin-off titles in between them. The improvement in the series’ most important assets really shines though in Persona 4 Golden’s port. Despite upscaling for PS2-era models, the game still looks (and runs) beautifully on Switch. Portraits are absolutely gorgeous, and the use of anime cutscenes throughout the narrative feels natural. The game itself feels like playing through an anime, after all. New features for this enhanced port include a much-needed Quick Save, and the new Album feature. While Quick Save can be accessed at any point, the Album is available in the player’s room, allowing you to explore previous events with any established Social Links in your playthrough. The Album can also be used to replay a selected Rank event and alter the protagonist’s responses to characters in order to see different outcomes. This is useful for if you plan to New Game+ and have messed up a few times in your responses. While its not necessary to min/max every single conversation, its helpful to look back and see what could have been.

If you played the base Persona 4 on PS2 around its original release but missed out on the update for PS Vita, Golden is full of small enhancements, like the ability to go out more at night, and later on explore even more areas. There are also a couple new Social Links, one being the addition of the mysterious Marie from the Velvet Room. Marie’s Social Link impacts the Aeon Arcana, and her most useful aspect is handling skill cards – if you give her one that you’ve picked up, she can clone them, making more copies available for use as you progress. This becomes very useful in late game when you have access to building and fusing very strong Personas, so definitely be sure to make use of her unique ability. 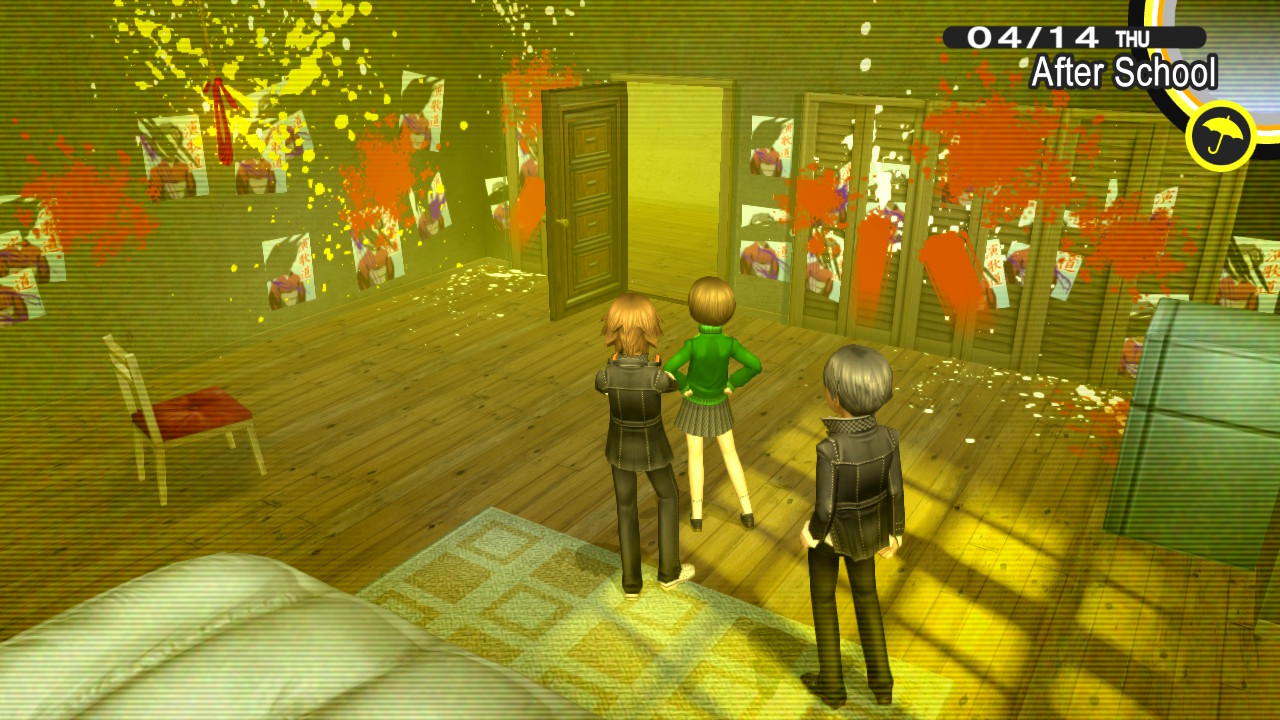 Persona 4 Golden’s mystery probably shouldn’t be in the hands of literal children. You’ll be faced with lots of death, adult themes, and more. While this can be off-putting to some, the sheer amount of drive that these kids have to do the right thing and expose the culprit is absolutely admirable. There are fewer objectives to chase in Persona 4 Golden than its successor, which makes this game feel like a perfect blend of life sim and dungeon crawler. Going out after school and finding your friends in their usual haunts feels like what it was to be a kid in the 2000s – which for many of us can bring back a nostalgia that we’ll never be able to emulate again in a world of smartphones and social media.

While there are a lot of changes for the better in Persona 5 Royal, Persona 4 Golden doesn’t feel archaic at all in its presentation or execution, which is very telling in the amount of effort and love poured into the project. Running flawlessly on Switch in both handheld and docked modes, there’s never been a better time to give this one a spin. With a wonderful narrative full of twists and turns, do not deprive yourself of this story. As you burrow deeper and deeper into the rabbit hole, you’ll find that the stakes continue to get higher, and that only you can bring the true villain to justice for their immeasurable crimes. Do your best to gather the strength of your friends, and above all, be careful on your journey.

Over a decade has gone by since Persona 4 originally released, and my first run was alongside my now spouse, where we played the game together from across the country, using Skype as a means to communicate while we were far apart. Now, side by side with Switch in hand, we have another opportunity to take on the challenges of Persona 4 Golden (and its banger of a soundtrack) anew. Persona 4 has a charm that is fully its own – sure, new games from the Shin Megami Tensei universe will come and go, but I think Persona 4 Golden will forever stand on its own as proof that a JRPG in a modern setting can be an absolute treasure, and sometimes even a breath of fresh air.

Persona 4 Golden copy provided by the publisher for the purposes of this review.