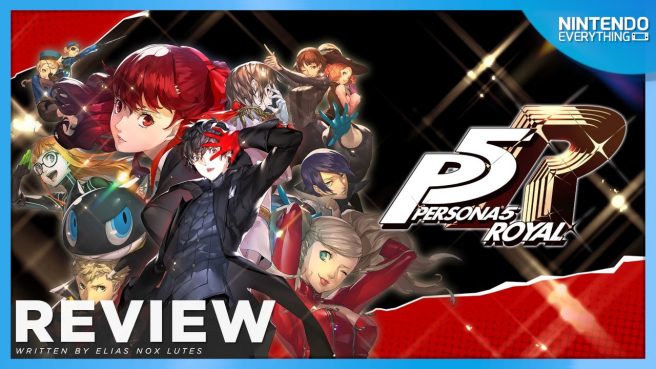 2022 has been a year heavily laden with JRPGs for Switch, but while most of the releases we’ve seen this year are all new offerings, Persona 5 Royal is a bit late to the party with the original Persona 5 launching back in 2016 for PS3/PS4 and Royal following in 2019 specifically for PS4. While a Switch port was widely hoped for, the first taste Switch owners would get of anything related to Shin Megami Tensei would be the port of the Wii U’s Tokyo Mirage Sessions #FE. Although the mainline series did make its way over soon enough, this is the first round of Persona on Nintendo’s hybrid console. After all these years, though, is it really worth the wait and the port-begging?

Flashing lights and dancing shadows cross your vision – it seems we’re on a mission, and we need to be on the move. Jumping across ceiling beams and chandeliers, we make our way to our first fight. We are Joker (perhaps you might recognize him from Smash Bros. Ultimate,) a high school teen-turned-vigilante, and we are out for sweet, sweet justice.

Joker’s story is unfolding from a much further in the timeline, but quickly we’ll be thrust into an earlier point so we that can properly understand why the youth are donning thief outfits and stealing away into the night. Turns out, Joker has a tendency to try to do the right thing despite a variance in power dynamic. This has lead to terrible things and a bit of a pickle for him, overall, but like him I’d still do the exact same thing in his circumstances. Sometimes the right thing is not easy, and you end up punished regardless, and so enters Joker into the path of “rehabilitation.” 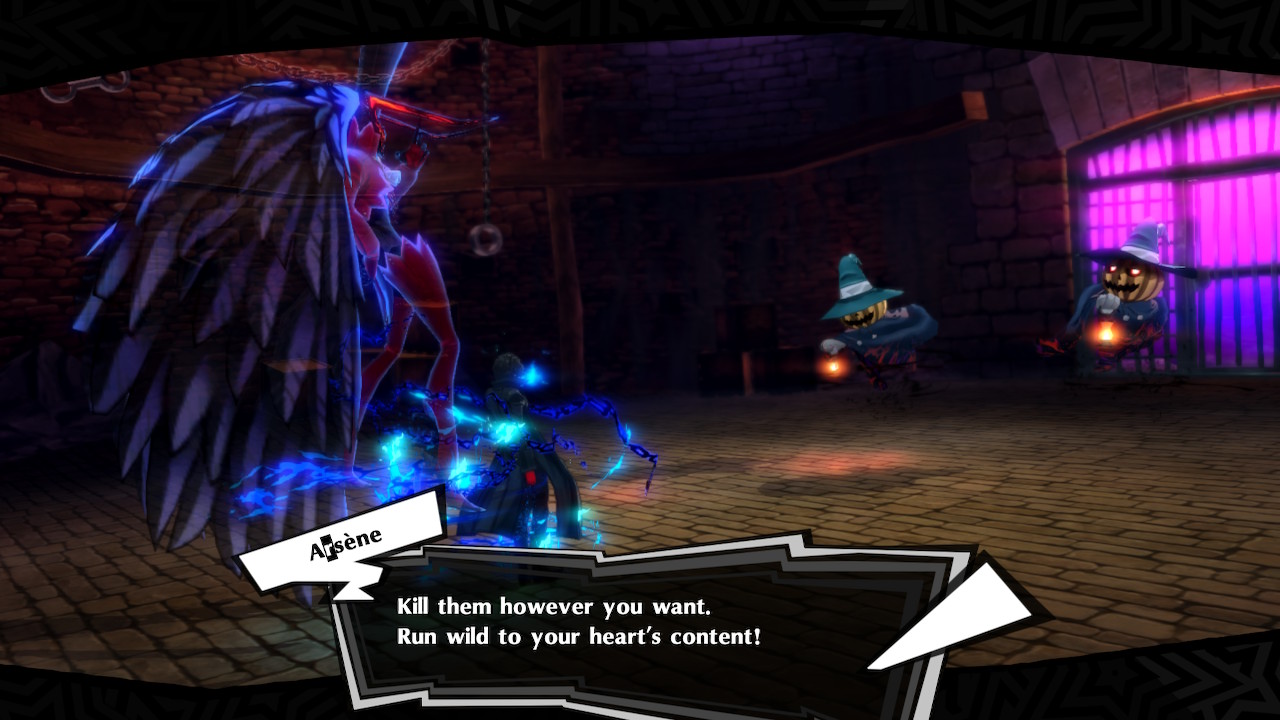 This all started soon after Joker moved schools and was put on probation after “the incident” and for the purposes of story, we will leave it at that. Trying to live on the straight and narrow, he’s taken in by a coffee shop owner to go to his new school with the promise of keeping his head down and staying out of trouble. As honorable an intention as there ever was, of course a wrench must needs be thrown into the gears of Joker’s plan to completely get his life back, and that wrench comes in the form of a weird little app icon that he just can’t seem to delete from his phone, because you see… weird things have happened since it appeared, and deleting it doesn’t seem to work. It just comes right back. It also seems to have a GPS feature? Strange, but we have to focus on getting ourselves off to our first day at our new school. We did say we’d be a good kid.

We meet with another student on the way and decide to walk together, see a weird encounter with a teacher, and attempt to meander our way to school. Just our luck, we end up lost, taking the poor soul that took the chance to talk to us along for the ride. Strangely, the school should be here, but instead there is a medieval-style castle and that’s quite out of place in the middle of a bustling Tokyo. Are we even in Tokyo anymore? Not quite. We’re in a place called the Metaverse, which is where all of the game’s dungeons and fighting opportunities will be. Luckily, we seem to have the power to fight, and with the power of our Personas at our sides, perhaps we can change Tokyo for the better, or at least change a few of the slimiest hearts that call it home, and it is because of those hearts that shadows are born.

Navigating the Metaverse is mainly done through the finding of keywords, which will happen as the story progresses. New dungeons will open up, new characters will be introduced, and your party will grow in size and strength.  An additional side dungeon will open up eventually, with its own set of missions and story. Managing trips to the Metaverse starts out a little daunting, even for some veteran players of RPG titles. HP and SP are both used for abilities, healing items are a little tricky to come by if you don’t grind for a little cash, and using healing skills depletes SP over time. You can replenish SP with items, but in the early game this is a bit difficult to accomplish. Sometimes, in Shin Megami Tensei titles, one must pace themselves. Persona is no different, but thankfully difficulty settings do exist if you find yourself having a rough time. Remember that dungeon crawling is important, but there are a lot more facets to this journey than just putting an end to monsters both figurative and literal. 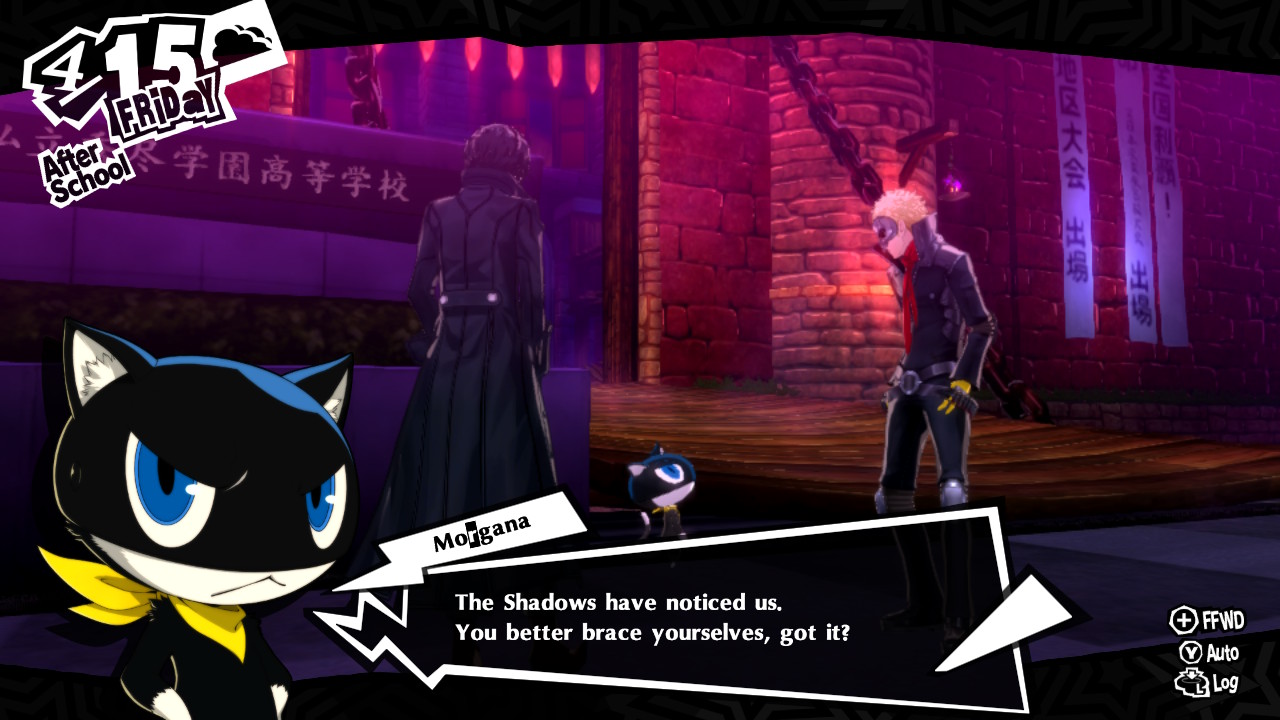 Persona games focus a lot on story-driven content, and a lot of that story is delivered in the real world across school and home settings. Players will be able to explore parts of Tokyo, hang out with their friends, and even experience a bit of what the city has to offer in terms of food and entertainment. One of the things that is most important in Persona games is the forming of bonds between the player and the other characters. These bonds tote incredibly strong perks: the more time you spend with a character and invest in your relationships, the stronger your bonds become. There is a level up system for these bonds called a “Social Link” and each level gives a different boon, like more perks in combat with a party member, or access to medicines at discount prices. The amount of characters in the game is rather extensive, too, so make sure to choose what to do wisely. You’ll need to invest in your own development as well, so be mindful about how you spend your time.

The player has a very unique ability in that he isn’t locked to just one Persona. While your party members will awaken a Persona that reflects their inner selves, Joker has the ability to form pacts with shadows and manifest them as Personas. Bonding with different shadows will allow Joker to use different abilities and swap between them to take advantage of elemental weaknesses and more while fighting. Additionally, collected Personas can be fused and combined to form new ones with different abilities. While they can carry over some abilities from the original fusion material, the monsters made with fusion are generally stronger with more powerful moves. Taking different ones into battle and settling on a team that feels right for you can take some time, so feel free to experiment when going into the Metaverse.

Persona 5 Royal is subject to most JRPG staples: equipment, leveling up, learning skills, and using and managing items for battle. The port over to Switch is rather smooth. Handheld mode does have noticeable pixilation on character models, but portraits for speech are beautiful and make the background matter a lot less. The loading times are average, and frames don’t seem to drop or stutter, even with a lot of models on screen. The game’s animated cut scenes look wonderful in both handheld and docked mode, and docked mode on an HDTV is quite crisp. While some loading times were a little long for dungeons, there was nothing that made the game feel clunky or cumbersome, in fact, it was honestly a very fluid experience that was on par with my memory of my PS4 playthrough. 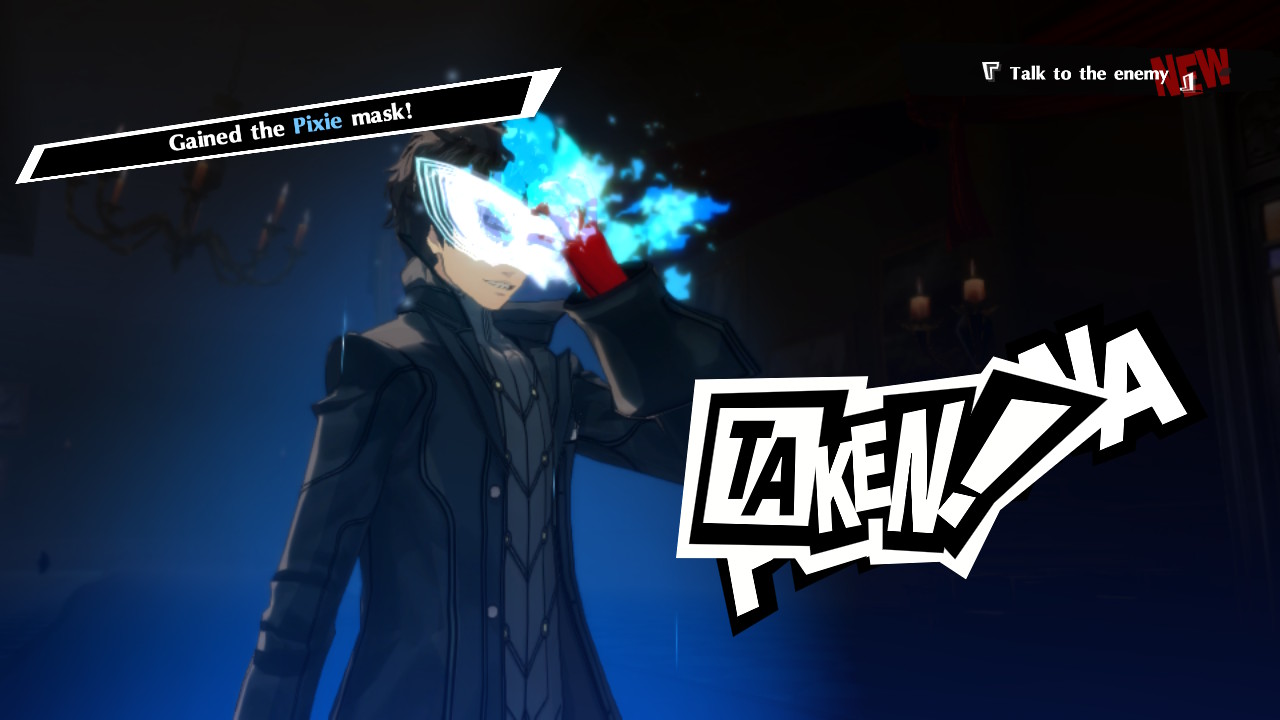 From an art direction standpoint, this is mastery level. The game’s theme is centered around the phantom thieves, and encompasses it beautifully. It is in the music, though, that you can find the brightest star in Persona 5 Royal’s sky. Each track has a jazz influence and female vocal lead, and the soundtrack never fails to produce catchy tunes that feel right at home in adding ambience to your adventure. From banging fight tracks to somber background for when the story takes another twist or turn, playing through the game feels a lot like playing through a very immersive animated movie, with a side of tactical combat.

Combat is quite quick in most cases, as long as you learn and take advantage of the battle system. Elements and weaknesses can play a huge role in a fight. Dealing damage with a weakness or critical hit will knock down an enemy and allow the attacker to take another turn. These can be chained one after the other when possible to knock down an entire team, which will prompt you to either use another turn or opt for a Team Attack that will deal massive damage. These attacks can take out an entire group of mobs if you play your cards right, and staggering and teaming up against large enemies is a valid strategy to push yourself as far through each dungeon as possible. Remember that dungeons can be visited for multiple days, so there’s no real reason to try and complete one in one single trip. In fact, some dungeons won’t let you try to clear them in a single clip due to story and progression.

So what does all this sum up to? An incredible time, for one. Persona 5 Royal may be a little late to the party, but if you haven’t stormed the castle in a while or if you’re looking for your next turn-based JRPG, you would be hard-pressed to find a more worthy pickup. Boss fights are a challenge, there’s plenty of content to explore, and if you’ve never waded into the JRPG pool before, there’s no better title to dip your toes in.

Persona 5 Royal is the current pinnacle of modern turn-based RPGs. While you may have buried yourself in mountains of Final Fantasy titles and Dragon Quest adventures, none have the storytelling elements or the visual and musical appeal of Persona 5 Royal. We’ve cast Firaga at tons of Behemoths, and we’ve Zoomed ourselves across worlds to search pots for mini medals, but now is the time to use a Goho-M and start playing this game – consider it your homework. Should you double-dip if you’ve played before? Definitely if you only played the original Persona 5 and skipped Royal. Is it worth it to pick it up on handheld and go for the trifecta? If you like the game, absolutely.

Persona 5 Royal copy provided by the publisher for the purposes of this review.