Posted on December 4, 2021 by Elias in Reviews, Switch 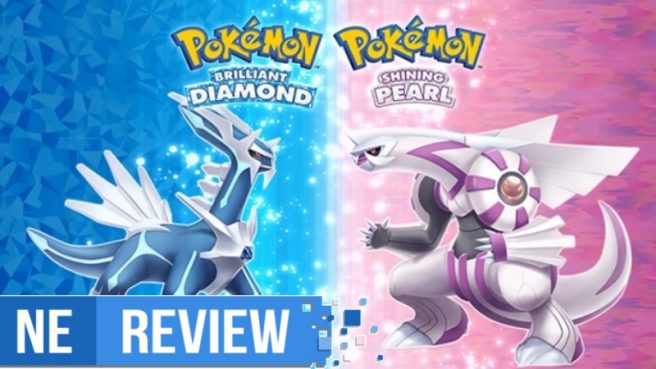 Pokemon Diamond and Pearl originally came to us here in the west back in 2007. I was a senior in high school when I first got my copy and ended up stopping my clock in game at 999 hours. To put it lightly, I was hooked. The series’ first entry on the DS gave us a lush new region to explore with interesting additions like the Poketch and the ability to select moves in battle that utilized the system’s touchscreen. Along with being able to bring over Pokemon from the previous generation of games, a more complete Pokedex was possible, and it was easier to attain before. Nostalgia aside, it’s now 2021 and we have the remakes in hand with Pokemon Brilliant Diamond and Pokemon Shining Pearl on Switch. Do the Sinnoh games live up to the hype, or should we have left this one… underground?

Right away, players will notice that the art style mimics that of the top-down perspective of older games. In an effort to stay true-to-form, the overworld is a colorful and simple rendition of the games we remember. The world itself seems to be recreated almost tile-perfect – NPCs and items are right where I remembered them to be, and finding and catching Pokemon is also as expected. With this game being in the hands of a new developer in ILCA, I wasn’t at first quite sure what to expect. While past remakes did allow for the catching of new and updated monsters, Brilliant Diamond and Shining Pearl went the route of truly sticking to the originals with the Gen IV Pokedex being preserved entirely. While some of us might be a bit miffed about being unable to bring some of our new friends along for the journey, I was actually okay and quite happy with picking up old favorites and being able to adventure with them again. That’s one of the things that really sets this remake apart from the rest: it really is a faithful remake, and doesn’t add any huge new bells or whistles to the old formula. While Mega Evolutions and other changes have been seen in remakes past, Brilliant Diamond and Shining Pearl stick to the basics.

Our original story is back again: A kid and their friend stumble into the tall grass and need the help of a close by (and conveniently forgotten) Pokemon in order to fend off a wild attacker. This sets the course for a massive adventure across the region. Borrowing a Professor’s Pokémon definitely set us up for a lot of work. We have a huge region to explore, and as always, a new Pokedex to fill up. Setting out, your friend from your hometown and the Professor’s young assistant are on journeys of their own, and bumping into them from time to time shows their progress and gives the player a chance to test their skills against their friends in battle. Double battles do make a return, as do NPC partners in certain areas, adding a teammate to the fray when taking on two trainers, and allowing for two wild Pokémon to appear in a single battle. 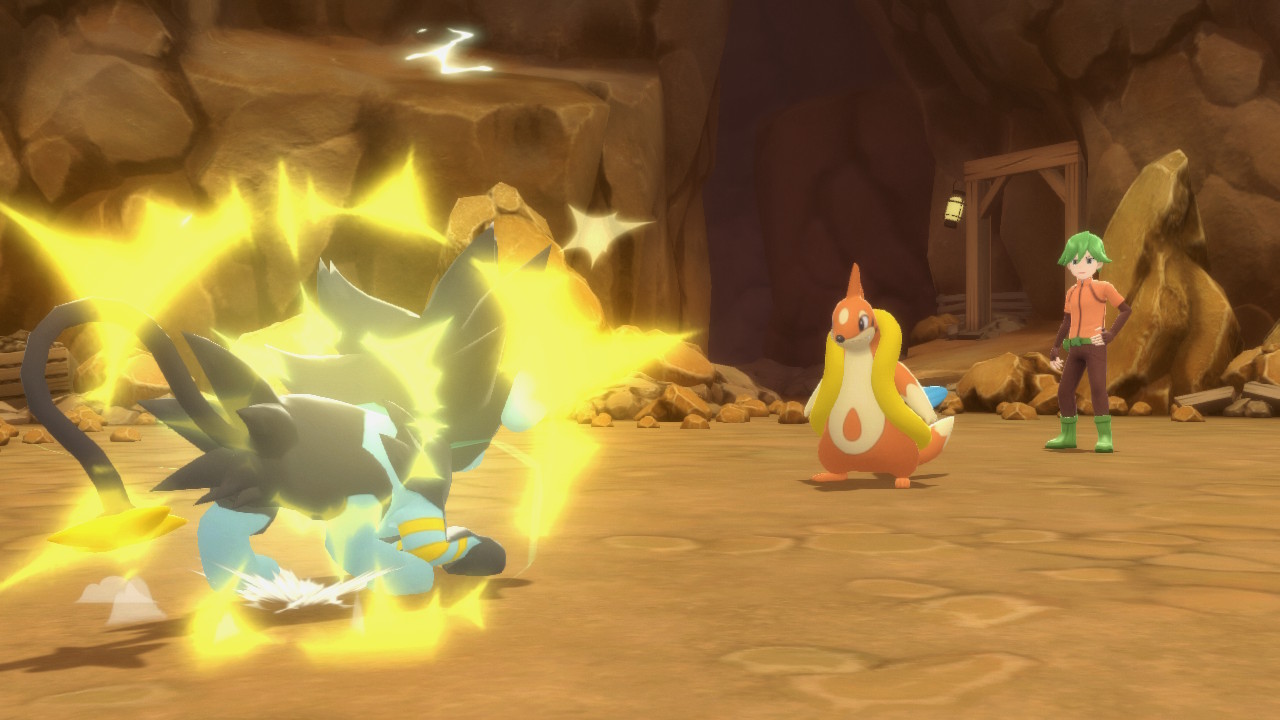 Contests also make a return, along with seals for Pokeballs, which I definitely used a ton in the original releases. Seals work in tandem with contests, showing off a variety of colorful flair when you release your Pokémon from its ball either in a contest, or in battle. Ball capsules can be customized with a key item obtained early on in the adventure, and stickers for the capsules can be collected by talking to NPC’s, purchasing them from shops, or even granted when defeating a gym leader. These different stickers all have colorful effects and shimmers that change the way your Pokemon looks when coming onto the stage – almost like a more customizable confetti effect, if you will. In battle it’s just a nice visual, while in contests the effects are taken into consideration for the presentation aspect of your Pokémon, in tandem with another returning mechanic: Poffins.

Poffins are a great way to increase the contest stats of a Pokemon and can be made by players solo or in wireless groups. Trainers can select berries that they’ve collected and farmed over their adventure to blend into a Poffin. Each snack can have a variety of stats based on which berries are selected, and players can enhance contest stats based on the corresponding flavors, with a Dry flavor increasing the Beauty stat of a Pokémon, for example. Early on, players won’t have a wide variety of berries available, and the ones they do have may only increase a stat by a modest amount. Over time and exploration, however, the player will be able to find and cultivate even more types of berries, allowing them to make even stronger Poffins with bigger boosts. Berries are not only for Poffins, though.

The return of berry cultivation is something I was personally very happy to see. While shaking trees in Pokemon Sword and Shield wasn’t the worst way to obtain the fruit, I much prefer the old method of planting and watering periodically to ensure that the crop I harvest is the one I’m seeking. The better care the player takes of a developing berry tree, the larger the ending yield they will receive at harvest time. Since berries also have useful battle effects, this makes it a lot easier to obtain status effect healing berries, and PP restoring Leppa Berries which are great in a pinch when Ether items aren’t easy to find and you don’t want to back track to a Pokémon Center right away. Being able to spend more time out exploring and collecting is always a joy, and having the right items on hand can make your forest adventure or dungeon spelunking excursions longer and more, er, fruitful.

So what is different? Quite a bit, honestly, and some of those changes are great for the quality of life aspect of improvements. HMs are not as veteran players will remember them – in fact, they exist in TM form and the way to use their field effects is to fire up the Poketch and tap the respective move you want to use and that’s it, it just works. No longer will you need to carry around a creature that you specifically use for HMs, and this allows you to carry the party you want to use for effectiveness instead of sacrificing party slots for field utility. Even if you don’t have a Pokemon in your group capable of using the Hidden Move, a wild Bidoof will come along and make short work of whatever obstacle bars your path. While personally I do find this quite convenient, it does mean less backtracking to explore each nook and cranny of the region, but also means you can progress almost free of worry about missing something useful early on. There are, of course, still out-of-reach areas that you will need to return to, but there won’t be a need to adjust your party to simply move forward in the story any more.

Other new additions include Pokémon Hideouts in the now Grand Underground. Players can explore to find items in the walls like the old days, but now with rooms to explore and find wild monsters ripe for the catching. Amity Square also makes a return, and allows a fan-favorite feature into the mix: once the player has visited, they can then allow a party Pokemon out of its ball to follow along on the journey. While these are smaller additions to the game, the big feature to look out for is Ramnas Park. The new park includes a special area for players to encounter legendary creatures from past generations, with monsters split between versions for trainers to trade and battle with. This all being taken into consideration, there’s just enough new to make the game shine, but enough of the old formula to make this a very nostalgic trip through Sinnoh.

Now let’s take a moment to talk about the elephant in the room: the art style. A lot of people have felt particularly strong about the overworld assets, seeing them as simplistic and cutesy. While these terms definitely do apply, they also are a fond callback to the old days of playing Pokemon when character sprites were large-headed and somewhat goofy. With the evolution of handheld gaming over the next few generations, the player and NPC characters evolved into much more detailed designs that looked more inline with console game assets than the pixelated sprites we had come to know before. While each character does have a cute overworld model, a detailed one also exists for the purposes of battle, showing off each gym leader and trainer type in full glory. Personally, I find this balance to work out quite nicely, but I’m definitely well aware that I’m not everyone and I cannot speak for us all. All I will say is that if the art style is the sole thing that turns you away from these remakes, definitely rethink your decision and weigh the whole picture together before making the call to skip this one. What’s here is really good, and a romp through Sinnoh before seeing it in Pokemon Legends: Arceus won’t hurt, and may make for a fun comparison later on.

Overall, Pokemon Brilliant Diamond and Shining Pearl are a fantastic set of games. While staying true to form is a change to the formula of Pokémon remakes, its not a bad one. Returning to a game that was well-loved feels better than ever, and the little added bits that are there don’t detract at all from a nostalgic experience, well – except that always-on Experience Share. Aside from that small gripe, these upgraded games have a lot to offer to veteran players and can show newer players a window into the history of the franchise. Definitely take a look at these and get ready to visit this massive region. Be you a first time explorer, or a returning veteran, these games are a great core Pokémon experience that shouldn’t be missed by any fan, new or old.

Pokemon Brilliant Diamond and Shining Pearl copy provided by the publisher for the purposes of this review.