Posted on November 18, 2017 by Vincent Ward in Reviews, Switch eShop 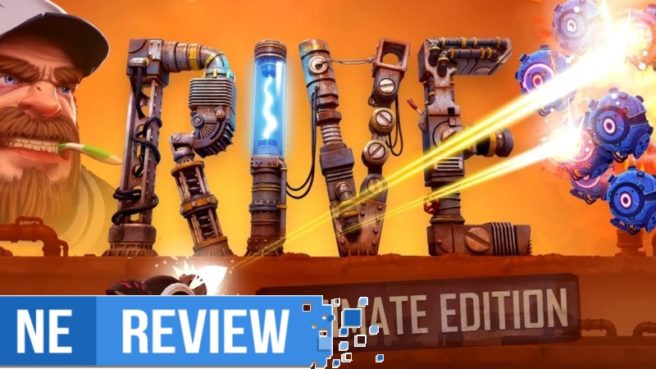 In RIVE, you control a spider-mech that is piloted by a loud mouthed, raunchy captain as he tries to escape a space warehouse that constantly pours threat after threat his way. As far as story- that’s as much as you’re going to get, aside from awkward one-liners and poor pop culture references. The story never grows into much more than that, but that’s completely fine. A game like RIVE doesn’t need a huge encompassing tale to keep you invested, just the quick paced action of the 7ish hour campaign will keep you invested enough.

Combat in your ship doubles as a flying, arcade style 360 shooter to a more claustrophobic but intense platforming shooter, with most of the time centering around the latter. The game wasted absolutely no time throwing you into frenzy, and within seconds you’ll be blasting at machine after machine. At its simplest, RIVE is a fast-paced and vibrant array of destruction and action, but once it crosses this simplicity and starts to grow more difficult, the game nearly becomes too much. 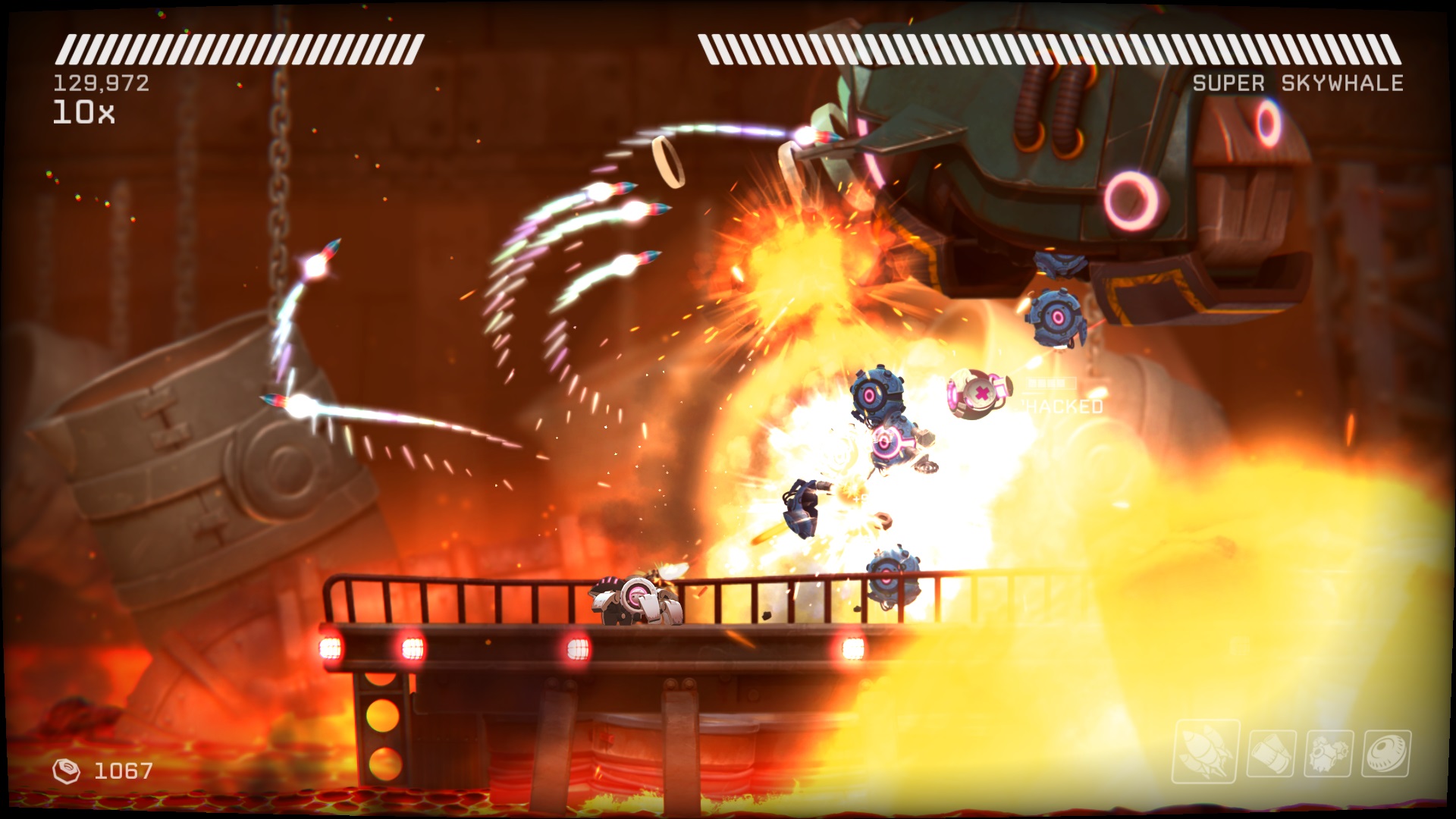 Essentially, RIVE spends far too much time bordering this thin, thin line of too difficult to just right. Too often did I complete a task by dumb luck instead of mastered precision, and when this keeps occurring it makes it hard to want to progress. It didn’t feel like I was completing enemies because I’ve grown better or more aware, but simply because I hit that restart button just enough times to catch a break. This stings, as the controls are remarkably tight. You are in absolute control over where your bullets fly and how your ship maneuvers the obstacles, though sometimes in tighter spaces or in more intense battles the challenges they throw your way or a little bit too ridiculous. Not quite in a “Wow, that was tough and I earned this victory”, more like a “who let this happen?” kinda way.

But it’s those well crafted moments of intensity that balance so well on that fine line of difficulty that make you forget all of that. One particularly hectic moment is when you’re in tight corridors and have to constantly move forward to avoid chasing lava, which is constantly just inches behind your ship. As soon as you finish this, you land in a raft where a large mechanical snake emerges and attacks as other enemies come rushing your way, and never did it feel like an overload but more like a casual progression of difficulty. This sequence of events is what RIVE needed more of, but instead we find it pushing the difficulty just a tad too much.

Visuals do a great job of making the 2D environments feel more dimensional and add more depth, and this is especially appreciated when you’re replaying a sequence over and over again that you have something nice to look at. The whole game feels as if it’s being played from an old booted up arcade machine, and this is a very welcome and pleasant aesthetic choice that fits this game very well. My only singular gripe about its presentation is that when your ship nears the end of its health bar the edges of the screen will illuminate a bright red to signify that it’s in danger. If I’m about to get a game over and clearly being too overwhelmed by enemies to progress, why would flashing a red flight that hinders my view help me in anyway? 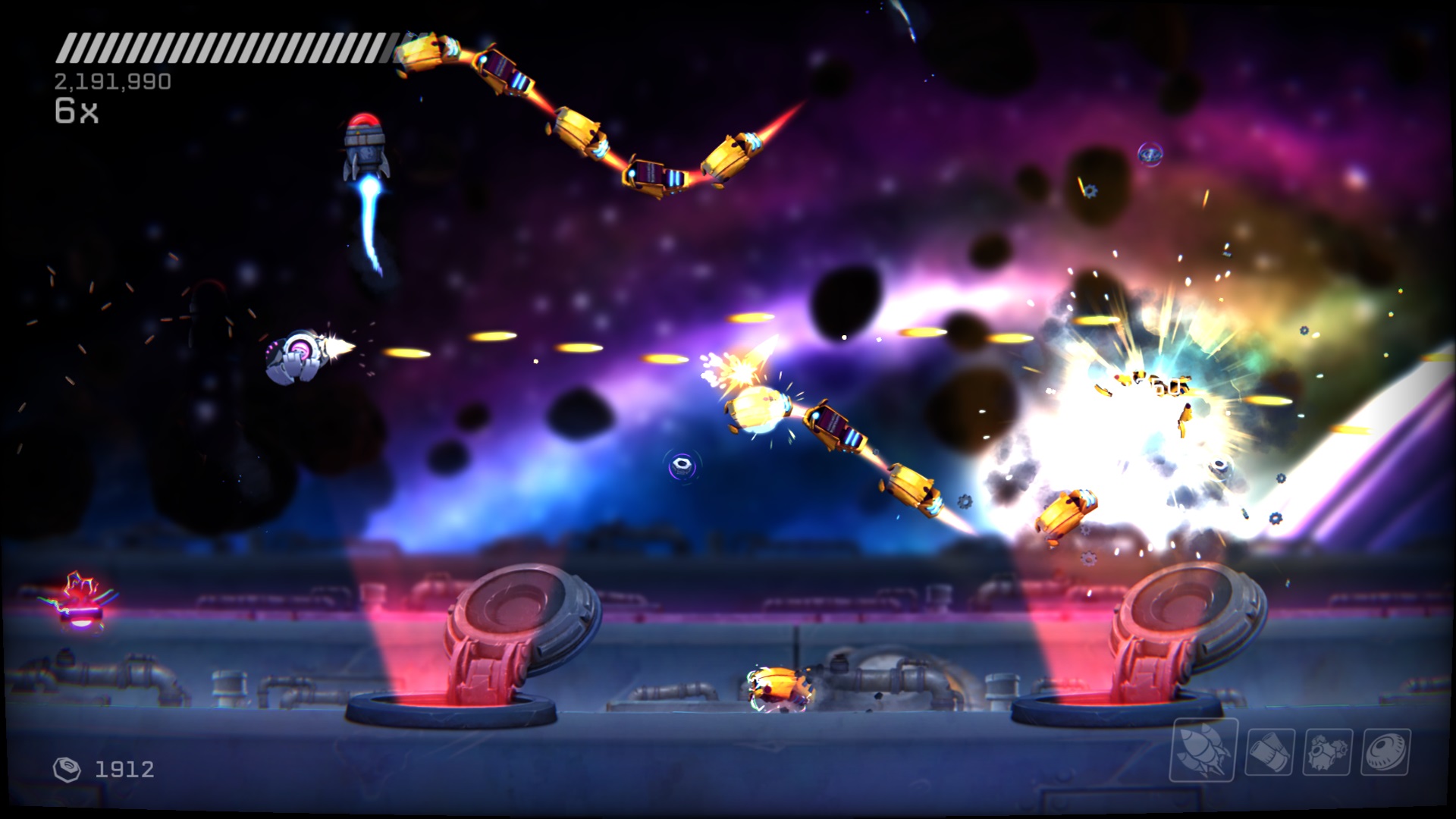 From the second you hit “start”, RIVE is a non-stop thrill ride of action and set pieces that will blow you away with the things they throw your way. You start as a pilot in space who’s blasting away measly asteroids, but within a matter of minutes you’ll find yourself dodging wave after wave of homing missiles and random fire as a menacing, towering boss is making your day all that much harder. That’s all great, and when it works, boy oh boy does it work, but it’s that lack of a comprehensible difficulty that turns me off of more replays. RIVE is fun and addictive when you can look past the difficulty spikes, and unfortunately for some, you may not be able to.

RIVE isn’t a completely bad game – not by any stretch of the imagination. On one side, there’s an intense and crazy fun shooter, that on the Switch works especially well, but it’s anchored down by this nearly unfair difficulty that looms in the distance the second you complete it. For speedrunners and rage addicts this might just be the game for you, but for others this might be a difficult one to recommend. Personally, I was looking for a fun new Switch game and don’t mind heavy difficulty spikes, and even me this overwhelmed me a little bit.