Posted on January 6, 2018 by Dennis Gagliardotto(@LyonHart_) in Reviews, Switch eShop 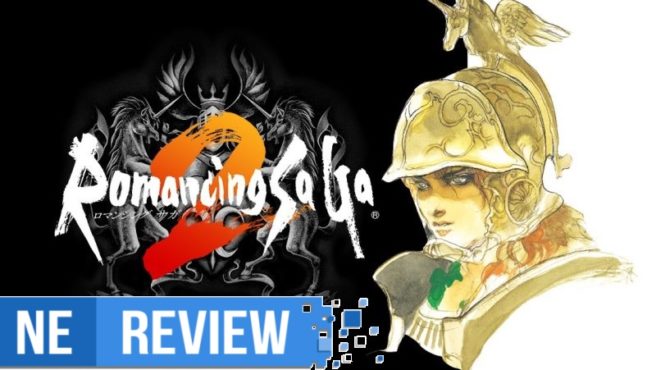 Romancing SaGa and the SaGa series in general has had a long history in the RPG world, first launching in 1989 as The Final Fantasy Legend. While we’ve seen a few SaGa games localized since then, Romancing SaGa 2 in particular never saw a release until recently on mobile a few years ago, before making its way to consoles now just before the new year of 2018. Unfortunately, this is a poor port of the mobile version of the game localized years ago, and not a remaster of the original title on the Super Famicom. This becomes problematic in a lot of ways, and the Switch suffers heavily from it.

The SaGa series in general has always been known for its out-of-the-box thinking and unconventional gameplay elements that differentiates itself from other titles in the genre. It was never a type of franchise to hold your hand and, rather than the typical linearity seen from games of its time, Romancing SaGa had players freely explore cities and the overworld while going through a story tied through generations among generations of characters. It was ambitious for its time, and is seen as a cornerstone for future games not only in the series, but for its genre as well. The big issue with these forward thinking ideas, however, is that over time these have been fleshed out and polished by a plethora of titles, and while Romancing SaGa had a lot of important elements of gameplay that revolutionized RPGs, it’s not something that holds up anymore today. Much like how cassettes once allowed us access to music in our cars, it inevitably became obsolete thanks to CDs, then to auxiliary, and now wireless with Bluetooth. 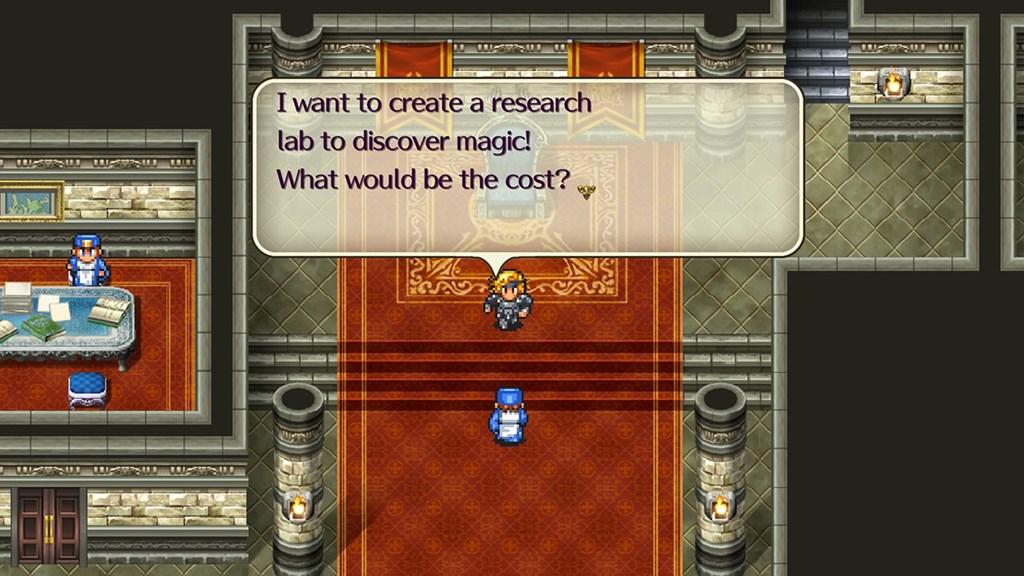 Romancing SaGa 2 takes place in the world of Avalon where a once peaceful kingdom becomes overrun by monsters and demons that plan on destroying everything in their path and ruling what stays. Players will choose what to name their character upon beginning a new game, but will spend a good portion of the first few hours not playing the character they’ve chosen. You’ll instead be placed in the role of King Leon, ruler of Avalon, who’s immensely powerful and meant to guide the player through the game’s mechanics by simply having them play with little to no explanation, but to not feel rushed or failing in the interim thanks to his massive amount of power and health. This gives a chance to get familiar with the menu, mechanics, and layout of the game before switching characters again soon after to begin the real game and challenge. It’s a clever way to go about getting players comfortable, and for RPG aficionados it’ll be an easy thing to pick up and understand, but the uninspired text and layout of the entire battle system may shy new players of the genre away from it.

Leveling is a whole different kind of beast in Romancing SaGa 2, and almost entirely doesn’t feel like leveling but more so like “growing”, as there are no numbers signifying how powerful a character is other than their HP and basic stats such as defense, attack, and so on. Any growth you have after battle is not summed up in XP, but is instead randomly given at the end of every fight to a random character. Sometimes this will result in a new move learned, which can actually occur in the middle of a fight and will override any attack or spell you had selected prior to utilize it, other times increased HP or speed. It will always be arbitrary, and depending on the frequency of a weapon or spell used, it will help raise that stats of those as well.

It’s an odd thing to get used to, and I never really truly felt like I knew if I was doing well or not. I had many encounters and boss fights that felt like I had barely made it out alive, and while I ultimately felt victorious for not reaching a Game Over screen and sparingly using any potions and other items as needed, I could never really come to terms if what I was doing was correct or if I was actually achieving anything or having my party become better. This lack of indication became a little irksome, and while I do appreciate a game that tests wit and inventory management, the real boss fight seems to be random in the long run rather than proficiency. There’s also an occasional bug where after your battle, the victory music will persist and override the overworld music, and sometimes carry over into the next battle until that following one is finished before returning to the music corresponding with your location. While the music is catchy and rather great, having a looping and unfitting track that’s uplifting and melodic celebrating a victory while walking through a dilapidated town filled with carcasses and demons isn’t exactly what I’d call immersive. 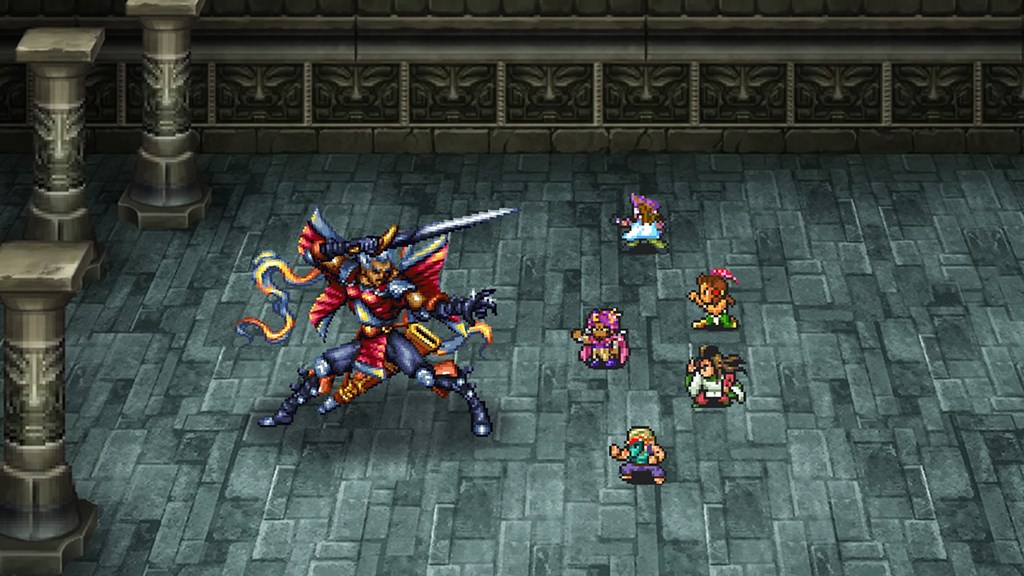 Outside of its battle system and quirks, Romancing SaGa 2 boasts a beautiful world that’s filled with people and wonderful sprites. The colors are vibrant and looking at comparisons between the SNES original and this updated port, the environments truly shine like never before and give it a whole new makeover and breath of fresh air. Unfortunately, however, this is the extent of where its updated differences end. The people that make up most places you go to tend to be boring and the way everyone walks is so nonsensical you’ll frequently find them, and yourself, crashing into one another as well as other objects. It doesn’t help that walking – a basic thing in video games to help you move from point A to point B and beyond – is a pain in itself. There’s this egregious lag while walking for some reason, yet there’s no input lag anywhere else in the game – only during movement. The delay is horrendous, and being on a grid-based layout doesn’t help alleviate this issue at all. You have to be thinking two steps ahead, literally, in order to get where you want without crashing into something or missing your mark.

Romancing SaGa 2 is far from a bad game, but the lack of care and polish Square Enix has put towards this release makes it feel like less of a chance to finally experience an SNES classic, and more of a cash grab on an overpriced mobile title. With its poor performance, banal user interface, and dated mechanics, this becomes extremely hard to recommend at full price. When a game like this is going to act and perform like a mobile title on a dedicated gaming platform, it’s better off to just avoid it all together.

Romancing SaGa – and the SaGa series in general – has a lot to love about it. It revolutionized nonlinear RPGs and brought forth seminal mechanics and gameplay ideas not seen before during its initial launch in the 90s, but now with its debut in the west nearly 20 years after its initial launch, the game is ultimately a poor port of the mobile version released years ago. The game is unoptimized, has horrendous movement lag, and, for some reason, doesn’t have touchscreen support in handheld mode despite coming from mobile. The game has issues on all platforms, and for the current asking price, this is a title that’s not worth your time in its current state, no matter how bad you’re craving a retro RPG.

Romancing SaGa 2 review code provided by Square Enix for the purposes of this review.