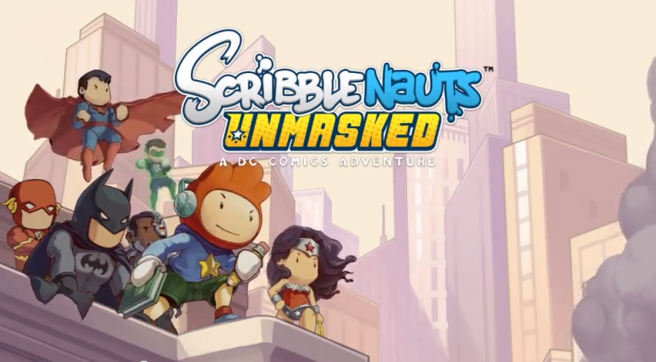 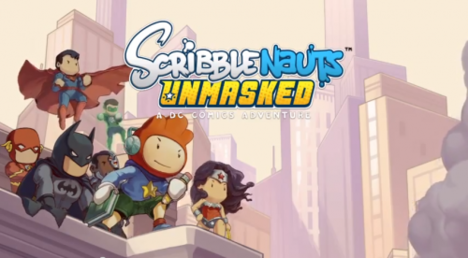 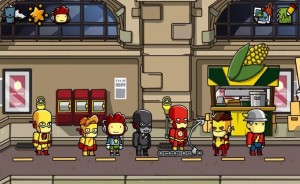 The thing you’ll be confronted with right from the get-go of Scribblenauts: Unmasked is an impressive attention to aesthetic detail that the team took with not only external aspects like comic-book cutscenes and a booming musical score, but also the in-level visuals (backgrounds in particular– what a sight some of them are!) and quirky dialogue. Minimalistic animations and a lack of voice acting ultimately don’t make a huge difference to the experience, and in some cases the low-fi presentation is actually the source of a good chuckle or two when characters like Batman try to look cool or powerful as their arms flail about in traditional Scribblenauts fashion.

One of the coolest things to look at are the sprawling landscapes or set-pieces that are occasionally rendered in polygonal 3D, such as the (what I’m assuming is a) glowing core of the Green Lanterns’ planet (?) “Oa” (or whatever it’s called– thankfully it’s not really all that important to remember these strange names and expansive dictionaries of DC characters if you’re just trying to play Scribblenauts) or the vast lunar landscape behind the Justice League’s towering fortress. They really do go above-and-beyond what would be the minimum required to sell the game, and the added focus of a D.C. backdrop appears to have brought out a very vibrant side of the S’nauts art team. A welcome addition indeed. 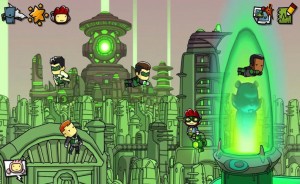 Alas, this level of quality isn’t upheld throughout the entire experience though. When it comes to the level and puzzle design– the two things absolutely central to this game’s success or failure– Unmasked fails for the very reason that it attempts to succeed: Being able to conjure anything just doesn’t seem to make for a very good puzzle game.

The reason for this is multi-faceted, but central to the problem is the fact that any puzzles open enough to take advantage of the colorful dictionary end up being painfully simple to solve, and any puzzles closed and limited in solutions end up being so strange and contrived that you would have to wrack your brain for minutes on end to think up a solution. In many games this challenge would be a great and satisfying addition, but in Scribblenauts it ends up more frustrating than rewarding: When the solution to a puzzle doesn’t seem to follow any logic other than its own internal (and inconsistent) compass, finding the solution feels more like luck than skill.

Many examples of this dilemma arise within the gameplay. One such “closed” scenario had several characters who had been turned to stone and were asking for Maxwell’s (the main character) help in returning to the world of flesh. My first instinct was a “healing spray”, but since “spray” doesn’t exist in the world of Scribblenauts I went with “healing shaving cream”. Rubbing this on their bodies had not an ounce of healing power.

So I decided I should go more practical and took out a chisel. Unfortunately, hammering away at them only took away their health and seemed to upset them, so I was once again out in the cold. Punching them didn’t help either. So what was I to do?

The problem with the closed puzzles is not that their solutions are limited per se– it’s that their solutions rely far more on trial-and-error than intuition or intelligence. Presented with the question of “What will scare Catwoman?”, I summoned a “large scary mouse”. After all, what cat-obsessed human being (or… any human being for that matter?) wouldn’t be afraid of a giant scary mouse? Catwoman, apparently. She took it like a champ.

I thought for a moment: “Okay, she doesn’t care about things with the adjective ‘scary’. Fair enough. I’ll just summon dead Batman.”

And I did. I summoned “dead Batman” to the play area to try and scare Catwoman, because that makes sense given the DC cannon. Was our feline heroine frightened though? Nay, quite the opposite: She fell in love with the deceased fellow as if he were not deceased! 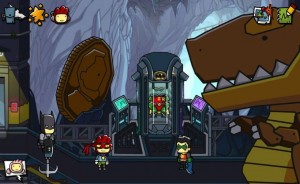 The disinterest that comes from being unable to find a solution to a puzzle you weren’t all that interested in solving in the first place is partially offset by the hefty chuckles you’ll get from summoning “dead Batman” and watching someone fall in love with him (or summoning a “bomb-shooting cat”– a personal favorite). To say that this charm would entirely make up for the elementary puzzles would be dishonest if you’re someone looking for legitimate cerebral satisfaction, but honest if the player is either a younger member of the human race or someone that isn’t interested in deeper or more innately satisfying gameplay 100% of the time. Some groups will find the game’s charm enjoyable; others, irrelevant. 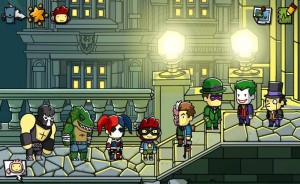 In terms of puzzles that are too open, look to any of the game’s combat puzzles which can be solved by summoning any weapon and mashing the “attack” button over and over again. Or– even more effectively– just add the adjective “dead” to weaker enemies and take on the boss characters with a machine gun. Reusing solutions doesn’t net you as many in-game “reputation points”, but that ultimately didn’t seem to affect my play sessions in any way.

So we end up with this pretty interesting game design question: How much should a player be expected to create their own fun in an emergent game such as Scribblenauts? If you’re not having fun, isn’t it your own fault for not being creative enough?

In this case the answer is only partially “yes”. On one hand, there’s a strong case to be made that if you’re feeling particularly creative and amused by silly images or concepts on any given day, you can make your own fun in Unmasked without issue. The flip side to that is that the game itself doesn’t do a whole lot to push the player in that direction using gameplay concepts or level design; perhaps they merely expect you to do it without motivation– and you can do that– but the game would be significantly stronger if there were a reason to be creative beyond “It won’t be fun unless you are.”

If that’s the only reason, perhaps there’s a stronger impetus to just play another game than to work to enjoy this one. After all, if it’s harder to have fun in a game than it is to win the game, maybe you have things backwards.

The bottom line…?
Your overall enjoyment of Scribblenauts: Unmasked will depend largely on whether you’re interested in DC Comics or whether you enjoyed past Scribblenauts games. If you do or you have, I would very quickly recommend what I consider to be the most polished and impressive Scribblenauts game to date. If not, the decision is a bit harder: Do you enjoy games that tend to lack gameplay depth but try to make up for it in aesthetic appeal? Then maybe this one will tickle your fancy. Additionally, I would absolutely and eagerly recommend this game to younger audiences. If you have children or you know children, this game will keep them busy– and keep their brains working– for hours and hours.

If, however, you’re more interested in something that will showcase a proficiency in game design and organic fun, I’d probably look elsewhere.

A ‘Neutral’ rating means that, at the end of the day, the game in question succeeded at what it was trying to do, but not without some major flaws. If the concept and style appeal to you, you’ll likely still enjoy it, but it can’t be unquestioningly recommended to everyone.

Second Opinion: Scribblenauts Unmasked is seemingly aimed at DC fans. You won’t get the references, you won’t know the environments, and you won’t recognize some characters unless you love the franchise. Luckily for me I really love the DC Universe so I understood where the game was coming from, but others might feel a bit blasé towards the game.

Scribblenauts fans, though, may get some enjoyment from playing it. It has all of the classic Scribblenauts features including visuals, controls, animations, etc. There are some mini missions in which– to complete– you need to be familiar with DC characters, but those can (thankfully) be ignored.

But if you are neither a DC nor a Scribblenauts fan then don’t spend your money; UNLESS you are a young child. Then do spend you or your parents’ money: it’s got Batman for goodness’s sake.