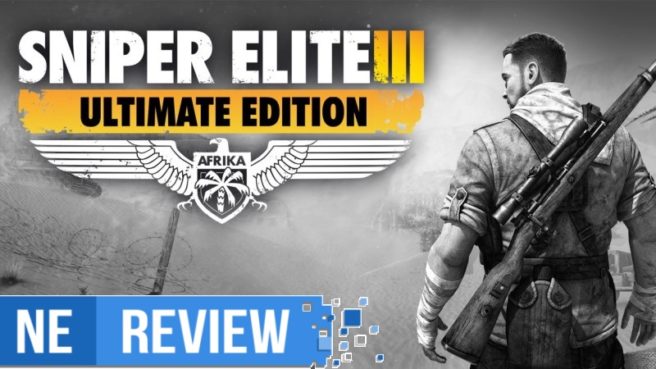 If you were lucky enough to first became acquainted with gaming during any decade earlier than the one we’re in now, then you’ll surely be familiar with a breed of game that has faded in prominence over recent years – “AA” or “Double-A” games. As budgets for both development and marketing have skyrocketed throughout the industry, little space has been left for plucky upstarts to cut their teeth alongside the EAs and Activisions of the world, no more so than when it comes to shooters. Developers often have to scale their projects and studios back, or submit to becoming a cog in the bigger machine through acquisitions and buyouts just to remain in operation. That hasn’t been the case for the rather aptly named Rebellion though, and their seemingly-ever-present tactical World War 2 shooter Sniper Elite. Over four main entries and a handful of spinoffs, Sniper Elite has managed to garner something of a cult following for itself, solidifying its position in the dwindling “AA” space – so much so that Rebellion has seen fit to bring not one, but two Sniper Elite games to the Switch this year. We now find ourselves treated to an “Ultimate Edition” of the third game in the series, but just how “Ultimate” it can be considered is ultimately up for debate.

Originally released back in 2014 as a cross-generation title, Sniper Elite 3 is the first game in the series to forgo the typically linear level designs and mission layouts of the first two games in favor of more open, sandbox style maps for you to mess about in. This game takes place in North Africa, and serves as a prequel to its predecessor, Sniper Elite V2 – not that you’d notice, mind, because its main character is achingly forgettable. Adding insult to injury Karl is voiced by none other than the iconic Tom Clarke Hill, the man who brought Sgt. Cortez to life in Timesplitters, and Tony the Tiger to life in my breakfast. Despite the vocal pedigree Rebellion have failed to surround Karl with anything that resembles a compelling story – he’s following his orders, and must assassinate a Nazi Commander named Vahlen – and that’s essentially all there is to it. There is a very lazy attempt at injecting a personal vendetta into the narrative toward the end of the game, but all it really gave me was a very big laugh. The dialogue is dry and direct, the supporting characters lack any depth whatsoever, and there is practically zero motivation to be found in the game’s plot beyond simply killing all of the very pantomime-esque baddies. It all has about as much personality as a 3 AM History Channel re-run, and the only purpose the narrative seems to serve is to bring you from one location to the next location – which to be fair, it does. 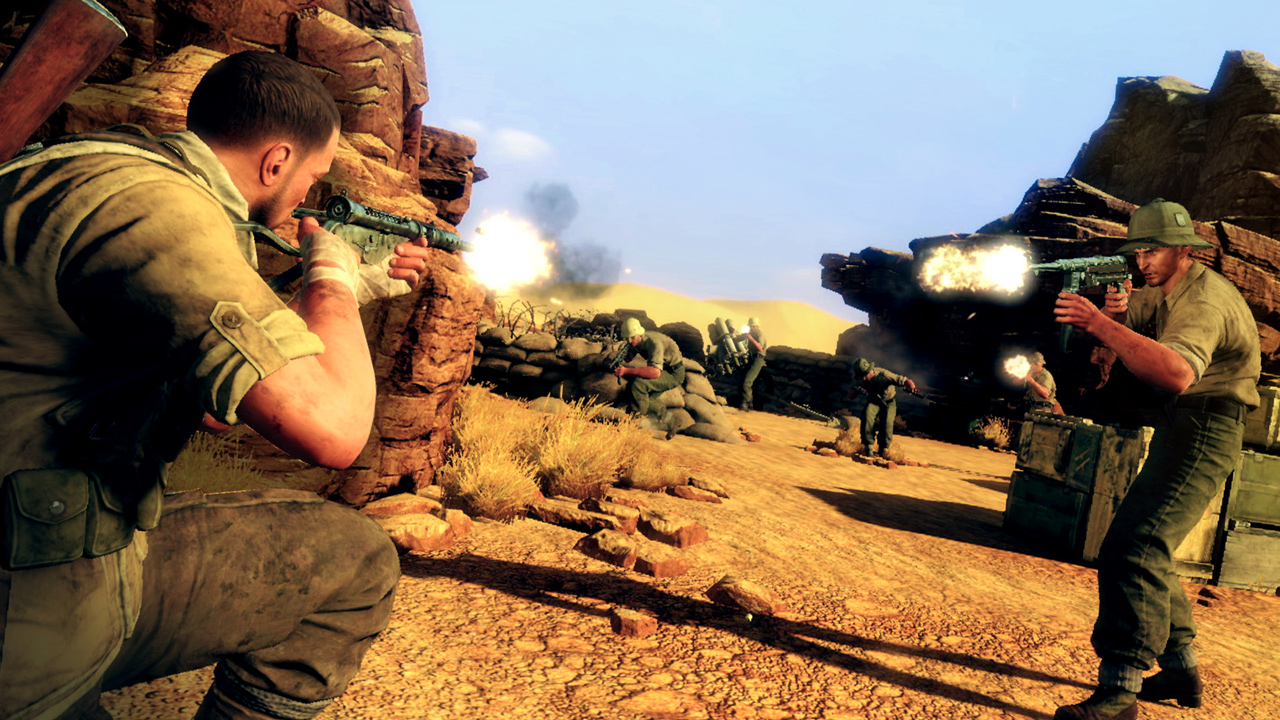 At those locations then, you’re typically given a handful of primary objectives sequentially along with a couple of hidden optional ones that encourage exploration. You are then let loose across a handful of decently sized, relatively open-ended maps, with various choke points and lines of sight that allow for a decent variety of stealth tactics such as placing mines stabbing men in the neck. Gameplay-wise Sniper Elite 3 sits somewhere between Hitman and Metal Gear Solid V, albeit without the creativity of the former, nor the polish of the latter.

The core of the experience, sniping, is ultimately just “fine”. You pick a secluded spot on the map with a nice vantage point, line up your shot (the included gyro aiming is an absolute must), you hold your breath, and you’re then treated to a Mortal Kombat-style slow-mo X-ray shot of your bullet as it zips through the air, and magically transforms the inside-bits of a person’s body into outside bits. It’s far and away the most satisfying portion of the game’s stealth focus, but the macabre fulfillment can wear thin after ten or so burst eyeballs/testicles. If and when you do become bored of it (or if extreme gore just isn’t your thing) a quick visit to the options menu let’s you the change the frequency of the effect from being less common, to quicker in nature, all the way to simply being “off”. Even on harder difficulties, the whole sniping mechanic feels very simplistic – there aren’t many factors to consider apart from some mild bullet drop that the game readily exposes via a small red “x”, that shows you exactly where your shot will land. You can turn a lot of the in-game assists off, but even then, the most risky shots you can take are usually successful so long as you “just aim up a bit” – and try not to shoot the sand dunes. 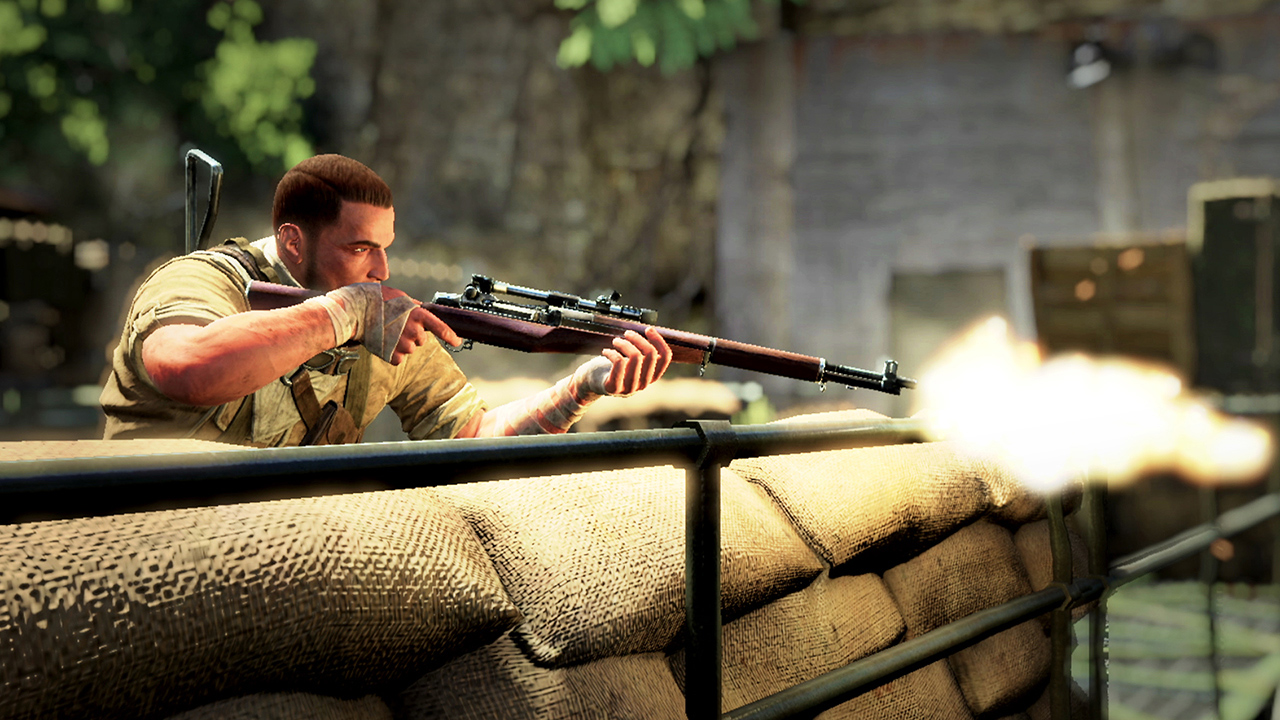 Speaking of which, the North African setting of Sniper Elite 3 is an initially welcome change of pace for the WW2 shooter, and to be fair to Rebellion, they’ve done as much as they could to inject as much visual variety into each mission as possible. There are castles, farms and sprawling factories – the lot, and it all feels pleasingly detailed and lived in. Unfortunately though, by the end of the eight mission campaign, I was utterly sick of the colors yellow and orange, and oddly, I longed for a detour to more familiar WW2 settings like Southern Europe and the Pacific.

Despite the fatigue that sets in as the game’s setting stagnates, Sniper Elite 3 is actually a bit of a technical marvel on the Switch. I spent most of my time with the game in handheld mode, and visually speaking, it holds up incredibly well. The game runs at a near constant 30 frames per second, the resolution is crisp and clear, and the draw distances are genuinely impressive. I might have to start an online petition by the way – just so I can get Rebellion to reveal whatever witchcraft they’ve concocted regarding load times on Switch. I never had to wait more than seven or eight seconds to enter into any of the game’s sizeable maps or to load up a quick-save. From a technical standpoint, it is without a doubt one of the most proficient and accomplished ports I have seen arrive on the Switch. The game is totally true to its source material, for better and for worse. 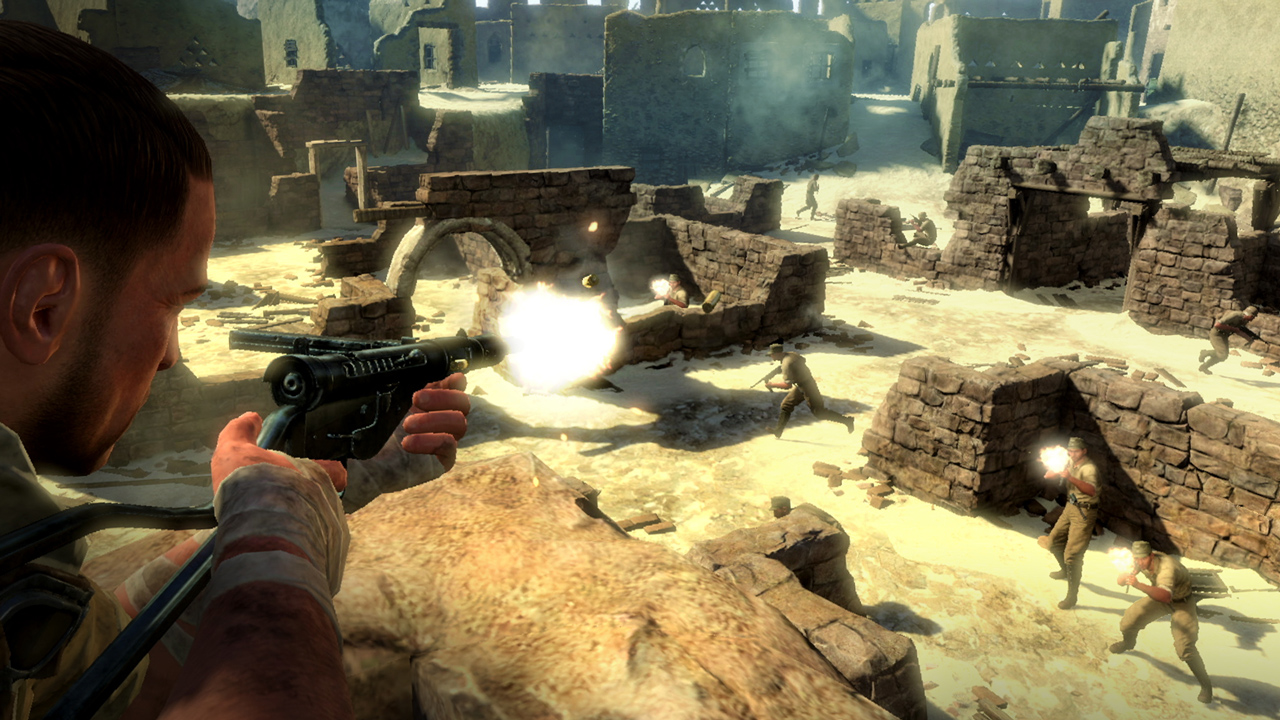 Competent yet bland sniping and technical prowess aside, there are unfortunately a couple of detrimental problems I have with Sniper Elite 3, that really end up hurting the experience as a whole. These issues are especially apparent when you’re trying to play the game as intended – with stealth and subtlety – the enemy AI for instance, is pathetic. “German soldiers” (oddly, no Nazi symbolism here) jitter about their set paths, casually stepping over and around the bodies you’ve left in your wake without a care in the world – however there’s always a chance they might hear you taking your silenced pistol out of its holster from twenty feet away – which in some cases can undo up to an hour of stealthy wet-work if you haven’t been manually saving your game. Enemies will always respond to your sniper shots in the same cyclical fashion too, no matter where you are attacking from – removing any faint scrap of realism from heated encounters. The save system is also a pain – on one occasion, my game auto-saved over my manual save just as I had failed a mission I spent an hour and a half playing, leaving me no choice but to curse out loud for 20 minutes and then restart the entire section. The game’s biggest issue, however, is found in its audio. Attempting to locate enemies solely based off of the frankly ridiculous amount of talking they do is impossible, even with headphones. Any soldier that’s having a chinwag within a 200-foot radius inexplicably sounds as if they are talking directly into your ear, and there were plenty of times where I couldn’t hear enemies as they casually strolled up right behind me, purely because one dude 400 miles away was telling his mate what he likes about guns.

Like almost every other aspect of Sniper Elite 3, even its subtitle, “Ultimate Edition” ends up being something of a double edged sword. On one hand, there’s quite a bit of content for you to work through here – there’s an eight mission campaign, four additional DLC missions including one where you get to blast Hitler right in his singular testicle (that’s twice I’ve written that word now), a survival mode, co-op across almost all modes (both local and online), and a rather enjoyable competitive multiplayer mode that could end up being a bit of a sleeper hit on Switch. There’s also lots and lots of guns, and that’s very, very good. You’re looking at a solid 20 to 30 hours of content for the more thorough among you – the issue with this value though, is in how it’s dished out over the course of the game, and more specifically, the way it affects your progression. After the first proper campaign mission, I was handed every DLC weapon and attachment that has been bundled with this release, leaving very little room for excitement as I leveled up and unlocked the base game’s generally inferior weaponry, after the fact. The only piece of equipment I was happy to have later added to my loadout was a slightly-improved silenced sidearm, which I ended up using far more frequently than the big hulking sniper rifle I had strapped to my back. In the absence of a compelling narrative, this lopsided progression left me playing Sniper Elite 3: Ultimate Edition purely for the thrill of it with very little else to motivate me – especially in light of the game’s other issues.

Beyond everything else, what irritates me the most about Sniper Elite 3: Ultimate Edition is that Rebellion actually managed to remedy most of the problems I have had with this game in its sequel, Sniper Elite 4 – particularly the wacky audio and the erratic enemy AI. If these improvements had been retroactively implemented for this re-release, then I feel like the “Ultimate Edition” subtitle would have been fully earned. As it stands, I can’t bring myself to fully recommend Sniper Elite 3: Ultimate Edition without the caveats I’ve mentioned. I don’t totally dislike the game, and it could find an audience on Switch if the multiplayer catches on – but unless there’s a discount or a price cut, I would refrain from enlisting just yet.

Sniper Elite 3 Ultimate Edition review copy provided by Rebellion for the purposes of this review.