[Review] Snipperclips – Cut it out, together!

Posted on March 7, 2017 by Jakob Vujovic(@jakovujo) in Reviews, Switch eShop 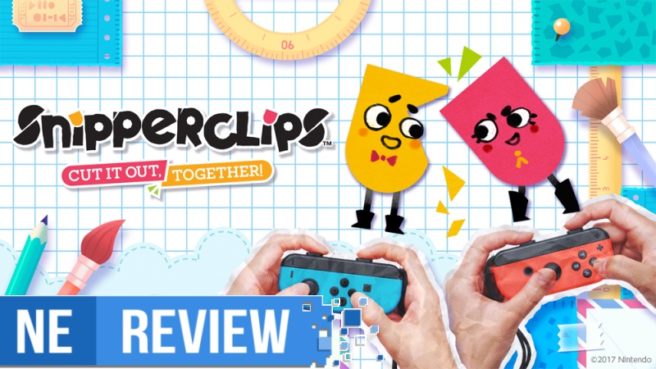 In most cases I find it exhausting when reviews for launch games go on and on about the new piece of hardware it’s on. With that said, it’s unavoidable to mention how well suited Snipperclips is to the modularity and modes of the Switch and its Joy-Con. On top of being an excellent puzzle game on its own, Snipperclips is the Switch’s premier local multiplayer showcase.

There are three modes in Snipperclips: puzzle worlds for 1-2 players, party, and blitz modes for 2-4 players. In all of them the game essentially works the same. Each player controls a paper cutout in the shape of a worn pencil eraser who can cut the other player’s eraser nub person and parts of the level out by overlapping the part of their shape that they want to cut and pressing ‘A’ to snip.

Puzzle world is where the real meat of the game is. You’ll progress through short levels with simple but varied objectives, ranging anywhere from cutting each other to make a shape that matches a given dotted outline to cutting each other up in order to scoop up and throw a basketball into a net. It can still be fun to play through these levels on your own, and because of the physics-heavy nature of the puzzles there are often multiple solutions, but Snipperclips is at its best when playing with a friend. 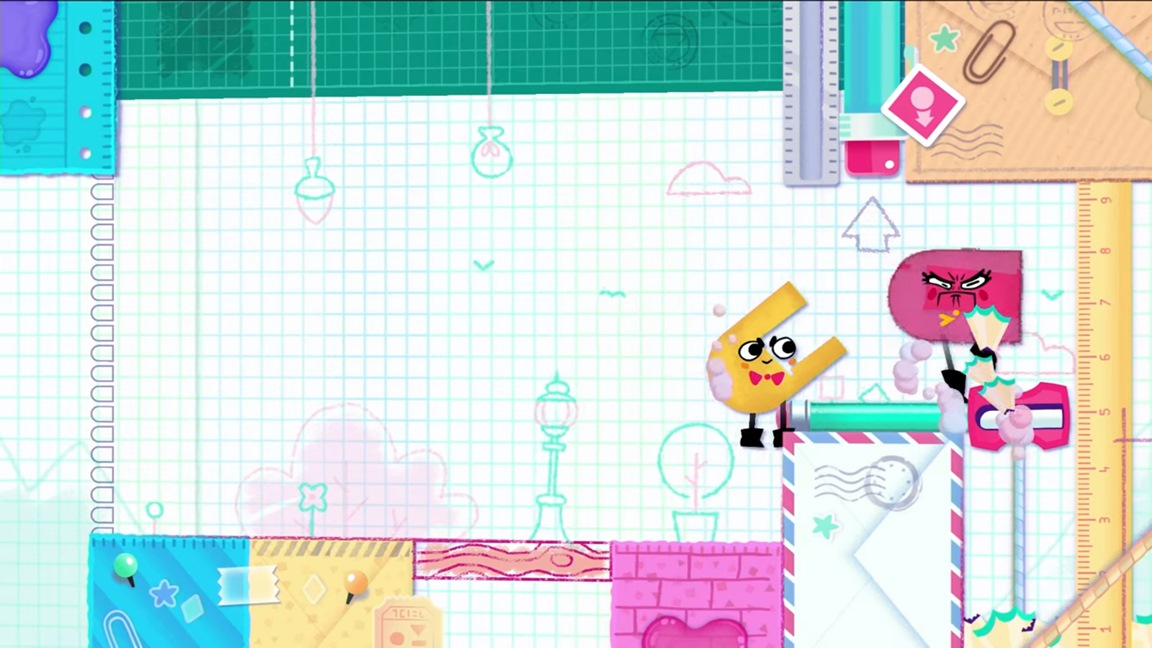 Party mode is a smaller selection of puzzle levels built to accommodate up to four players. Blitz mode is your choice of the sports hockey, baseball, and “dojo” as played in the Snipperclips physics engine. Your mileage may vary with these games, depending if you want to work together through puzzle solving or compete. Dojo is a nice outlet for the otherwise unproductive urge to troll other players in regular modes by indiscriminately snipping at each other.

Don’t get Snipperclips if you won’t be able to play co-op, however the beauty of this game on the Switch means that it’s easy to find anyone anywhere and force them to play a few quick levels with you. For the most part it’s still pretty fun on your own, but having to press a button to swap between the character you control does lead to a few mechanics and levels that are really awkward to get through.

This is the kind of puzzle game that could have easily been cool mechanically but with a dull sketchbook paper look. There’s a level of polish here that really earns this game its place as an essential game to get for your Switch. Characters are funny and expressive. The tension between them read through their expression, grunts and giggles reminds me of the equally weirdly uncomfortable “Bossa Nova” from the Rhythm Heaven series. Snipperclips really feels like an essential game to have for any Switch early adopter.

Snipperclips is an excellent co-op puzzle game in its own right that is enhanced with the Switch’s out-of-the-box local multiplayer capabilities. Don’t get it to play by yourself as it’s more meant to be played with multiple people. Still, if you have a Switch, even the most stubborn person will have to play when you bring the console to them. Unless you absolutely hate each other, I guarantee you’ll have a good time with Switch’s next best game to Zelda.

Snipperclips review copy provided by Nintendo for the purposes of this review.