Posted on September 20, 2020 by Dennis(@LyonHart_) in Reviews, Switch eShop 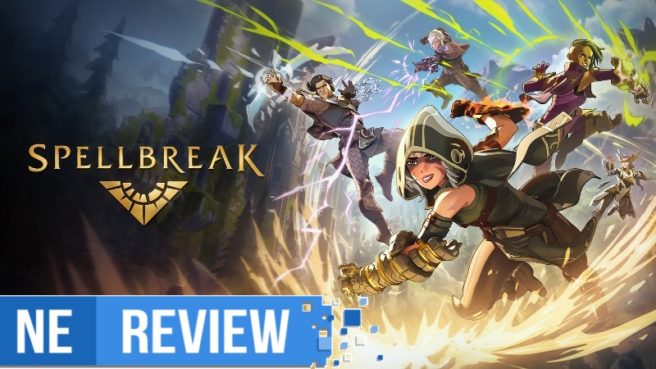 One could argue that the battle royale scene has become incredibly stale with a bunch of clones that have been looking to capitalize on the popularity of other titles in the genre. Since then, it has become a bit of a juggernaut with pros and cons on the industry. Spellbreak now adds itself to the long lineup of battle royale games, and while we’ve seen plenty come and go, it’s nice that this one has come through and finally delivers an experience with seamless cross-play and cross-progression across all platforms, leads the way in consumer respect, and offers an appealing look with a magical take.

One of the things you have to worry about in games that are multiplatform of this caliber is that, while the inclusion of cross-play is always appreciated, you always have to make sure that a live-service title like this has as much parity as possible to deliver seamless performance and progression for all users. Thankfully, outside of some minor graphical differences – most of which involves lighting and shading – Spellbreak retains its vision and gameplay across all devices and on the Switch performs excellently. Spellbeak is the most fun I’ve had with a battle royale game in a very long time, and a big part of it has to do with its approach to its gameplay and hidden lore.

After being in early access for so long, it’s nice to see a full release, though there are still some missing features. It’s in a very simplistic state, but it makes for an easy to pick up experience that doesn’t overload you with information and menus in all sorts of directions. The other good news is that the in-game store isn’t abusive and is there as more of a complementary feature, as it mostly contains content you can normally earn. It simply allows players to get quicker access to the items belonging to each tier within each class and play style without having to grind completely using elements that they may not click with. 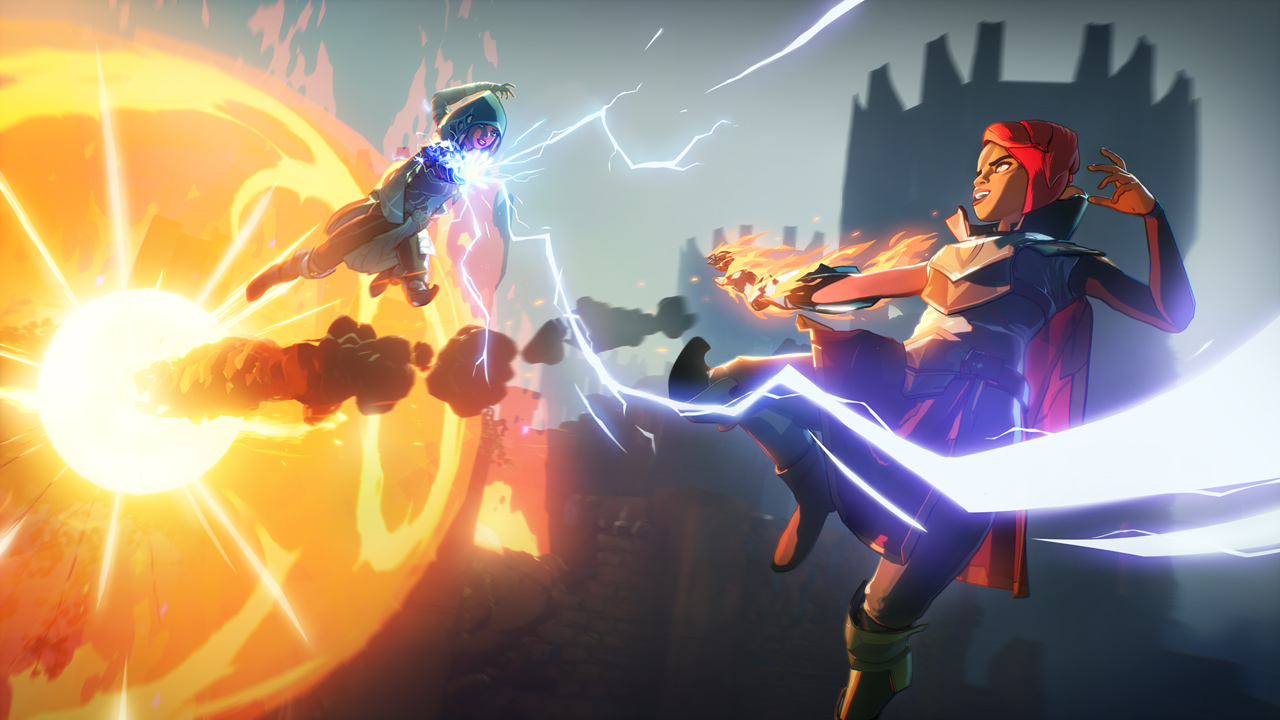 Spellbreak’s approach to battle royale adds hero types that give each element its own advantages and game type as opposed to just choosing a character that looks like the default poster-boy/girl and surviving with no real objective. The beautiful Hollow Lands players will battle it out within fit a comfy six elements and classes that give you the playstyle you want: Toxicologist (poison, damage over time and stealth), Frostborn (ice, high damage from long range), Pyromancer (fire, well-balanced area control), Conduit (lightning, rapid-fire runic efficiency), Stoneshaper (rock/earth, armored mid-range brawler), and Tempest (wind, high-flying mobility). Playing each one definitely has its own distinct style and you’ll have to play around at first to see which one fits you the most, but the nice thing is that you’re never really limited to what you choose as once you’re dropped into the Hollow Lands, various chests spread throughout. These can contain a multitude of items including new elementals to equip to your other arm, leaving you with one main class type, and another being whichever element you pick up or switch out as you make it to be the last one standing.

Items in chests aren’t just new weapons, though, as they also give you stat boosts as you play, so it’s always good to be on the lookout for your main three equipment types: Belts, Boots, and Amulets. These will typically give you armor, overall walk/run speed, and mana bumps respectively and give you a better chance at survival when pitted against the other mages. Outside of chests, there are bubbles scattered throughout that exude a radiant aura that usually contain legendary items, which are the strongest compared to the Epic, Rare, Uncommon, and Common types indicated by the color surrounding the item itself – usually Orange, Purple, Blue, Green, or White.

Unlike a lot of other battle royale games, it’s not the usual glorified hide and go seek fest with a one-and-done approach, giving players a chance to revive so long as they’re not exiled from another enemy player. When you’re downed and you’re playing Duo or Squad modes, you’ll turn into an orb of light that you can slowly move and control as you try to get away to get into a safe location to be revived assuming you still have other teammates available. Typically you’ll have over a minute, so the revival time is flexible, and battles can change and sway within a matter of seconds sometimes depending on who you’re up against. Most matches I played I was usually always with my team, and even if we spread out a bit we were still within viewing range of each other, but there was always a poor soul that was all alone that would get downed within moments, as there’s not much you can do in a 2 or 3 v 1 situation. 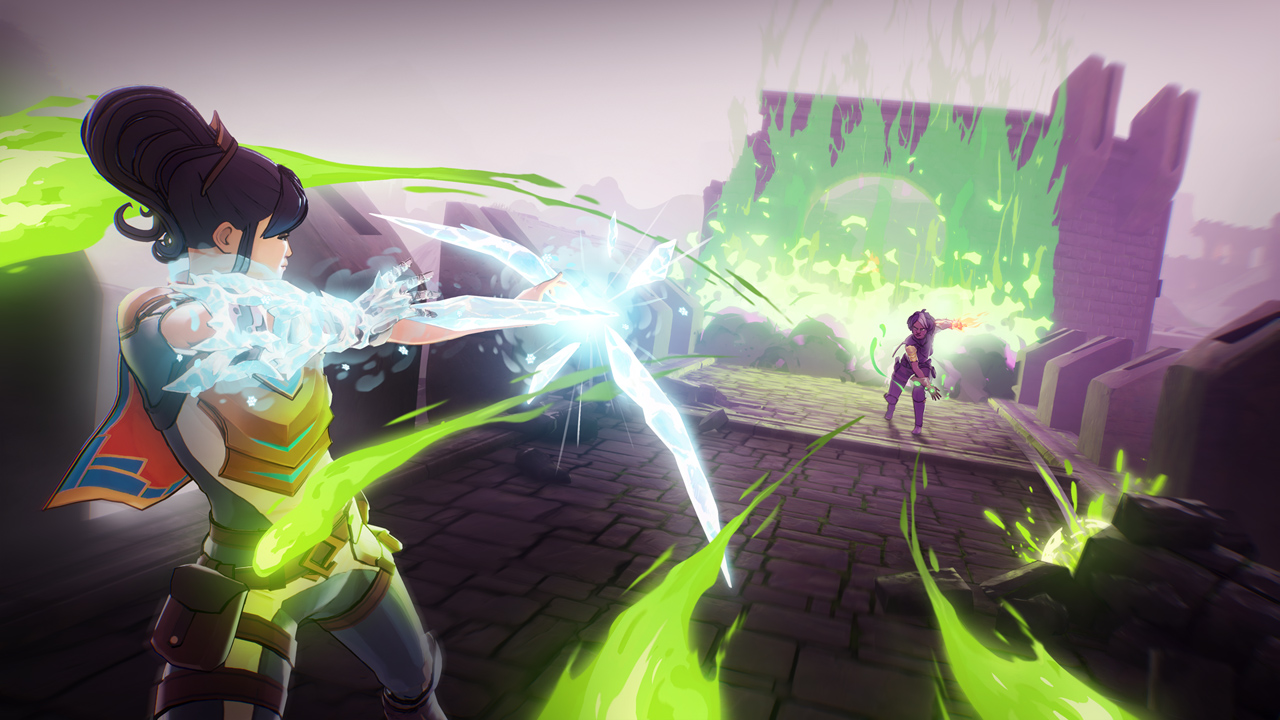 Sometimes you can get lucky with the right amount of combined elements – as this has happened to me when I was the last one standing with two others that were on the same team at the very end of the game with the battlefield having been reduced to just a few feet – but more often than not you’re better off doing your best to be defensive and going in another direction. This is where the special runes will come in and you can utilize things like flight and invisibility. These specials usually hold a spot right in the middle of your move-set that serve as your left and right arms and also come with different colors and rarities just like the weapons acquire across the Hollow Lands. Just like the elements, these are also exchanged out at any time so long as you come across others, but only one is able to be equipped at a time as the others you’ll drop.

While the fights can be a lot of fun as you watch elements cross over and the effects caused by magical mayhem, searching and looting can be just as enjoyale if not more so as there’s that element of excitement not only from what you’ll get, but the changing environments you constantly find yourself in. From Fever Ridge to Hope’s End, Banehelm Keep to Halcyon Reach, and Hymnwood Ruins to Shadowgrace Forest, each part of Spellbreak’s land gives a level of environmental storytelling that opens itself to a deep and mythological lore waiting to expelled. At the time of this review, Spellbreak is mainly a battle royale game, though the section for “Chapters” is currently grayed out, meaning the fact that it is there gives the possibility for an even more exciting future ahead of it that could see a potential PVE and story-based mode to deepen and enrich the experience – already doing more than most games like this within the genre. Spellbreak doesn’t feel like another clone and instead comes into its own with a fresh perspective thanks to its art direction and magical fusion that never once feels like it’s doing anything from a monetization front either despite its free-to-play nature. It’s magical in all ways – not just in its gameplay – and has a lot of consumer respect as well, giving in-game gold to have purchasable stuff in the store as well.

Customization is a big part of making a mage look the way you want to as well. Although the initial obtainment of items and the like may seem a bit rough, things get easier as you naturally play when it comes to acquiring everything as you level up your classes – each with its own reward set – and of course the store providing a rotating selection of items for you to buy, from artifacts to the usual skins to player banners, icons, and more. You can also use Talent Points making for each playstyle to be your way with occasional passives, choosing any talents you like so long as you don’t max out its 6-point structure, combining any slight buffs you’ll unlock as you level up, allowing for higher jumps, quicker spell casts, and defensive assists. 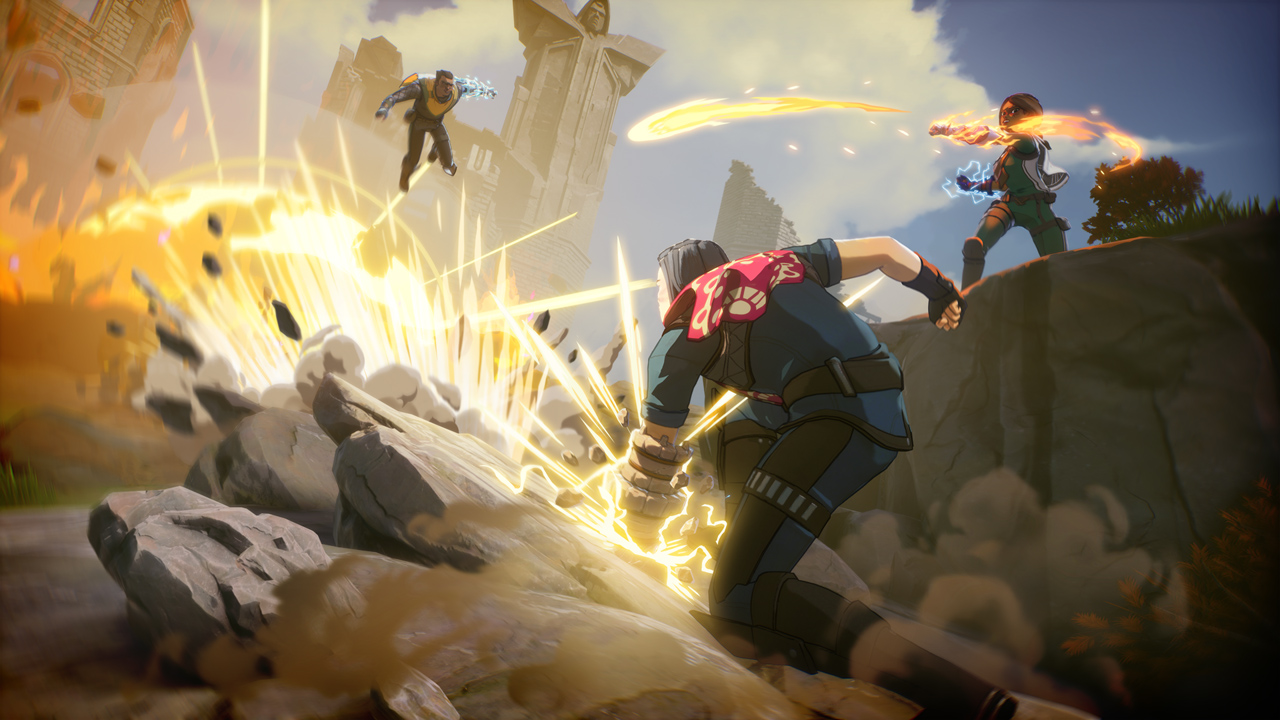 Outside of battle, Spellbreak also gives one of the cleanest and most beautiful user interfaces I’ve seen in quite some time. From the moment you’re in its splash screen to when you’re actually interacting with the menus, the game has a visual flair from the get-go with its accessibility and making things easy to read. Options are to the point allowing for more compatibility, though one thing I did notice compared to other games that are cross-play enabled is the inability to actually turn off the feature – unless I just simply didn’t see it despite actively looking for it. I played with others on both PC and Switch, and while there were occasional disconnects, I believe this had less to do with the actual functionality and more with connectivity issues, though the more frequent (albeit still rare) nature may have been purely coincidental.

Spellbreak is an incredibly beautiful and fresh take on the battle royale genre, and as someone who typically doesn’t play these sorts of games – or free-to-play games in general – it’s been an eye-opening experience to finally try out and experience something with true cross-play and cross-progression parity across all platforms as I’ve been going back and forth seamlessly between Switch and PC with little to no issue both in feeling and gameplay. While the PC platform will typically have a higher advantage, Spellbreak does well to be flexible so that you can still accommodate for a faster response time with a mouse, and still be able to have an equal playing field with a Switch controller whether you’re playing in handheld or docked mode. My only complaint at the moment is, as it’s fresh out of early access, the store has very few things to customize your character with, so most people end up looking the same. There’s also the hope that with the world the team has built for Spellbreak, there’s a lot that has untapped potential, including having a great story mode or a PVE portion of the game to expand beyond a basic battle royale game.

Spellbreak brings a new twist to the battle royale genre by giving players a more magical approach with an attractive art style and easy-to-pick-up type of gameplay that gets you right into the match with other mages, but still has a layer of strategy as you go through the Hollow Lands. Choosing from a variety of elements determines your class, and add this to the fact that elements can be combined, the battlefield of mages can get incredibly frenetic, especially as the map closes in on itself and players are left to survive in a much smaller area as the minutes pass by. Spellbreak keeps things friendly, fun, and refreshing by also not allowing an immediate death to cause it to be the end of the game, as teammates can revive you and you’re able to continue so long as you’re not exiled by someone on an opposing team. Spellbreak looks and runs great on Switch, and overall the game shows promise in being a beautiful new outlook on what the battle royale genre can be like when time and care is put into it, with a beautiful landscape that tells a story on its own.