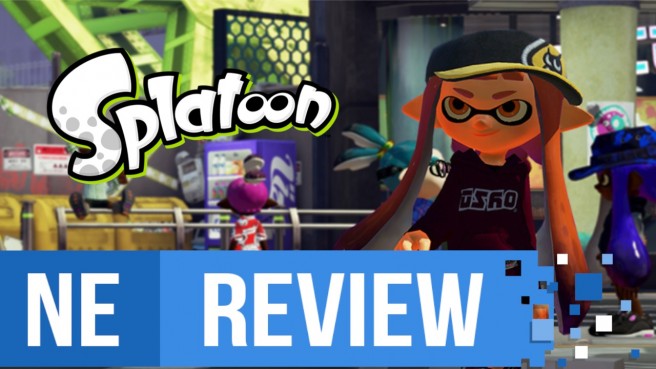 Splatoon is officially launching in just a matter of minutes, so we’re giving this one final bump!

Finally we’ve come upon the day when Splatoon reviews are allowed to be posted. Here’s a 15 minute video with a whole lot of what I thought about the game; would you believe me if I said this was edited down from a thirty minute video? I could seriously make a 60 minute video about this game honestly. Maybe I will someday.

Our complete video review is below. Hit the break for the summary, recommendation, and rating.

And so Nintendo’s electric squidsperiment succeeds, passing by the finish line with neon flying colors, probably while wearing a basketball jersey and big headphones. The minor gripes– which, in light of everything else, are not petty but are minor– about missing online features don’t hold much ground when you’re voraciously painting skateparks and warehouses, yelling profanities or your analog for them at the TV, taking a break to play a wonderfully smooth and strange campaign, and then going back to fight online for hours and hours and hours on end. Splatoon covers nearly all of its bases as far as creating an addicting shell for an intensely deep competitive gameplay anatomy, doesn’t skimp on layering a eccentric and polished aesthetic skin over that, and ingeniously paces its content to keep you returning as often as you can.

Pretty much top to bottom, every part of it is a dance between polished comfort and excited brilliance, not unlike a bedroom splashed with neon paint. Its moments of genius are plentiful, and everything about it wholly memorable.

Except the weird online blunders with friend features. The game could do without those and be unversally better for it.

The separation between the “buy it now” crowd and the “buy it in August” crowd when the update to add friend features is pretty easily distinguished: If you can deal without being able to reliably (you can, just not reliably) play with a group of friends until August, there should be no hesitation. Everything about the game except that one misstep is completely thoughtful and startlingly deep, and the singleplayer experience (especially that final boss) isn’t to be missed either.

Still, there’s no doubting that you’ll get a slightly more “complete” game in August. I don’t think it’ll be that much more fun than it is now– how could it be?– but if you’re picky, well, it can’t hurt to bide just a bit more time I guess.