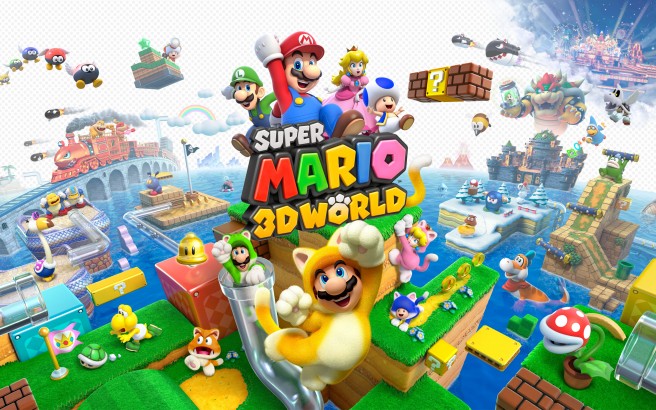 “If it ain’t broke, make it dramatically better.”

To say that Nintendo has released too many platforming Mario games in the last two years would not be particularly hyperbolic if you concern yourself with only the raw numbers. 2011 saw the release of Super Mario 3D Land on 3DS, 2012 had New Super Mario Bros. 2 (3DS) and New Super Mario Bros. U (Wii U), and now 2013 has slid soundly to a spectacular finish with Super Mario 3D World. At first glance it may seem like an annualization of gaming’s finest platforming franchise, but it would be erroneous to criticize Nintendo’s strategy when they manage to make every one of these games at the very least first-rate in fundamental design, and it would be downright dishonest to suggest that we would be better off if they hadn’t created something as lustrous and enjoyable as Super Mario 3D World. 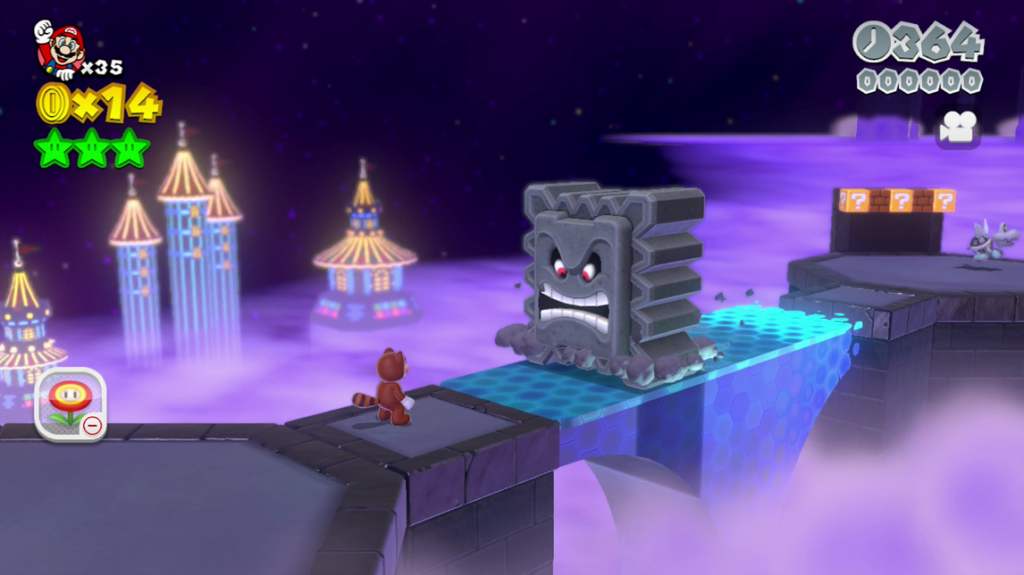 A higher resolution and great art direction do wonders for 3D World.

Though a simple screenshot would suffice in showcasing 3D World’s commitment to a staggering level of polish, it would not describe quite what the game is and what its goals are. Though it wears the guise of a Mario title, confusing it with a test of your platforming skills or your ability to read and react to obstacles quickly and without mistakes would be at least a partial misinterpretation, because the game focuses on delivering a consistent and perfected stream of pleasurable aesthetic and tactile sensations rather than– at least in your initial run through (more on this later)– making you feel a grand sense of accomplishment for your skills in navigating challenging obstacle courses. To contextualize, this is much more in line with Nintendo’s latter day philosophy of being fun rather than fulfilling, as demonstrated by the smooth play experience of something like New Super Mario Bros. U.

But here, with Super Mario 3D World, they have gotten as close to perfecting that merrymaking, recreational experience as the limits of my imagination could suppose would be possible. The level of attention paid to every aspect of the adventure (and, thankfully, it often does feel like an adventure) is astounding, stunning, remarkable, incredible, extraordinary– multiple synonyms are absolutely required just to convey how much effort appears to have been put into making this game as close to perfect as one could envision it being. It’s a very impressive creation.

Perhaps somewhat unexpectedly given how strong Nintendo’s skills in level design are, the game’s aesthetics actually take a front row seat in Super Mario 3D World, and it does quite a bit of good. The core structure of stages, as mentioned a couple of paragraphs ago, is not suited to engage you with the game too intensely on an initial run-through, but this nonchalant step into the background opens up a comfortable niche that the visuals, sound effects, and music come forth to fill. These elements– the aesthetics– are quick to mesmerize you– to serve as the necessary conduit through which you will interact with the whole experience– and the game, intelligently, refuses to dwell on any one feeling for too long. Playing it is like staring only at a professional juggler’s hands as she tosses up hundreds of different objects, two or three of which you can see at any one time, and many of which you will see several times throughout the show, but none of which stay in her hands for very long. Moments before you would grow bored of the first three objects, she throws them up and grabs three new ones; moments before (before) you grow tired of those new items, they move on and a new set effortlessly come in the door. This is the experience of playing 3D World: constantly interesting, constantly changing, constantly elegant.

Never once do these elements show a single sign of weakness, either. The music is wildly varied– the signature jazz, the spacey piano music, the upbeat violin songs, etc– and not a single song is of poorer quality than any other. The visuals hold steady at a steely 60 frames per second, and not a single texture is jaggy, unintentionally low resolution, or otherwise distasteful. The sound effects are exceptionally well crafted and subtly complicated, and not a single one feels as though it could have been taken from a batch of stock sounds. There is an unwavering consistency to the caliber of this experience’s aesthetic, and it is tremendously noteworthy for that.

This consistency is mirrored without flaw by the level design of the game, which also politely refuses to show any sign of imperfection. Rarely does a level truly shatter your perception of what is possible in a platforming game, but never is a level boring, tedious, or otherwise poorly designed. There is– I repeat– a consistency to the whole game that is adamant about remaining impenetrable.

Except, I suppose, that there is one minor gripe to be had with the overall package: a handful of levels in the game have buttons in them that can only be pressed by a specific character of the four you can choose. These buttons usually give out a stamp (one of the game’s collectable items) or a green star (another one of the game’s collectable items), but really only serve as an extremely artificial (and optional) restriction on your play experience. It would have been one thing to place a collectable over a gap so wide that only Princess Peach could traverse it, but to reduce that concept (which is already somewhat inelegant) down to a literal button seems like an uncharacteristically lazy design choice for a game that is otherwise so flawless. 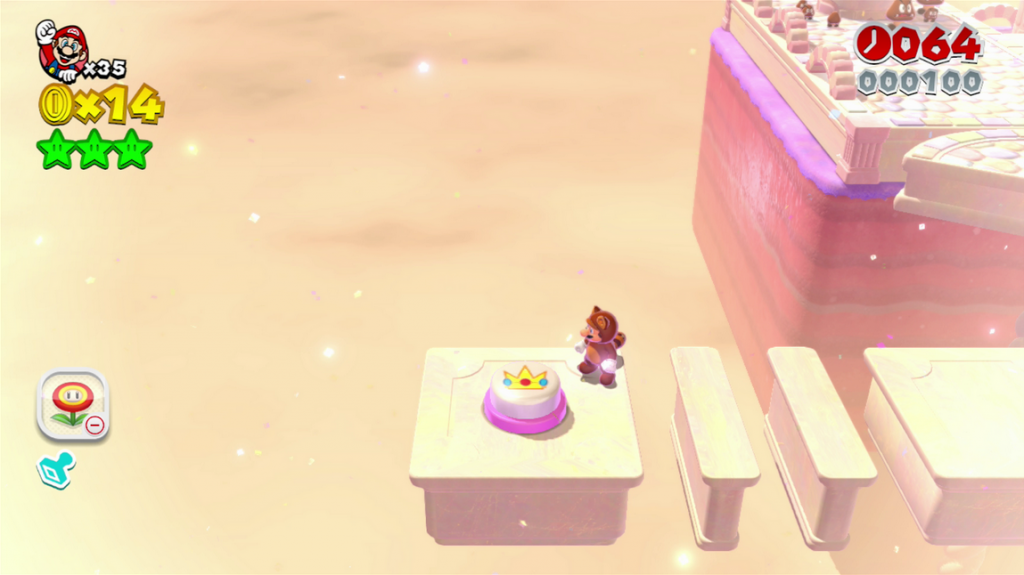 These sorts of switches represent the game’s only real blemish.

Playing the game multiplayer is, while not as strong or focused as a run-through solo, an enjoyable experience all the same. Much like any other local multiplayer experience, things get very chaotic and it’s quite difficult to be particularly productive, but that’s just the nature of the game– perhaps with one friend rather than three (I played with the full force of four players) it would be easier to enjoy on a less silly level, but as it stands it’s merely a pleasant addition to a great single-player game. Levels are large enough to fit all four characters at once, and the only true frustrations with the mode come when one player remains willfully ignorant of his or her allies and runs too far ahead, forcing everyone else into protective bubbles that cease any activities they may have been doing. 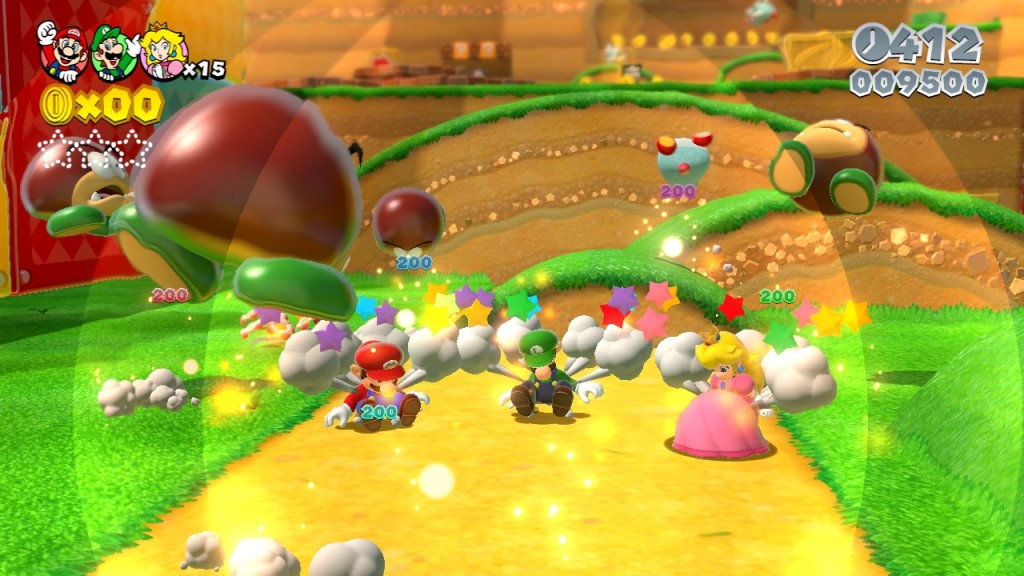 Multiplayer is as fun as ever, but it’s not anything unexpected.

Throughout the review I have made reference to your “initial run through” of Super Mario 3D World, which I will explain now: In every regular (non-boss, non-special) level of 3D World there are three green stars to collect and a stamp to pick up. In your initial play-through, the game pushes you forward with enough interesting content that you’ll likely want to skip over most of those collectables and just experience the feelings brought upon primarily by the aesthetics. After that, you may– and likely will– begin a second run-through where you collect all of the aforementioned stars and stamps, and with this shift in focus the game makes an effortless turn towards a more challenging side of its design.

These things can be fairly well hidden at times, requiring lengthy searches through very linear levels, or they can be placed in locations that require you to demonstrate a knowledge of Mario’s physics and abilities. It would be assumed that this collection process is occasionally tedious (especially when based on exploration) since you’ve already played through everything this section of the game has to offer, but, in a stroke of luck, the strengths of the game’s initial appeal (those “aesthetics” we keep referring to) provide a fundamentally pleasurable net on which to fall whenever the collecting would normally get dull. It’s not clear whether this duality was created intentionally, but it certainly works extremely well.

On top of this re-traversal, the game also has a bevy of fully-new post-game content that will keep you extremely busy, and it succeeds at feeling not like a chore but like a continuation of the game you were playing prior to the credits initially rolling.

In conclusion, Super Mario 3D World is not just exceptionally well designed, but it’s also extremely generous with its spoils. It (almost) never artificially restricts your enjoyment of its content, by its own standards it’s respectful of your time through and through without a single moment of filler, and the whole game pulsates with a vibrant, youthful energy that is indicative of a team who cared deeply about what the final product felt like on a fundamental level. Half of the game is built to give you a smooth and enjoyable experience that requires little from you as a player, and the other half– the harder half– is readily available for those that don’t just want the pure bliss of pretty music and a stunning attention to small details. It’s a beautifully focused and polished experience that makes you feel very strongly as though the team that made it is comprised of folks who have spent their entire lives working towards this level of excellence, even if that’s unlikely to be true.

A “thumbs up” rating means that, at the end of the day, the game in question succeeded at what it was trying to do. If the concept and style appeal to you, it’s absolutely worth playing.
The recommendation:

It’s tempting to universally declare that no one could regret a purchase of Super Mario 3D World, but to do such a thing would be dishonest: If you are extremely against the idea of a game being primarily used for fleeting pleasure rather than profundity, you may find the game to have little value, but if your gaming tastes lay in either the camp of fun or the camp of reflexive/physical skill (rather than intellectual), this game is an excellent representation of both of those things and you should absolutely not hesitate to procure a copy as soon as possible. Platforming fans rejoice– nay, fans of fun rejoice: EAD Tokyo has created something exceptional.