Posted on February 3, 2018 by Jakob Vujovic(@jakovujo) in Reviews, Switch eShop 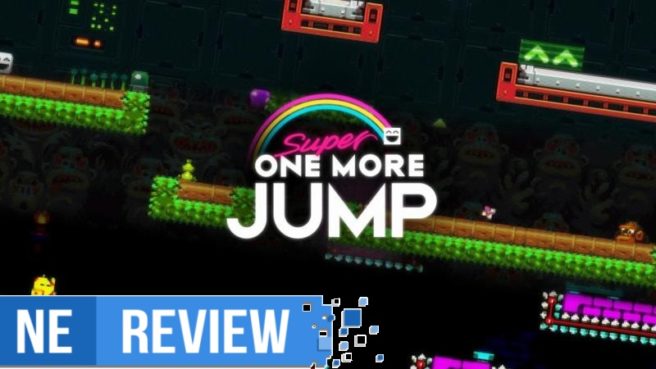 There’s not a lot to dislike about Super One More Jump. On its surface it looks like a fairly generic Super Meat Boy derivative, but beyond its stout square character, the ease in which you can very quickly die in its short challenge levels – and the instant reset when you do – Super One More Jump shares more with auto-runner mobile games than the intricate fine-tuned play that a Meat Boy demands. It wasn’t a surprise to learn that this is a souped-up version of Premo Games’ One More Jump. As a result it’s mechanically undercooked to be a slightly awkward fit for a dedicated console with a full array of buttons and sticks.

The game itself is exceedingly simple, at least in its single-button controls. While the unnamed character automatically runs forward, your only input is to jump. There’s no variance in short or long hops depending on how long the button is held, just a simple and predictable arch. Stage elements like objects that reverse your character’s running direction, or platforms that pop in and out of view as you approach test your reflexes and add interest to its exceedingly simple controls.

The most interesting mechanic that’s present in every stage is the gravity switching mechanic. Each time your character makes contact with a wall or ceiling it’ll flip to a vertical or upside-down orientation. If you jump off the edge of a platform, you’ll orbit around to its opposite side. It’s a bit jarring that there’s a sharp spike in the smooth orbital arch when you do flip around a platform. It just makes it that tiny bit less sleek. 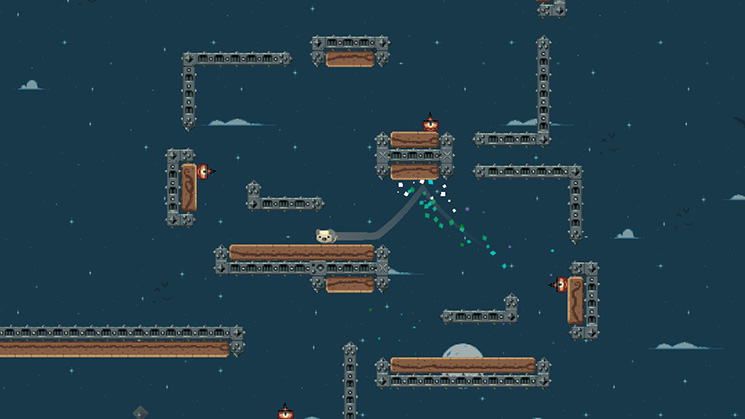 Super One More Jump hinges on these level elements and modifiers to compensate for its single button controls. It’s mostly successful at this, especially in late game levels that throw quick jumps and level modifiers in quick succession. At its best, Super One More Jump goes further than being purely a game of reflexes. Its challenges become navigational puzzles – if there’s an chaotic assortment of vertical and horizontal platforms with all the stages elements the game has introduced then how do I get through this cacophony of on-screen noise. The answer is often to die a lot until you’ve developed a light muscle memory for any single challenge.

It’s one thing to purposefully go after single-button design elegance, but it’s another just to feel like a mobile port. Unfortunately, Super One More Jump falls more into the latter than the former. As a consequence of platformers being designed for mobile, having the single input of a tap to the screen isn’t a choice to forgo complex controls in favor of design elegance. If you go for anything more complex when your only input is a touchscreen, clunky is the kindest way to describe the on-screen buttons that mobile games often default to.

Given the ultra simplistic control scheme, it wasn’t a surprise that this console port is the “Super” edition of the original One More Jump for mobile platforms. In some ways that prefix feels disingenuous to the tradition of 8-bit to 16-bit “Super” sequels. The new inputs that a console controller offers in comparison to a touch screen aren’t used. Granted, levels and modes are expanded here, but this isn’t quite going from the limitations of 1985’s Metroid to 1994’s Super Metroid that, looking purely at character control, fleshes things out quite a bit. Super Metroid is an unreasonably high bar for almost anything, but as a game working itself into the tradition of adding “Super” to the title, it feels lacking in a lineage of increasing mechanical intricacy. 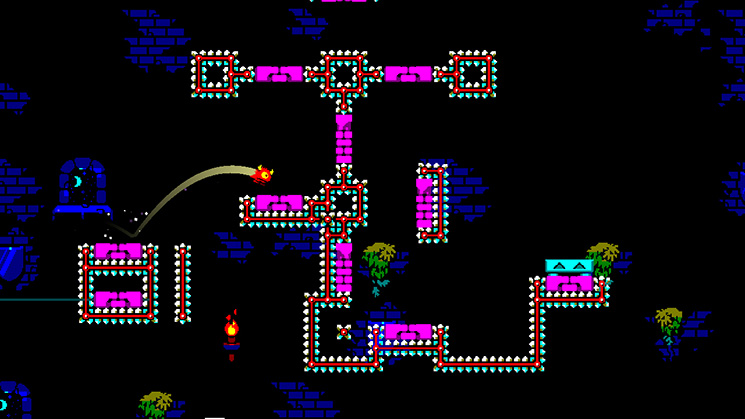 It does make up for this in its bevy of extras play modes and options. Practice mode slows down the character’s movement speed if you’re having trouble wrapping your head around a level. Its roughly 100 stages can be replayed with modifiers a mirror mode that flips the layout, night mode that restricts visibility to a spotlight area around your character, and rotation mode if you’re in the mood for nausea. Endless mode is exactly what it sounds like and what you’ve probably seen on phones dozens of times. Of course, there’s also local co-op which is always a fun addition provided you have the right people to play with. If anything, this feature is the best justification that this game should be on the Switch. The single button control scheme is perfectly at home on a split Joy-Con.

Super One More Jump is a fun time. Its single-button controls and auto-running mechanics make its roots as a mobile game obvious, and maybe even a misfit for a full console. When it ramps up the challenge and stages become self contained reflex puzzle boxes it definitely gets more engaging, but I can’t shake the feeling that it could’ve been extrapolated into something more.

Super One More Jump review code provided by SMG Studio for the purposes of this review.