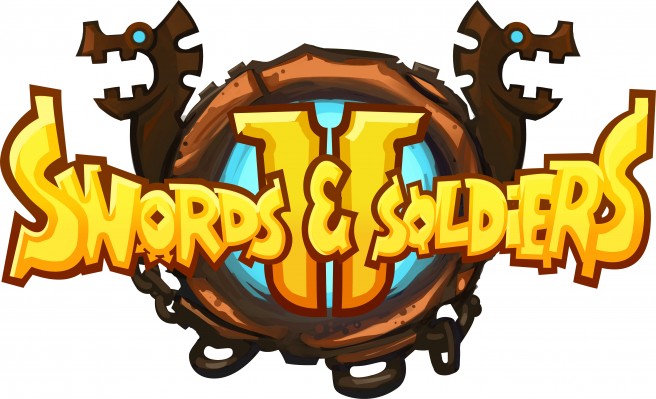 Swords and Soldiers II is simple in every sense of the word. Its graphics, gameplay, and story won’t surprise you, but that’s just fine. In this game’s case, simplicity is great. You see, on the surface, it doesn’t look like Swords and Soldiers II has much to offer, but writing it off as just that is quite the unfair judgement. You won’t be finding a deep philosophical story that revolves around corrupt politics and military morales, and that’s okay. You won’t be spending hours learning the intricate and complex controls and applying them to fast paced battles, and that’s okay. The game just simply throws you into a side-scrolling battle against three armies that are filled with charm, charisma, and just the right amount of puns that’ll keep you smiling all the way through, and that’s okay.

Something you’ll notice right off the bat about this title is that it absolutely oozes personality. Every character is as funny as they are barbaric, and their quirky commentary to nearly every battle is sure to keep you entertained throughout the fairly short story mode. Not to mention the world of Swords and Soldiers is just as fun as the characters, so don’t be surprised if you find yourself battling baddies in a land made up entirely of root beer right before a battle in hell. All the characters animations are gleefully over-exaggerated, and you’ll find yourself constantly finding new and small little details that add to the overall charm. Also, the game’s crisp HD visuals look fantastic as well. 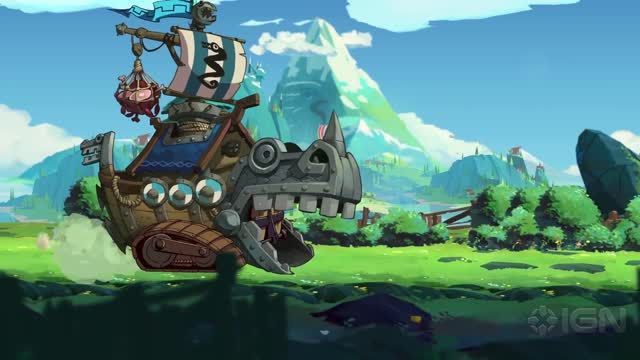 This game looks stunning with its beautiful coat of HD

In terms of gameplay, things go a little differently. While the title’s world and characters excel at providing charm, the gameplay excels in keeping the experience simple. You control a single army with only two primary buttons, and once you send out a troop with ZL, it’s all up to them. You don’t guide them where to go or place them anywhere strategically – you just send them all out and they’ll take it upon themselves to reach their destination and kill anything in their way. It’s a real-time-strategy game at its simplist. If you want a more interactive power, you can use magic with ZR. With magic, you can choose where to directly cast a spell, so it’s up to you whether you want to heal one of your troops or cause mayhem on the enemy’s turf. It’s all incredibly basic and won’t take long at all to master.

Unfortunately, while I appreciate the developer trying to keep things simple, it backfires when you play for an extended period of time. Most battles can be conquered by sending out a large number of troops that are equipped to take on the challenge at hand, so once I send them out, I have to just sit there and wait until they either all die out or I reach the end. This can take minutes at a time, which can be pretty straining on the players. Thankfully, the previously mentioned charm helps out in giving me something to look at while I wait, but after a while, it grows a bit stale. I found myself constantly thinking ‘how much longer?’ with every battle, and always found it difficult to continue the story while playing for more than two or three missions. 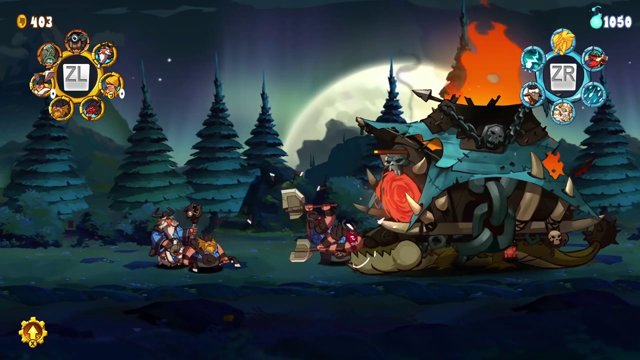 Moments where you’re forced to just sit back and watch the action happen appear a bit too often….

The story mode isn’t the only thing Swords and Soldiers II provides to keep your time. There’s a multiplayer mode in which you can play against a friend’s army as you two battle it out, and even a challenge mode for you to take complete control over what armies you play as and where. The multiplayer mode actually provided me with some fun rounds with friends, as the whole experience becomes much more interactive with two human beings controlling opposite ends of the field. Being able to completely foil your friend’s plan is lot more empowering than you think it would be. The challenge mode, on the other hand, is not as fun in the end. While being able to pick from practically every troop and cause complete mayhem is fun for a while, after a few games, it just becomes a lot of the same thing. Now, that’s not to say these modes aren’t worth anything, because if you could actually have a friend around to experience it with you, you could have plenty of fun. However, if you’re alone (happens to the best of us), the fun times will be few and far between.

If I had to use one word to sum up my feelings for Swords and Soldiers II, it’d probably be whatever word classifies being above “meh”. It’s not at all bad. Whenever I had fun with this title, I really did have lots of fun, but when the missions drag on and slowly take away from the game’s charm, you really start to feel like you’re missing out on something. The game does just enough to provide a good experience, but that’s just it. Once you finish a mission, there’s no need to come back. After you play the multiplayer for a bit, there’s no need to come back. It’s a shame really, because it feels like this game is right on the verge of being excellent in my book, but hey, what we have it a pretty alright game that’d I wager is worth the price. So in the end, I’d give Swords and Soldiers II my approval and will fondly remember the ridiculous amount of puns this game had to offer, and that’s okay.

A ‘Neutral’ rating means that, at the end of the day, the game in question succeeded at what it was trying to do, but not without some major flaws. If the concept and style appeal to you, you’ll likely still enjoy it, but it’s not as focused as it could be.

Even though I may have sounded a bit negative in some portions of this review, frankly, I just told it how it is. Swords & Soldiers II is a simple game with a simple premise, but I’d be lying if I said I didn’t have fun playing through this title. It has just enough to provide a little bit of fun that, although you won’t be coming back to, is memorable enough to at least warrant one play through. Also, did I mention all the puns?