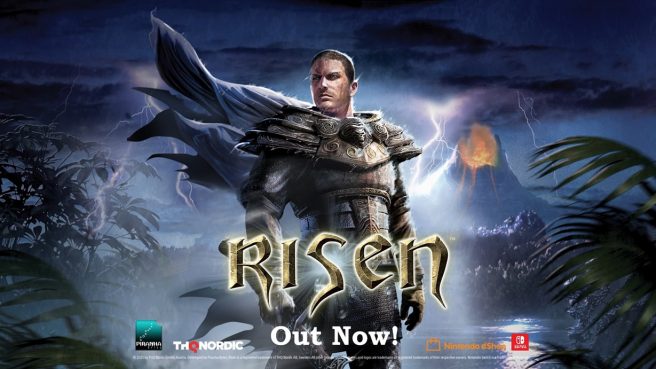 THQ Nordic published Risen on Switch today, and we now have a look at the game on Nintendo’s console via a new trailer. This marks the first time the title is appearing on a Nintendo system.

Delve into the gritty and atmospheric world of Risen, where every action has a consequence. Master the sword, learn the art of staff fighting, or become a powerful mage, forging your path across a land filled with mysterious earthquakes, fearsome monsters, and unimaginable treasures.

– A mysterious volcanic island: The island of Faranga’s heavy tremors bode ill for its inhabitants. Ancient temples have risen from the ground, bringing with them bizarre creatures that terrorize the area. Fear and panic are spreading throughout the population.
– The end of all hope? A powerful group calling themselves “The Inquisitors” have made it their quest to put an end to these events. They send an expedition to Faranga, but a ferocious storm takes hold of the ship and destroys it at sea.
– A hero will come: Miraculously, you survive the shipwreck and are stranded on the volcanic island alone. You find yourself caught amidst rebellion, tyranny, and mystic rituals. It is up to you to decide which way the pendulum of fate will swing.

Risen can be purchased physically or digitally on Switch.