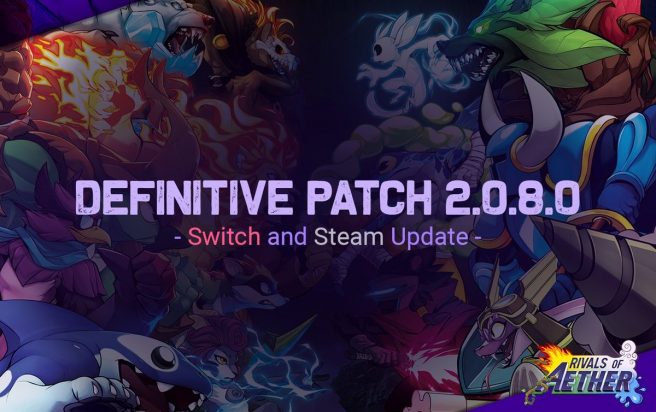 A new 2.0.8.0 update for Rivals of Aether has just gone live on Switch. Along with the Diamond Grove crossover stage skin, it also includes a ton of balance adjustments for the fighter’s various characters.

Below are the full patch notes for Rivals of Aether update 2.0.8.0:

Zetterburn’s Up Air is being adjusted to match his visuals and reach lower at the end which also improves the attack as a landing aerial. Forward Air’s hitbox has also been adjusted to better match the swing’s visuals.

Bubbles are getting a minor nerf allowing players to SDI out of them more effectively while Back Air is getting an adjustment to have weaker base knockback and higher scaling so it KOs slightly later.

Kragg’s Up Tilt is going to be more reliable. The angle is being adjusted to combo better while also not being techable. He is also getting a quality of life fix to Up Special so now you don’t have to know if the pillar reached you or not when hit out of the vertical stall.

Forsburn has his hurtboxes adjusted so you can’t attack his cape on multiple attacks. His Down Strong has been adjusted to have more hitpause and we are bumping up its knockback to compensate since it will be more consistent to DI it. Forward Strong is getting a buff to be more reliable and also have more knockback scaling.

Down Tilt hitbox now matches the art better and Up Strong is being fixed so its multihits can no longer be SDI’ed.

Menace finally got through to Trevor and Dan and they crumbled and made an adjustment to make Etalus’ Forward Strong more reliable.

Charged Flame hit lockout was removed because it was preventing cool charged flame into aerials while not affecting kill confirms with it. Forward Tilt is no longer so disjointed since Ori is not meant to have good disjoint. Dash Attack startup and knockback has been adjusted so its not as spammable into itself because Dan played against 3 Ori players in a row on ranked earlier this year and couldn’t handle it anymore.

Jab 2 has been adjusted to not whiff when Jab 1 lands very close. Up Strong is being adjusted to reduce the Up Strong fishing that we see late game especially with DACUS. If you have ever played against a Ranno online, then hopefully you understand.

Clairen Down Strong is getting a little bit of love as a KO option. Now the angle is consistent and the scaling is slightly higher so both the Clairen and her opponent can react to the attack better. Forward Strong is getting a consistent angle on aerial and grounded opponents which will make it just as strong of a KO option during a combo as it is raw on the ground.

We found out that people would like to at least try to DI’s Sylvanos’ Down Strong.

Missiles are cool but it can be annoying when they are used to combo break and the opponent has already forgot about them. The new offscreen indicators should help the opponent be more aware of their positions.  Up Tilt with heat has become a nasty kill confirm for Elliana and while we still want it to be strong, we are adding recovery frames so it’s not as guaranteed. Neutral Air and Forward Air are having their angles flipped because Neutral Air has outshined Forward Air in nearly all Elliana scenarios. Now we hope that both can see usage in high level play. Neutral Special early hit was adjusted to combo into the rocket fist more reliably.

Shovel Knight Down Tilt was adjusted to not whiff inside him when it looks like it should hit. Down Air was adjusted so the spike has a sweet spot and sour spot since the late spike can feel cheesy to be caught with late.

Rivals of Aether update 2.0.8.0 can be downloaded now on Switch.