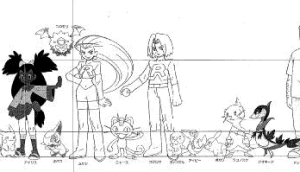 The image above is supposedly beta art from the new Pokemon anime, but it’s legitamacy hasn’t been confirmed 100%. In the picture, a new bat Pokemon called Koromori (besides Jessie), the evolution of Tsutaja and Mijumaru, and a new Pokemon next to Iris are shown. That’s the only information we have now, though if it’s true, these Pokemon will probably be showing up in Black/White.