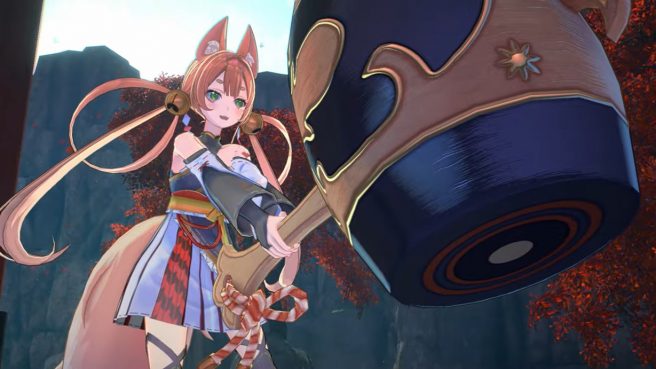 A third character trailer is now in for Samurai Maiden, and we have a new look at Komimi.

Miyu Tomita voices Komimi, who is a master of onmyoji magic. It’s said that she “wields a colossal hammer with ease, encasing it in an icy air that sends shivers down her enemies’ spines.” D3Publisher adds: “Anyone wishing to brush Komimi’s tail must obtain her express permission first.”

Further details about Samurai Maiden can be found in the following overview:

Beneath the cherry blossom trees in stunning Japan, a young woman becomes…a samurai?? Experience fast-paced action in the Sengoku period as this everyday girl slays demons and slashes her way through the chaos!

A temple in flames. Swirls of black smoke rise high into the sky. The angry shouts of soldiers can be heard all around. Before you stands a bearded old man… Wait, is that Nobunaga Oda?!

And when things get tough, activate the Devoted Heart technique to have samurai and ninja lock lips to enhance their abilities! There are so many exhilarating, epic battles to take on! Slay the Demon Lord of the Sengoku period and forge everlasting bonds with your ninja friends!

You can find the trailer for Komimi in Samurai Maiden below.

Samurai Maiden is slated for December 1, 2022 on Switch in Japan and December 8 in the west. We have previous trailers for Iyo here and Hagane here.