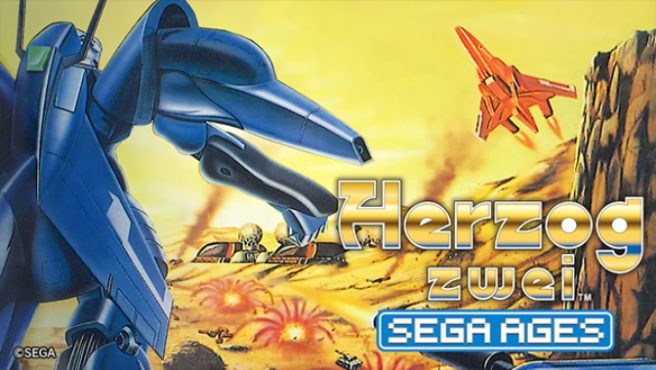 The official website for SEGA Ages Herzog Zwei has opened, providing details and screenshots for the upcoming Switch release.

– The main mode, which is a reproduction of the Mega Drive version
– Play either against the computer in a one-player game, or with a friend in a two-player game
– Players will start from their base camp, placed on the top or bottom of the battlefield
– While producing weapons at your base, transporting weapons, and fighting off enemies one after the other, occupy the neutral bases along the way to expand your territory
– The first player to reduce the enemy’s base camp to zero endurance is the winner
– Can play as the Revolutionary Army or Government Army on eight different maps and four different difficulty settings
– SEGA Ages version has an information display that’s been added to the left and right sides of the screen
– Detailed information such as occupied bases, mech details, and selected weapons and commands will automatically display according to the situation
– Turn on “Helper” mode to modify your “base camp endurance,” “mech endurance,” and “weapons development budget”

– Through the network, you can match up with and battle against random players
– Network battles are fought with the same split-screen display as regular two-player battles
– “Helper” feature is not supported in network battles

– All-purpose mech that can transform between infantry soldier and attack jet
– Outside of direct combat, it mainly transports weapons to the front line
– If its fuel runs out, it will explode, but it will revive at the base camp
– Infantry Soldier: foot soldier attacks with a hand-held cannon during ground battles; moves more slowly than the attack jet, but uses less energy
– Attack Jet: fighter showcases its strength during air battles, and its high attack power that matches its high-speed mobility are highly acclaimed; depletes energy three times as fast as the infantry soldier; during air transport, it depletes energy an additional three times as much

– Save and watch replays
– In the original game, you saved your progress with a password and without a traditional save, but now that password is saved automatically, so there is no need to save it yourself
– The screen settings can be changed to the CRT-like “Vintage” mode, “Dot by Dot” mode, and more

SEGA Ages Herzog Zwei will be released “soon” on Switch via the eShop.