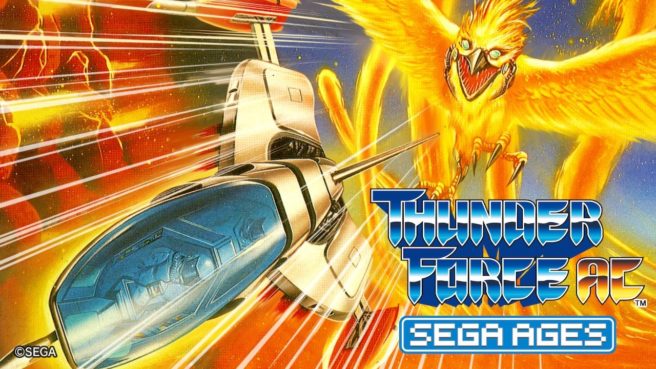 – Faithfully ported from the original arcade version of Thunder Force AC
– Arcade Mode is the main mode of the SEGA Ages version
– Based on the SEGA Saturn version of Thunder Force III, but with reconstructed game balance
– Some stages have been changed to new stages different from Thunder Force III
– Four playable ships, which will unlock based on your gameplay results
– By setting the version to “New” in the options, the mode will play based on the overseas version, increasing the performance of your ship

– Choose from four ships
– The ship can be selected from the menu screen
– This is possible in both Arcade Mode and Kids Mode
– Fire Leo-03 Styx: highly mobile fighter developed by the efforts of the Galaxy Federation; small but its firepower rivals that of a large battleship; only ship you can choose at first; weapons include Tin Shot (Sever), Back Fire (Lancer), Wave, Fire, and Hunter—and can equip the Claw and Shield
– Fire Leo-03MP Styx Mass Product: Mass Product-type Styx that appears in Thunder Force IV; technical ship with enhanced backfire when changing speed, which can be used to attack and obtain a high score; by adding a button setting, you can use a “Roll” attack when the Claw is equipped
– Fire Leo-04 Rynex: main ship from Thunder Force IV, and the next-generation of super highly efficient fighters; weapons include Twin Shot (Blade), Back Shot (Rail Gun), Snake, Free Way, and Hunter—and can equip the Claw and Shield
– Fire Leo-o4 Rynex (Equipped with Thunder Sword): Rynex equipped with the ultimate weapon, which appears in the latter half of the Thunder Force IV story; along with the Rynex equipment, you can fire the “Thunder Sword” (the ultimate weapon) by equipping the Thunder Claw

– Save and watch replays
– Watch replays of advanced players from the leaderboards
– Sound has been converted to stereo (though some is monaural)
– HD Rumble feature can be turned on or off in the settings
– The screen settings can also be changed to the CRT-like “Vintage” mode, arcade atmosphere-like “Cabinet” mode, and more

SEGA Ages Thunder Force AC will be out “soon” on the Japanese eShop for 999 yen.