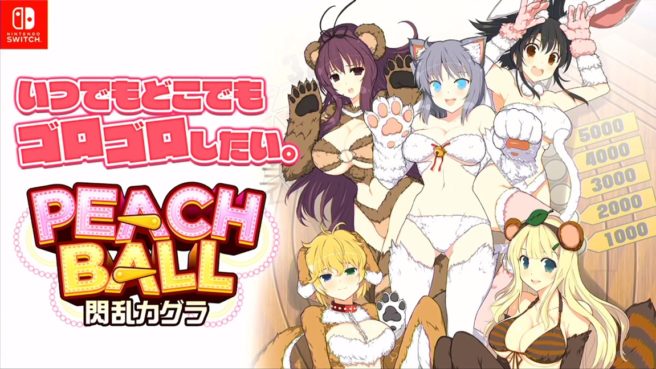 In a recent issue of Famitsu, the Japanese magazine spoke with Senran Kagura producer Takaki Kenichiro about the upcoming Peach Ball game for Switch. The somewhat awkward discussion tackled where the idea for the project started, how HD Rumble is being used, and what to expect from the title overall.

If you’re interested in learning more about Senran Kagura: Peach Ball, continue on below.. We’ve prepared a full translation of the interview.

First, can you tell us a little about the idea for the game?

I’ve always loved pinball and I wanted at some point to make a game where pinball and big boobs are fused together. When the Switch came out and I saw the HD Rumble feature of the Joy-Con, I knew it was the perfect chance. When I thought about their ability to let the player feel things that are going on in the game, my mind immediately went to a pinball table with a woman on top. From there the idea was finalized and we were able to share the announcement with everyone.

What exact sensations can you feel in the game?

Recreating the pliancy of a woman’s body is difficult, but with the HD Rumble we can do things we couldn’t before, like replicate the sensations of touching and being touched. This is something we could only hope to do this time around.

I’m sure players are looking forward to it. (Laughs) What sort of pinball experience should they expect?

We’re focusing on making a pinball game that is easy to understand and play, but of course there’s still the sexy element of the Senran Kagura series. In this game there’s also a new bonus stage called ‘Sexy Challenge’. This is a mode that players need to clear mission objectives and collects points in order to unlock. In the ‘Sexy Challenge’ stage, when the player hits the woman with the ball she can be splashed with water and stuff. If the player is skilled enough, eventually the woman’s clothes will come off. (Laughs)

Seems like you’re really catering to your fan’s needs! (Laughs)

We’ve added a lot to the ‘Sexy Challenge’ mode including ten different variants and women that move in cute ways, as well as other new features. Plus, when the player clears the ‘Sexy Challenge’ mode they will unlock ‘Super Sexy Challenge’. In this stage the woman’s boobs and bum are very close to the flippers, so hitting them with the ball is much easier. While the player can fully enjoy the HD Rumble feature here, there is also the chance to really push up their score, meaning the stage isn’t just to enjoy watching, but also a key part of the game.

I saw that the HD Rumble is not only used in the pinball mode, but in the long-established Dressing Room mode too.

Yes, just like the fans wanted, we’ve added the rumble function in that mode too, where you can get up close and personal with the characters. In the Dressing Room you can not only interact with the characters but also change their hairstyles, clothes. You can also access the Diorama Mode here too. There have been no major chances on this front, but just as with Senran Kagura Reflexions, the base stage and outfit for the character can be changed to allow the player to see different responses. As well as this, the surface of the board and design of the pinball table can also be changed. I think with these variations and the change of mood that comes with them, players won’t tire of challenging the high scores over and over.

What types of different table designs are there in the game?

Within the base two styles of ‘Light’ and ‘Dark’ there are lots of variations. In the light version of Peach Land the board transforms into a bright and colourful amusement park, while the dark variation has much more of a bewitching, elegant feel. The play style varies a lot for each one and the ‘Super Sexy Challenge’ also has different BGM. The song on the light side, Flying Bird, is performed by Hitomi Harada and the dark variation song, Hot Spring, is performed by Yumi Hara. So the player not only gets to have fun hitting ladies boobs and bums with a pinball, but also gets to listen to some great music. Just listening to the lyrics alone gives the feeling of being transported somewhere else, so I’m looking forward to hearing the music too.

It looks like those two songs are going to have a lot of fans. Talking more of the characters, why are all the women in this game dressed as animals?

The essence of pinball as a game is to simply hit something with the ball. But then I thought just hitting the characters of the Senran Kagura series with a pinball might feel a little bit too rough and cruel… So I was trying to think of a way around this when I saw my cat playing with a ball and I realised something. When it’s the animal and the ball playing together, isn’t there this natural atmosphere of fun? And so that’s how all the woman ended up dressed as animals. (Laughs)

I see… (laughs). It may end up being criticized anyway, but what age group is the audience for this game?

I think it has to come under the D rating (17 years and older). If we instead marketed it as C (15 years and over) I think we would be heavily criticized and have to change it anyway.

This time around players can pick up the limited edition ‘W Pack’, which comes bundled with the ‘Ninja Massage’ part of the game. Why did you decide to include this?

The Senran Kagura series was originally developed as an action game, and while this was the main component of the game, many players also enjoyed the Ninja Massage (JP lit. Shinobi Reflexology) mode. Even though it was much loved, it was only ever a downloadable extra and there were many people asking us to package it in with the main game. Because of that, this time all of the characters (Including the additional Flying Bird, Hot spring, Purple, Ryona and Yomi characters) are included with all new ‘VIP Massage’, ‘Marvellous Massage’ and ‘Valentine Massage’ courses, all three of which come packaged as the ‘Fabulous 3 Massage Set’. This is included with the game. In these new courses, the player can use things like foot rollers and suction pads to give massages to the women while appreciating their sexy bodies. Coincidentally, we are also planning to release the ‘Fabulous 3 Massage Set’ as separate downloadable content, so there’s no need for those who prefer downloads to go out of their way to buy the limited physical package.

Isn’t there also extra DLC for those who pick up the special edition?

Ah, you mean the Nyuu Nyuu Special. This includes the ‘Show Girls from a Mysterious Country’ and the ‘Girls from the Secret Elegant Isles’ (5 in all). It also includes the Diorama motion ‘Temptation’ and ‘Bewitching’ sets. Finally it also comes with the ‘Girls’ Bra Ball set’, which can be downloaded after release.

So even if you pick up the standard edition, there is still a chance to get hold of the DLC. What exactly is the ‘Girls’ Bra Ball’ set?

It’s an item that changes the appearance of the pinball to the design of women’s underwear. We’ve developed light and dark versions, and because the weight varies depending on which one you choose, so will the sensations the player feels through the HD Rumble. I think this change of design alone gives the game a whole new atmosphere.

I can’t wait to see the finished product!

… Thanks to all of the fans that have supported it, the Senran Kagura series is now approaching its seventh anniversary. From now on, I’d like to keep fighting not only to include all the fan service elements but also to maintain the fun factor of the games. Hopefully we can continue on to our tenth anniversary. In Peach Ball the main focus is pinball but there are also plenty of opportunities to get along with the girls. I hope the fans are all looking forward to it!