Posted on August 2, 2021 by Brian(@NE_Brian) in Screenshots, Switch 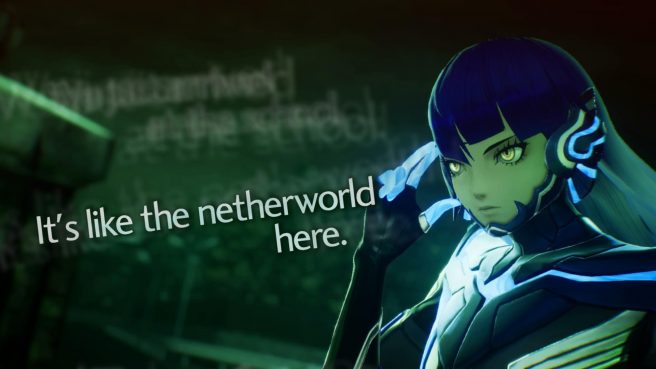 Atlus has shared a new batch of details, screenshots, and art for Shin Megami Tensei V. The images highlight the game’s main cast of characters, demons, and more.

Godhood Awaits. Go and Claim it.

After the tunnel collapsing incident, the protagonist wanders into a dilapidated Tokyo swarming with demons: a wasteland called Da’at. He fuses with a mysterious man, Aogami, to become the condemned being “Nahobino,” and finds new powers to fight demons.

However, it wasn’t only the protagonist who wandered into Da’at after the collapsing incident. His classmates Yuzuru Atsuta and Ichiro Dazai also have close encounters with demons, but somehow manage to reunite with the protagonist, and the three are able to return to Tokyo.

What awaits the three upon returning is the presence of another classmate, Tao Isonokami. According to her, two versions Tokyo exist–the one they live in, and Da’at. The mythical demons in Da’at have spawned from darkness, and have their sights set on humans and Tokyo itself. She reveals she is a member of the Japanese branch of Bethel, an organization that has sworn to fight the demons.

Right when it seems their peaceful lives as students have returned, an emergency notice comes in from Bethel. Demons have appeared all throughout Tokyo. The protagonist and his friends head out to protect people in the affected areas. At the same time, a wave of demons has begun to swarm into the protagonist’s school, Jouin High School.  Their classmate, Sahori Itsukishima, is in danger–.

The protagonist’s classmate. A third-year student who is a member of the lacrosse club. Caring and kind-hearted, she’s had a sixth sense since she was little. She assists Bethel’s Japanese branch and supports the protagonists they when join Bethel.

A friend of the protagonist. Responsible, capable, and assertive, he is a principled and upright young man, and fights alongside Bethel in a provisional unit to protect his sister Miyazu. By wandering into Da’at alongside the protagonist, he obtains further abilities, and newly swears to fight to protect the peace of Tokyo.

The protagonist’s classmate. A cheerful guy, though he can be gauche at times.
He struggles with his grades, and most other students just see him as a loser.
His hobbies include livestreaming, but he, too, becomes involved in the tunnel collapsing incident while recording in the Takanawa Tunnel and wanders into Da’at. He embraces Bethel’s cooperation request and swears to fight the demons, hoping to prove his worth for a noble cause.

Yuzuru’s little sister and only living family member. Shy and reserved, she has a delicate constitution, and she’s often seen visiting the nurse’s office. When Jouin High School is assaulted by demons, she, too, is caught up in the chaos.

Japan’s prime minister and Bethel’s main representative of the Japanese branch. Calm, collected, and strategic, he offers the demon summoning program to Ichiro and friends, asking them to assist Bethel.

While exploring Da’at, you will encounter over 200 types of demons.
Aside from the classics, several new demons will appear, designed by character designer Masayuki Doi.

This game features the classic command-based press turn battle system. By striking your enemies’ weaknesses, you can increase your turns and get the upper hand. However, enemies can also do the same, so beware! While simple, this battle system rewards strategic thought. With new skills added for the game, players can enjoy an even wider range of strategies.

Enemies can strike your weakness, turning the tide in their favor.

During battle, your actions will gradually fill up the “Magatsuhi Gauge.” Once this becomes full, you can activate special moves called “Magatsuhi Skills.” Aside from releasing powerful attacks, they can also be used to heal and support you. Understanding when to use these is key.

Beware, as enemies can also collect Magatsuhi and activate powerful moves the next turn.

Skills with “+” potentials are more powerful!

“-” potentials means less damage, but you can strike enemy weaknesses.

Demons all carry affinities and weaknesses. Skills that match their demons’ affinities become that much more powerful, marked with a “+” skill potentials. Conversely, inheriting a skill that matches a demon’s natural weakness leads to a “-” skill potential, making it less powerful. Strategically deciding between the damage you can deal vs the enemy weaknesses you can strike is key. Keep this in mind when creating your party, so you can choose demons that best fit your personal playstyle.