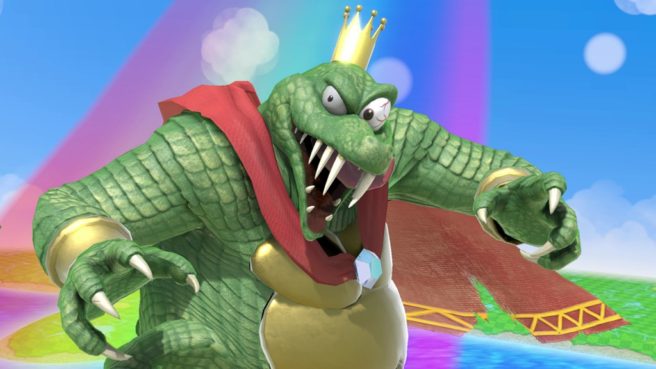 Nintendo has sent out a press release recapping all of the details from today’s Smash Bros. Ultimate Direct. Find the full announcement below.

A legendary vampire hunter and a fan-favorite villain are joining the sprawling cast of the Super Smash Bros. Ultimate game. In a Nintendo Direct video presentation entirely focused on the Nintendo Switch exclusive, it was revealed that Simon Belmont from the Castlevania series and King K. Rool, the main antagonist from the original Donkey Kong Country games, are both joining the game as playable fighters. In addition, the Nintendo Direct also shared additional information on Echo fighters, new stages, new modes and one of the most impressive collections of music ever in a single game, with more than 900 music tracks and 28 hours of music. Super Smash Bros. Ultimate launches exclusively for Nintendo Switch on Dec. 7.

“Super Smash Bros. Ultimate is one of the biggest games Nintendo has ever released,” said Doug Bowser, Nintendo of America’s Senior Vice President of Sales and Marketing. “Between all the iconic fighters, stages and music, it’s the largest video game crossover ever produced – and nothing short of a Nintendo fan’s dream come true.”

To view the Nintendo Direct video in its entirety, visit https://www.nintendo.com/nintendo-direct. Some of the highlights revealed in the video include: