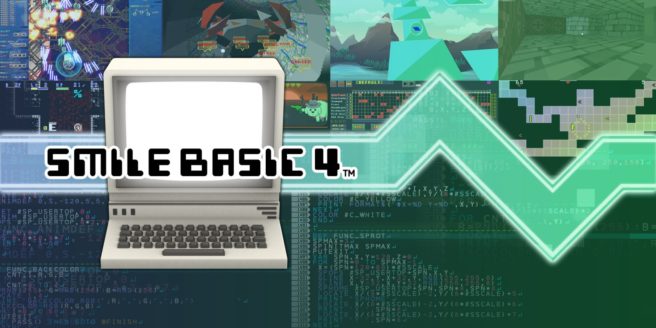 The programming app SmileBasic 4 has been updated on Switch, bringing it to version 4.4.0. It includes a revised English localization, new features, improvements, and bug fixes.

– We have revised the English localization based on user feedback. We appreciate the feedback from many of you.

– See the help and reference for each command for more details.

Improvements of the Menu and Others

– The project list view has been improved to be faster.
– A warning message is now displayed when an unsaved program is found at the start of the Beginner’s Guide.

The following bug has been fixed:

Significance: High
– Freeze under certain conditions and procedures when copying a file to another project.

– Coordinates set by MOUSE command cannot be retrieved by TOUCH.
– If TSTOP is executed after TANIM is executed, the value returned by TCHK will be abnormal.
– When a sprite using SPCOL is SPSET, the previous SPCOL size information is left behind.
– When an Int is INC or DEC, the calculation result is different from + (addition) when the calculation result exceeds the maximum or minimum value of the Int.
– INKEY$(1) returns a value including the controller input.
– When using a lot of WAVSET for multiple voice numbers, the waveforms of other tone numbers might be replaced by the specified tone number’s waveform.
– If either of starting point X or Y is negative in TLOAD, it is not applied to the display.

SmileBasic 4 is available for Switch via the eShop.