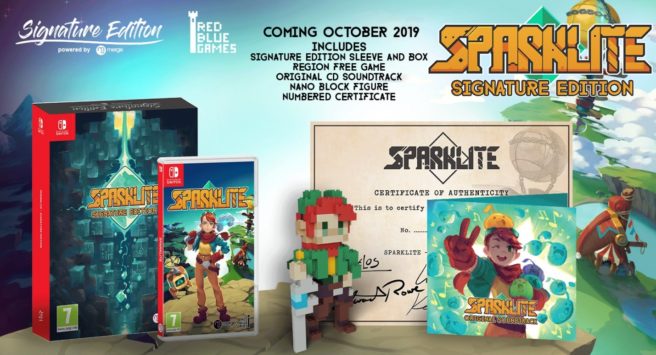 Alongside a physical copy, Sparklite will be getting a unique Signature Edition. Pre-orders go live on June 28 and will include:

Here’s some additional information about Sparklite:

Everything in the world of Geodia is tied together by Sparklite… it’s the life force of the planet, and the inhabitants have learned how to channel it for their own gain. The blue, glowing ore can be harnessed providing a low-level, rechargeable power source, or it can be consumed for a huge surge of power with grave consequences. Geodia’s self-titled “Baron” has devised a plot to mine the world’s Sparklite core to meet his own ends. Mining Sparklite in large quantities, the Baron repurposes the ore to fuel his powerful war machines, but the pollution from the consumed Sparklite is corrupting the world. Animals have turned into violent monsters, and the environment is rotting away.

The stricken land of Geodia has a natural defense in its Sparklite core. Periodically, the core causes a Disruption which rearranges the world, setting back the Baron’s efforts. Our heroine, Ada, must stop the Baron before he can obtain the core and gain the power to create a new world in which he has ultimate power. A plucky mechanic, Ada will need to use her cunning and skills to defeat the Baron’s henchmen across five distinct zones. Ada will have to work with Geodia’s weird and wonderful inhabitants if she’s to face the Baron and put paid to his deadly plans before it’s too late.