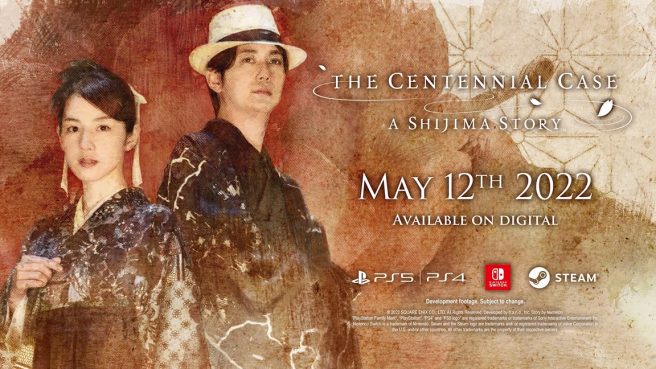 Publisher Square Enix and developer h.a.n.d. will be releasing The Centennial Case: A Shijima Story on Switch later this year, the company just announced. It’s due out on May 12, 2022.

Directed by Koichiro Ito (Metal Gear Solid V) and produced by Junichi Ehara (NieR:Automata), The Centennial Case: A Shijima Story centers around the ill-fated Shijima family, who have experienced a chain of inexplicable deaths in their family over the past century. Players will take on the role of mystery novelist, Haruka Kagami and use their powers of deductions to uncover the truth behind four murder cases that have taken place in the Shijima household over the last one hundred years. Take on this accessible mystery story, uncover the truth of the case and reveal the culprit!

Yasuhito Tachibana, producer of Netflix’s ‘The Naked Director’ serves as Cinematographer and Scenario Director on The Centennial Case: A Shijima Story, taking visual storytelling to a new level with high-quality cinematography and thrilling live-action gameplay. Players will be immersed into an authentically traditional Japanese story where they will transcend time across different eras of Japan while collecting information scattered throughout each era to uncover the truth behind the ill-fated Shijima family and solve an age-old mystery.

The Centennial Case: A Shijima Story features compelling performances from Nanami Sakuraba as the games’ protagonist, Haruka Kagami and Yuta Hiraoka as Eiji Shijima, the second son of the Shijima family who returns home to help unravel the mystery behind his ill-fated family. A cast of talented Japanese actors bring this enigmatic Japanese adventure to life, depicting an array of characters throughout each period setting.

“This is a mystery game that we’ve poured our efforts into wholeheartedly, following extensive discussion between the director, Koichiro Ito – who has created a great many adventure games – and Yasuhito Tachibana, of Netflix’s The Naked Director, on the topic of “a live action game, for gamers”. An intricately woven story, a gameplay experience where you use your powers of reasoning to uncover the culprit, and the massive secret that threads together multiple murder cases that occur at different points in time… We’ve entered the last stage of development, with the aim to make it a mystery game that everyone can enjoy. I hope you’ll look forward to the game!” said Producer Junichi Ehara.

Watch a trailer for The Centennial Case: A Shijima Story below.