Star Wars: Knights of the Old Republic II is currently impossible to finish on Switch due to game-breaking bug 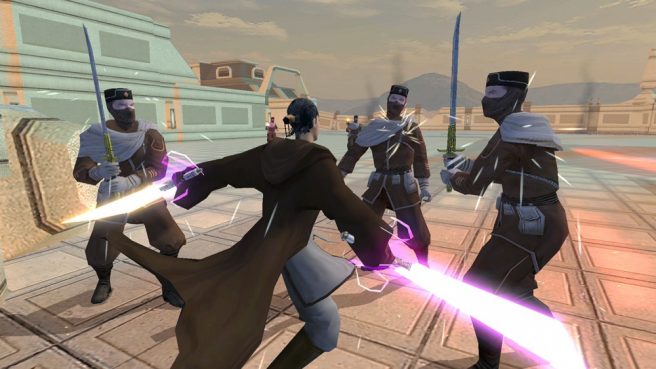 Star Wars: Knights of the Old Republic II: The Sith Lords players have come across a game-breaking bug in the newly-released Switch version. Because of it, there’s no way to progress all the way to the finish line.

Aspyr, the company that brought Star Wars: Knights of the Old Republic II: The Sith Lords to Switch, confirmed the issue on Twitter. When one fan asked if there is no way to complete the title currently, Aspyr acknowledged that this is the case. However, a patch is planned and will be distributed “as soon as possible.”

Yes, we are aware and our dev team is working on delivering the patch as soon as possible. We apologize for the inconvenience and appreciate your patience in the meantime!

As for the actual glitch, the game seems to crash following the “Basilisk Crash” cutscene, which happens when players arrive on Onderon. Unfortunately, it pops up about halfway through the game. And once players reach that point, there’s nothing they can do. Everyone will simply need to wait for an update if they’d like to complete the game.

Glitches are nothing new to games, and patches are often released to take care of issues. However, we haven’t really seen something like this too often with Switch titles. Also, this is something that was previously present in the initial debut in 2004 / 2005, so it’s surprising to see that it was carried over rather than fixed prior to release.

Star Wars: Knights of the Old Republic II is currently available on the Switch eShop. The title launched as an eShop download on June 8.