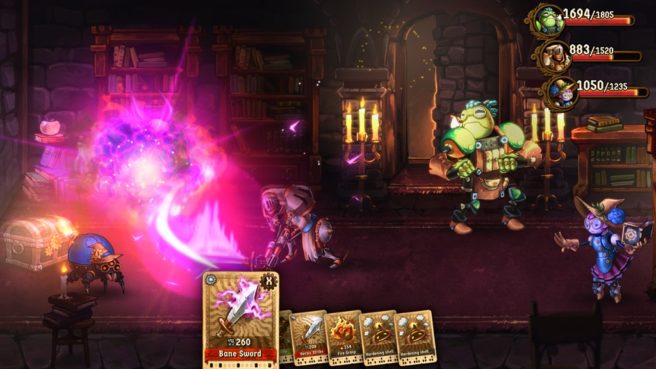 Image & Form has revealed SteamWorld Quest: Hand of Gilgamech, the next entry in the SteamWorld franchise. It’s a “team-based card collecting role-playing game set to an epic story around what it means to be a hero.” Fans can look forward to “billions of potential decks to build, tongue-in-cheek humor, a storybook-inspired art style and memorable characters”.

SteamWorld Quest is the roleplaying card game you’ve been waiting for! Lead a party of aspiring heroes through a beautifully hand-drawn world and intense battles using only your wits and a handful of cards. Take on whatever threat comes your way by crafting your own deck choosing from over 100 unique punch-cards!

What awaits you is a luscious treasure chest filled with gold, dragons, vivid worlds, magic, knights in shining armor as well as XP, turn-based battles and all that good RPG stuff! The game’s humorous mix of traditional fantasy and steampunk robots makes for an unforgettable experience with lots of laughs.

SteamWorld Quest: Hand of Gilgamech launches first on Switch in 2019.