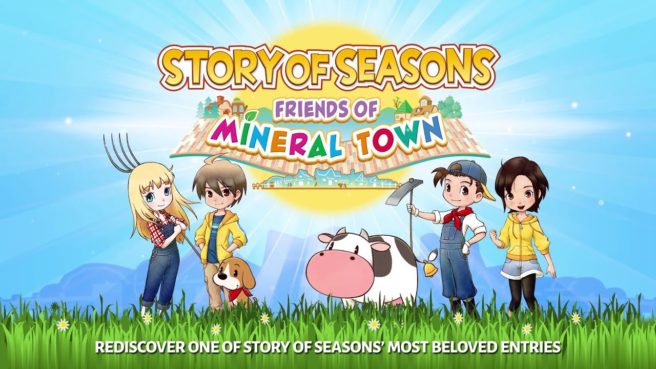 Story of Seasons: Friends of Mineral Town has been out on Switch in Japan since October. It’s taken a bit of time for the western release, but we’re finally getting the game in North America and Europe this summer. XSEED has gone back to the drawing board by coming up with a new English localization and implementing some changes from the Japanese edition.

XSEED revealed in a blog post that changes have been made to the “Best Friends” system in which players are able to form a lifelong partnership with a character of the same sex. For the upcoming English version, it’ll simply be called “marriage”. Additionally, “the relationship between same-sex couples will be given identical treatment to opposite-sex couples.” We also now know that the “heart” icon”, which indicates a marriage candidate’s romantic affinity for the player, “will display for all marriage candidates from the start of the game, where in the Japanese release it will only display for same-sex candidates after you confess and start dating.”

Here are a few notable excerpts from XSEED’s blog, which addresses character name changes as well:

When we learned that the next title in the Story of Seasons series would be a remake, we immediately started considering our approach to the localization. While we were concerned about messing with fans’ nostalgia for the world and characters of Mineral Town, we realized that we needed to approach the translation as a completely new project, without referencing the original English localization at all.

This will lead to some inevitable changes for veteran farmers – the most immediately noticeable to returning players is that some character names will be different. This was a point that we agonized over because we know just how important character names are to ardent fans of the series – I wrote a localization blog about Trio of Towns detailing the decision to return the name of the character “Lisette,” which had been changed to “Carolina” early in the translation process. But, ultimately, we decided that we had to be faithful to the Japanese names.

My role in Friends of Mineral Town is a project manager overseeing an excellent team of two translators, two editors, and one amazing proofreader. I never played the original release in English, but as the localized text rolled in, I read through it and thought a lot about how much language has changed in 16 years. The core of the characters and the world will be familiar to players, yet the way characters speak will no doubt be different and more contemporary in subtle ways. Quite frankly speaking, I am nervous about how a completely new translation of a beloved work will be received – it’s a project unlike anything we’ve been involved in before – yet I believe strongly that the work of our excellent localization team will stand on its own.

One major change between both the original version and the remake, as well as between our version and the Japanese version, concerns what has been called the “Best Friends” system in the Japanese release, where the player character can form a lifelong partnership with a character of the same sex. In our version, this will just be called “marriage,” and the relationship between same-sex couples will be given identical treatment to opposite-sex couples. This has been a very long time coming in the Story of Seasons series, and the producer has been supportive of our decision from very early in development. One minor but important change for the North American and European releases of Friends of Mineral Town is that the “heart icon” indicating a marriage candidate’s romantic affinity for the player will display for all marriage candidates from the start of the game, where in the Japanese release it will only display for same-sex candidates after you confess and start dating.

Story of Seasons: Friends of Mineral Town has a confirmed release date of July 10 in Europe. As for North America, XSEED is only committing to sometime this summer.