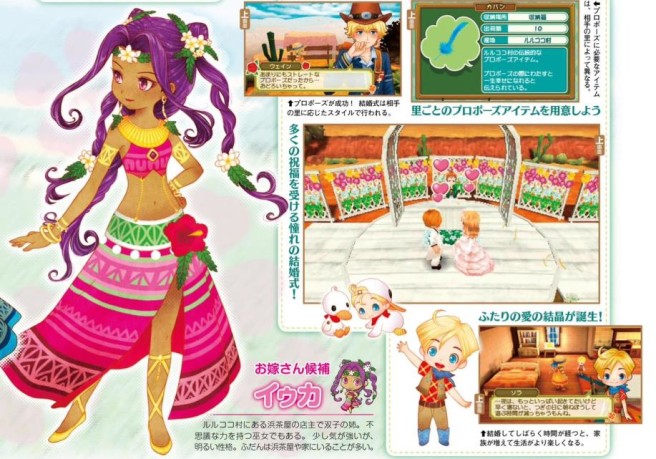 This week’s issue of Famitsu shares another update on Story of Seasons: Good Friends of Three Villages. The magazine covers relationships, characters, multiplayer, and even pets.

Rudeus is the groom candidate in Lulucoco Village, is skillful in creating farm circles and renovating houses, and gets along very with the children in town. This village also has the twins Siuca and Iuca as bride candidates who are in charge of a tea house. They’re also Ludus’ childhood friend.

Players can go about forming relationships in Story of Seasons: Good Friends of Three Villages by talking to characters daily and giving them their favorite pendants. You can also give pendants as a way to confess to your girlfriend/boyfriend. However, if relations are low they won’t accept your confession. Reverse confessions are back under certain requirements. Additionally, it’s still possible to have children after getting married, though we don’t yet know what the limit on this is.

Famitsu indicates that the different areas in the game have different proposal items. For example, the Blue Feather is only in Lulucoco.

Lulucoco houses a couple that has already been married. Zahaw is a fisherman and Karira owns a foodstuff shop. Sharuk (their son) wants to be like his father while Alma (daughter) likes playing and mischief.

Multiplayer is one of the features in Story of Seasons: Good Friends of Three Villages, and both online and local play are supported. Four players can gather together at a special island. This island has a mysterious temple, and if you present an item, it will turn into another item.

Marvelous is planning more variety with pets in Story of Seasons: Good Friends of Three Villages. This includes more variation with the dog and cat breeds. The lineup of dog breeds consists of Husky, Shiba, Bernese, Doberman, Toy Poodle, Dachshund, Chihuahua, Beagle, and more. As for cats, the lineup is Maine Coon, Scotty, Himalayan, Calico, Siamese, Tabby, American Shorthair, Bengal, and more. A Capybara can also be had as a pet.