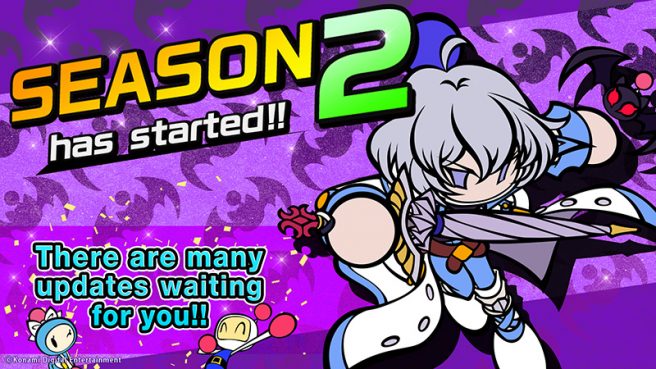 The new season will also include Event Battle, though that’ll be happening at a later date. Konami will be sharing more information about this later on.

As for Castlevania’s Soma Cruz, that’s immediately available in Super Bomberman R Online. All of the relevant information about that and Season 2 can be found below.


Soma Cruz from the Castlevania series has joined SBRO! You can find him in the Character menu within the in-game Shop.

・Special Ability ”Power of Dominance”: Soma Cruz seals and temporarily copies the special abilities of characters who come into contact with his bats.

Renewal of the Battle Pass! New rewards based on the Castlevania series are coming up!

The Gold Pass (Paid) and Silver Pass (Free) have been renewed! You can earn items and Bomber Coins as rewards for both as you progress through the ranks.

Gather outfits, accessories, and taunts inspired by the Castlevania series as rewards through the new Gold Pass!

*From this season, Bomber Coins can also be earned through the Silver Pass.

■Later this Season: Event Battle!
The Event Battle is a new feature that allows players to enjoy a variety of in-game special events! The content and release dates of these events will be announced at a later date so we hope you will look forward to them!

■The following changes have been made to improve players’ in-game experience.