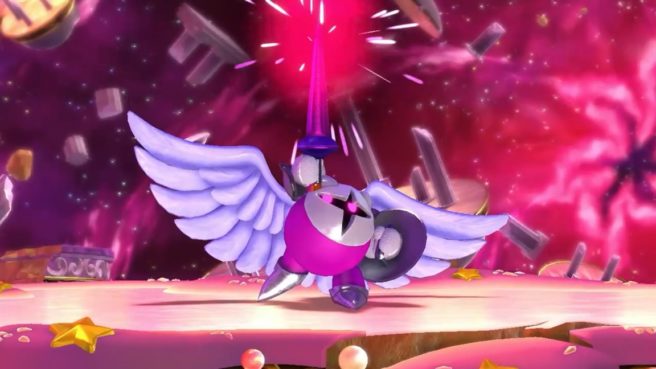 Super Kirby Clash is almost one year old. To celebrate, Nintendo and HAL Laboratory have shared more on Aeon Hero, one of the game’s various characters.

If you’ve played previous Kirby games, you may notice that this powerful character looks a bit familiar. For his design, we wanted him to have a different effect, but the designer also wanted this character’s armor to look heroic and reminiscent of his days as a champion.

Due to this character’s special appearance, the game director, Yumi Todo, requested that he not have a clear name. Instead, we was given the name “The Aeon Hero,” which sounds more like his title. We used a similar tactic when naming King D-Mind.

The Dark version of the Aeon Hero character appears as an online-exclusive hidden boss and has a different ending from other bosses. He may appear again someday… in another world.

View the video for Aeon Hero in Super Kirby Clash below.

Super Kirby Clash originally launched for Switch as an eShop download on September 4, 2019.