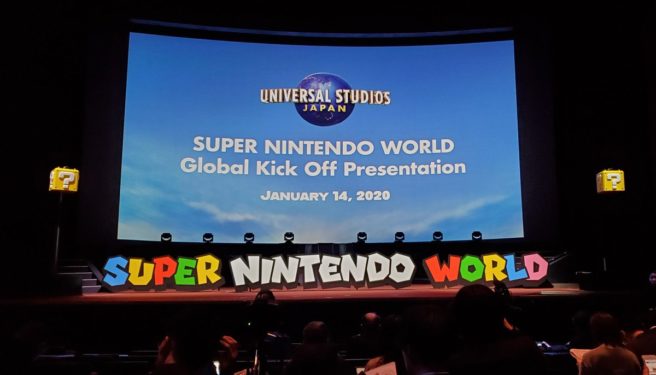 A “Super Nintendo World Global Kick Off Presentation” is currently being hosted in Japan. New information about the park has been presented, including details on the wrist bands and smartphones that visitors can use.

Here’s a roundup of what’s been shared:

– Opening before the Summer Olympics at Universal Studios Japan in Osaka
– Followed by Universal Parks in Hollywood, Orlando and Singapore
– “No limit!” is the new brand slogan
– USJ marketing director Ayumu Yamamoto says: If Disney is the dreamworld then USJ is the wake world where we will energize you and make you feel alive
– Super Nintendo World will use tech + smartphone app
– Wearable wrist bands called the “Power Up Band” will make you feel like you’re part of the game world
– You can collect digital coins and compete with others
– “A life-size, living video game” – Thierry Coup
– Interactive experience

We also have a few photos: