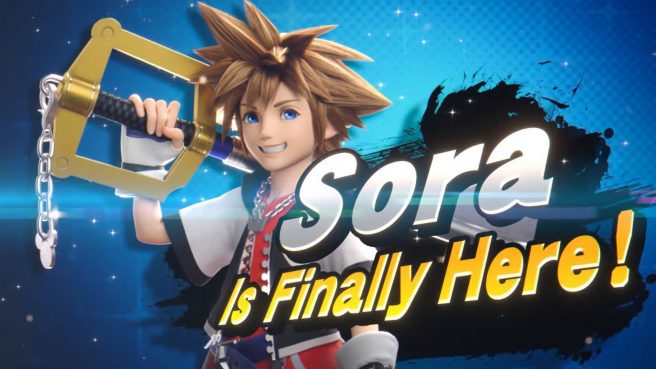 Sora from Kingdom Hearts is joining Super Smash Bros. Ultimate as a new DLC character, Nintendo has just announced. This will be the final participant in Fighters Pass Vol. 2. It will be going live on October 18.

Sora won’t just be a standalone character. Like all other DLC, a new stage, music, and spirits will be included.

– English and Japanese voices included
– Controls are relatively straightforward
– Excels at airborne fighting
– Has a high midair jump
– Pretty far recovery distance
– Quite floaty
– His weight is his biggest weakness
– Can be easily launched
– P1 variation based on his appearance in Kingdom Hearts 1
– Costumes will change in the other color variations, but his face and hair will remain the same
– Kingdom Hearts, Kingdom Hearts II, Kingdom Hearts 3D, Kingdom Hearts III costumes
– Color variations change even more from P5 onward
– P5 is Timeless River with dedicated facial expressions
– P6 is Kingdom Hearts II’s Valor Form
– P7 is Kingdom Hearts II’s Wisdom Form
– P8 is Kingdom Hearts III’s Ultimate Form
– 5 spirits included
– Attacks might be a bit slow, but the timing window for the attacks is longer
– If you repeatedly hold down the button, some of the moves will become three-hit combos
– Speed of the neutral attack is fast, but has low attack power
– Slide tilt attack is slower, but has high attack power
– Launch of an opponent will change depending on whether it’s a combo or if it stops at one hit
– Tilt up attack: length of the attack is long and will continuously hit
– Down tilt attack leaves you less vulnerable than a single neutral attack
– Side smash attack: Sora performs a powerful swing
– Up smash lets you attack with a flash from the Keyblade
– Down smash: stab downward from a short hop
– Air strikes are simple; just hit and swing
– Neutral air and forward air attacks are combos
– Back air attack is an easy swing
– Up air attack can be used against aerial attacks
– Down air has you spinning vertically and dropping down to attack
– Forward throw is standard
– Backward throw: Sora performed throws like these in the original game; has high launch power
– Up throw: if all conditions are met, you might be able to continuously attack in the air
– Down throw isn’t very powerful, but the opponent won’t go far
– Neutral special: Magic (Firaga, Thundaga, Blizzaga)
– Up taunt’s magic cycles in order just like the Magic move: Stopga, Aeroga, Curaga
– Side special: Sonic Blade
– Up special: Aerial Sweep
– Down special: Counterattack
– Final Smash: Sealing the Keyhole
– Controls similar to how Sora was in the original Kingdom Hearts
– Stage travels around Hollow Bastion, but if time’s running out or on low stock, you’ll end up in Dive to the Heart
– Various characters will also appear at Dive to the Heart
– 9 songs included
– No new arrangements
– If you have save data from Kingdom Hearts: Melody of Memory on your Switch, you’ll receive the song Dearly Beloved: Swing Version in Smash Bros. Ultimate

This officially marks the end of DLC fighters for Super Smash Bros. Ultimate. Fighters Pass Vol. 1 was made up of Joker from Persona 5, Hero from Dragon Quest XI, Banjo & Kazooie from the N64 classic, Terry Bogard from Fatal Fury, and Byleth from Fire Emblem: Three Houses. In Fighters Pass Vol. 2, the game added Min Min from ARMS, Steve & Alex from Minecraft, Sephiroth from Final Fantasy VII, Pyra / Mythra from Xenoblade Chronicles 2, and Kazuya from Tekken.