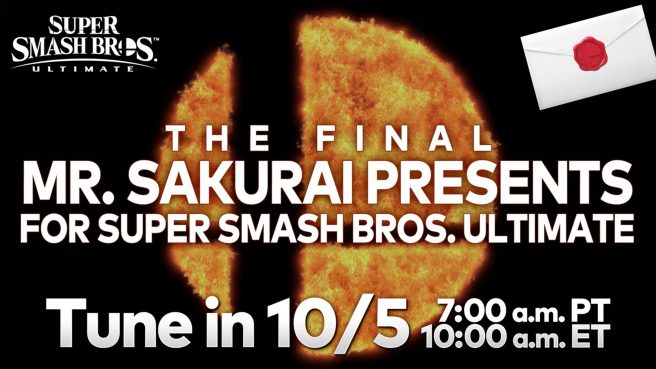 The final “Mr. Sakurai Presents” presentation for Super Smash Bros. Ultimate is almost here, and we have a live stream for the proceedings. You’ll be able to tune in starting at 7 AM PT / 10 AM ET / 3 PM in the UK / 4 PM in Europe.

Nintendo announced a couple of weeks ago that the last DLC fighter for the game would be revealed today. Director Masahiro Sakurai will now share the news and share an in-depth look at the character in his today’s broadcast. We should be getting a bit of other news as well, including the next wave of Mii Fighter costumes.

You can watch the final “Mr. Sakurai Presents” live stream for Super Smash Bros. Ultimate as it happens below.

We’ll have coverage for the Super Smash Bros. Ultimate “Mr. Sakurai Presents” live stream presentation during and after the event.