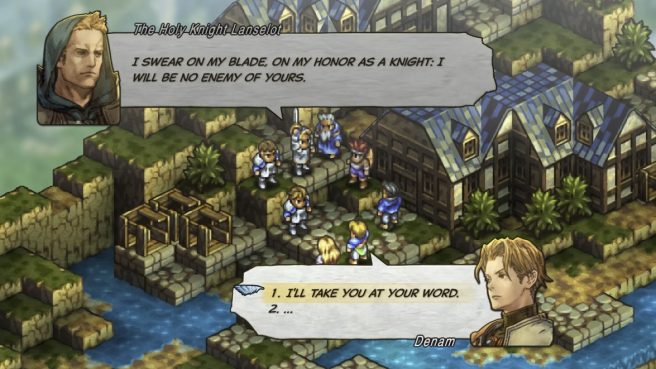 Square Enix is bringing back yet another classic game before the end of the year in Tactics Ogre: Reborn, but not all fans have been on board and there has been some criticism levied against aspects like the graphics. The original title featured pixel graphics, and while Reborn retains the style, the art has a smoother look and the text font has been updated.

Tactics Ogre: Reborn producer Hiroaki Kato was asked about how the smoother look came to be in an interview with IGN. He ultimately explained that Square Enix was “thinking about how to show it on new modern technology with high-resolution screens” and “to show the power and beauty of the original pixel art on modern technology without them looking terrible.”

Kato full words regarding the graphics in Tactics Ogre: Reborn:

Initially when we remade the pixel art, we were thinking about how to show it on new modern technology with high-resolution screens. That was the main goal: to show the power and beauty of the original pixel art on modern technology without them looking terrible. If you just took, for example, the SNES or the PSP graphics as they were and threw them up on a high-resolution modern monitor, they would just look like a mosaic. You’d be unable to make anything out.

We really did our best to make sure that the new art would – on new monitors, on new technology – be displayed nicely. We put in tons of really small pixels and really small dots to achieve that effect. The thing is we designed them for most modern monitors that people would be using. But if you’re seeing it on a small screen, or maybe a trailer, it could look a little bit strangely smooth. But I think if you played it on your home console or on a standard monitor, you would not feel any oddness to the movement. It would all seem right.

I mean, we could make it as smooth as we wanted to. We could just have spent lots of hours and made it extremely smooth and nice, but we wanted to make sure it retained the original’s feel and style. We’re constantly looking at the original and comparing it to the new version, and checking back and forth to make sure that the new art that we’re making still retains the qualities of the old.

Something else Kato said is that the team didn’t consider making the game with HD-2D, but “kind of played with the idea of making it 3D”. After thinking about the appeal of the original though, Square Enix knew that “it was really well done pixel art, so we realized that we couldn’t have a Tactics Ogre game without this really high-quality, awesome looking 2D pixel art.”