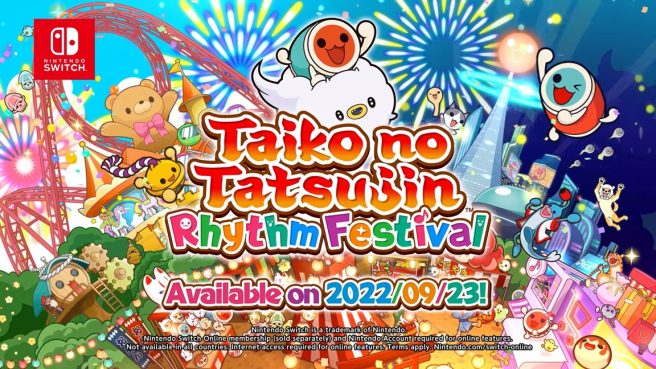 Bandai Namco has determined a final release date for Taiko no Tatsujin: Rhythm Festival. The game will be available on September 23, 2022 forSwitch.

Taiko no Tatsujin: Rhythm Festival was revealed during a Nintendo Direct back in February. Bandai Namco previously committed to a general 2022 release window.

Welcome to Omiko City! Get ready to drum to the beat of your heart with DON-Chan! Join an amazing musical festival, solo or with friends! “Taiko no Tatsujin: Rhythm Festival” is coming to Nintendo Switch on September 23, 2022! Enjoy a whole host of exciting features and popular music in this all-time favorite series!

A new character, Kumo-kyun, has been added, and the game has evolved to include online battles, a party mode, and a music subscription service!

THE STORY – Discover Omiko City, where the Taiko world is set. You will strive to become a Taiko Master along with your buddies, DON-Chan and Kumo-kyun!

TAIKO MODE – Have fun playing Japanese Taiko with your favorite songs! There are four difficulty levels to choose from: “Easy,” “Normal”, “Hard”, and “Extreme” to match your skill level. There are 76 songs in the collection, including the latest songs such as “Gurenge”, “Feel Special”, and “Racing into the Night”! You can play the game in a variety of play styles, such as “Handheld Mode,” “TV Mode,” “Sharing Joy-Con,” “Shaking,” “Touch Play,” and “Taiko Drum Set”

PARTY MODE – In “Don-chan Band,” up to four players take charge of different tones and play together to make a successful live performance. And in the “Great Drum Toy War,” you build your own deck of toys and battle it out!

CUSTOMIZE – Get “Don Coins” by playing various modes. Use the coins to get items such as costumes and name plates from the in-game store! Customize as you like!

TAIKO MUSIC PASS – Play over 500 additional songs from a variety of genres, on a music lineup with monthly updates.

Find a new trailer highlighting the release date news for Taiko no Tatsujin: Rhythm Festival below.

Fans interested in a physical version of Taiko no Tatsujin: Rhythm Festival will be happy to hear that this is in the works. It’s unclear if all retailers will be carrying the game, but Bandai Namco is already taking pre-orders through its online store here.