Tales of Vesperia: Definitive Edition devs on the remaster and series’ future 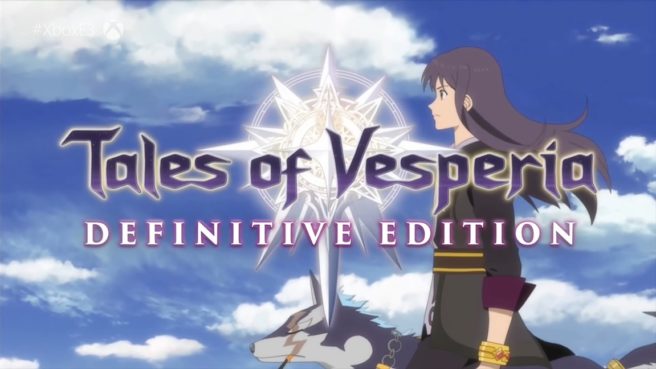 This week’s issue of Famitsu has one of the first Tales of Vesperia: Definitive Edition developer interviews. Producer Yosuke Tomizawa and Yoshito Higuchi, chief director of the original game, discussed the RPG.

The chat has some interesting discussion about how Tales of Vesperia: Definitive Edition came to be and the remaster itself. There’s also some talk about the possibility of other remasters/remakes and the next entry in the franchise.

To start things off, could you tell us about what led you to start working on the remaster, and maybe about the particulars of the game’s development?

Tomizawa: This year marks the 10-year anniversary of Tales of Vesperia’s release. Looking back on the series as a whole, we found that the number of titles that aren’t available on this generation’s hardware has risen considerably. We wanted to respond to the calls of the players who want to play those games – that was how we came to be developing the remaster. In addition to that, we wanted to appeal to more players, so we’re releasing the game on systems like the Nintendo Switch and PC at the same time as the other consoles.

Development of the remaster was first announced at this year’s E3 conference during the Xbox presentation. What was the reaction to that like?

Tomizawa: The incredible amount of cheering we got came as a shock to me! The realization that Vesperia was well-received overseas and the sheer amount of support we received… It felt like my body was literally shaking.

Higuchi: The base for the remaster was the PlayStation 3 version of the game that never saw an international release – fans abroad have been passionate about wanting it for quite a while.

Fans abroad were well aware of that version’s release, it seems. Has that been the same with other titles in the series?

Tomizawa: Not necessarily every title given the number of projects we’ve worked on, but we’ve definitely started producing more and more titles while keeping fans overseas in mind.

Are there any new elements that have been added to the game with the remaster?

Tomizawa: There aren’t any new elements within the game itself, but we plan to bundle items and costumes that were previously paid content with the game for free this time.

Higuchi: For those who only played the Xbox 360 version of the game, you could say that the additional characters from the PS3 version (Flynn and Patty), additional in-game events, and full voice acting are all new elements!

From a visuals standpoint, it seems like everything has been fully rendered in HD.

Tomizawa: While the resolution will vary depending on the system you’re playing the game on, we refined the graphics with full HD in mind. Before, only the game’s battles sported 60 frames per second – that has since been expanded to encompass the full game!

Higuchi: The 2D effects look particularly clean this time around. Aside from that, with the entire game being able to run at 60fps, things like moving around on the map feel incredibly different.

Have the cutscene movies been remastered as well?

Tomizawa: Concerning the animation, we’ve upscaled everything to support full HD. The cutscene movies, however, are basically being rendered in real-time, so they’re built to suit your resolution.

Game development has changed a lot over the past 10 years, was there anything particularly hard about moving forward with development?

Tomizawa: We still had the source data from the previous version of the game, so we started by seeing how much of it we could still use. As it turns out, the game was made more uniquely than we thought! (all laugh)

Higuchi: Vesperia is the series’ first foray into HD, so we were fumbling around a bit during development. Looking back on it though, development was quite tricky indeed. There were a lot of places where we had to engage in craftsman-like work; I remember even Production IG, the studio in charge of making the animated parts HD, saying “are we really going to be able to pull this off?” It was a transition, for sure.

It seems like the move to HD wasn’t an easy transition.

Tomizawa: We had to make use of a variety of techniques. It felt like I was only able to move forward thanks to the help of the development staff. Looking back on it all, there were a lot of times where I could definitely feel how old the game was.

Higuchi: To tell the truth, I actually didn’t really participate in the remaster’s development. I was basically only there to help if there was any trouble, so I had to steel myself for it – thankfully, everything went okay.

Do you plan to remake or remaster other titles in the series?

Tomizawa: The most important thing is that we allow as many people as possible to experience the Tales series; and as time passes, we’ll have to make sure those people have access to the games that started it all. Whether that’s through remasters, remakes, or something else entirely, I don’t know. We do, however, plan to listen to the fans’ requests.

So, are you saying that you’ll continue to be involved as a producer in the series’ future?

Tomizawa: That’s right. Including the new console game that was announced at Tales of Festival 2018, I plan to keep working hard on the series as a producer.

Will you oversee the Tales IP as a whole as you did with the God Eater series?

Tomizawa: When it comes to the series itself, there are times where we can’t put out a new console game for a while, so for now I plan to devote the whole of my attention to developing the next game for home consoles. Sometime down the road I’d also like to see what we can come up with by having the console development team collaborate with the mobile team and the event team.

Speaking of mobile games, Tales of Crestoria was just announced? What kind of game is that going to be?

Tomizawa: I’m not directly involved with the project, but I can say that the game has an all-star lineup working on it and that fans will be able to enjoy a brand-new story. The game is intended to be an entry point to the series for people who like playing smartphone RPGs.

And what about the completely new title that you’re developing?

Tomizawa: I’m not really in a position where I can say anything yet, so stay tuned for further information! That being said, just under the surface the development team and I have been talking for a while about the “value of the brand” and “what fans find interesting.” All of us are working on the title with strong hopes for it.

Incidentally, who’s handling the development for it?

Tomizawa: That would be Bandai Namco. They practically built the series from the ground up, so I have a lot of faith in them.

Higuchi: At the moment I’m in charge of another title, but every day I see Tomizawa-san around the Bandai Namco office talking with the staff. We’re communicating closely with each other despite working on separate projects! Personally, I have high expectations for his game.

Tomizawa: I’m constantly thinking about how I can communicate with the fans and incorporate their requests in the future, but for now, I’d be happy if everybody enjoyed Tales of Vesperia: Definitive Edition!