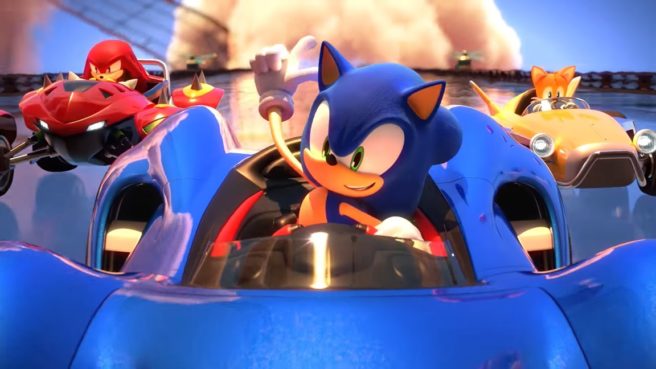 Sumo Digital worked on two kart racers for SEGA. The two sides teamed up again for Team Sonic Racing, but there are no SEGA characters to be found here – it’s naturally all about Sonic.

Some may be surprised to see such a specific roster focus given Sumo’s past efforts. In a recent interview with GameSpot, studio design director Derek Littlewood explained that the move was a difficult one, but it allowed the team “to create a very new kind of unique experience”.

“The reason we [dropped non-Sonic universe characters] was so we could dive into the Sonic universe in more depth, and tell a canon Sonic universe story, with our team adventure mode. That was very important for us.”

“It was a difficult decision for us, but we feel like that was the right direction to go in. Because it’s allowed us to create a very new kind of unique experience for Team Sonic Racing that I think people won’t have had with the previous titles.”

Designer Ben Wilson also chimed in with the following:

“Because this game’s set in a universe with characters who have relationships already, it’s let us do a dialog system where they’re on track and they’re yelling at each other, and they have familiarity with each other and make references to history, which we wouldn’t have been able to have done really [had other franchises’ characters been present]. Or at least, not in as smooth a way. So it’s let us do some additional stuff as well.”

Littlewood did say that quite a few staffers at Sumo are “old-school SEGA fans [who] are really keen to continue doing the All-Stars aspect of the game.” While nothing “is currently on the cards,” Littlewood said “it’s something that we would love to be able to go back to.”