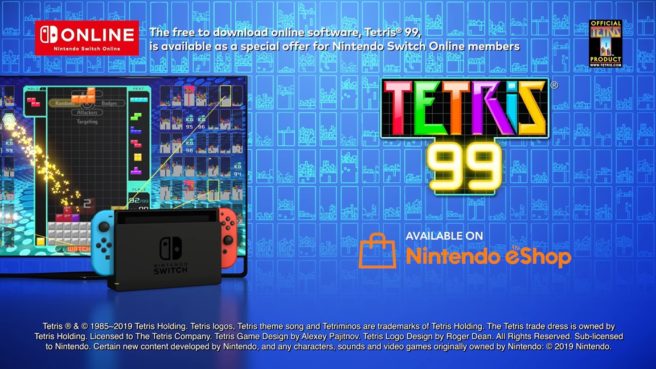 Alexey Pajitnov created one of the most important and influential games of all times in Tetris. The classic title has been released on plenty of different platforms over the past few decades in different forms and is a big reason why the Game Boy was as successful as it was.

Tetris 99 was Nintendo’s take on the battle royal genre, and might be the most interesting version of Tetris yet. What does Pajitnov think of the Switch release? He’s actually appreciative of what was done with Tetris 99, telling USgamer that it “is absolutely a great title.”

He mentioned to the site:

“Tetris 99 is absolutely a great title. Basically, I think the one-player version of Tetris has been more or less stabilized over the years. That’s good, and we’re just adjusting the game to new user interfaces. But for two-player modes and serious competition, there are several challenges to overcome. I really want Tetris to establish itself as an esport. We’re getting there very slowly but surely.”

Pajitnov’s Switch praise doesn’t stop there. He loves the system, and said that Nintendo “did a great job on it.” Zelda: Breath of the Wild is his favorite Switch game and the only downside is that his son keeps stealing his console from him.

More: Alexey Pajitnov, interview, Tetris 99, The Legend of Zelda: Breath of the Wild