The Escapists 2 launches January 11 on Switch 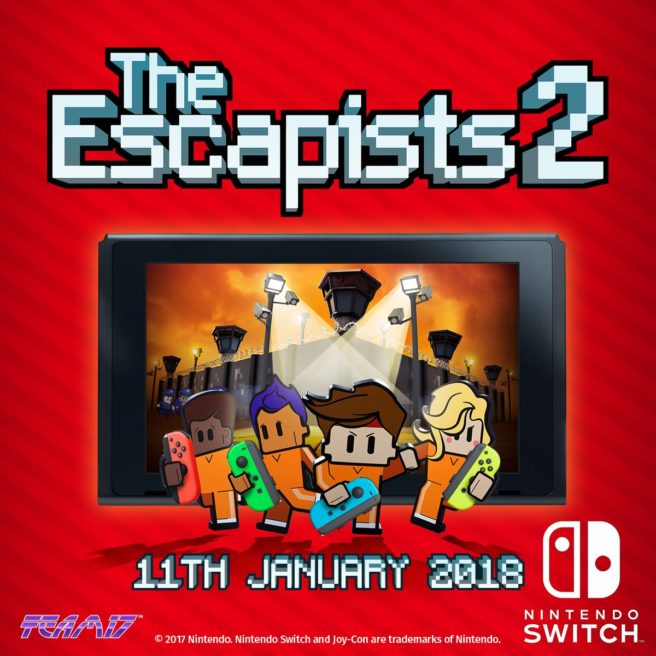 The Escapists 2 will let you play with a friend via a local two player split screen mode, where you can use either a Joy-Con or Pro Controller to escape from jail with a friend.

We have more information and a Switch trailer for The Escapists 2 below.

The Escapists 2 allows you to bust out of anywhere, with anyone. Team up with another inmate for local two player split screen mode, taking either a Joy-Con or Pro Controller each to team up to break out, or work against one another to determine who’s the quickest convict to make an escape!

Risk it all to breakout from the toughest prisons in the world. Explore the biggest prisons yet, with multiple floors, roofs, vents and underground tunnels. You’ll have to live by the prison rules, attending roll call, doing prison jobs and following strict routines; all the while secretly engineering your bid for freedom! Your prison escape antics will take you from the frosty Fort Tundra, a train hurtling through the desert, and even to the final frontier!

The Escapists 2 features:
– 10 unique themed prisons to escape from
– Two player split-screen play, and up to four player co-op and versus online multiplayer
– Drop-in, drop-out online multiplayer experience. Carefully plan and execute an intricate escape from your initial incarceration with your fellow inmates either online or locally, or simply hop into an existing game that’s in progress to help pull off the final touches of the escape!
– Create your con with over 300 customisations to create your perfect prisoner
– A dedicated tutorial for new players to learn the basics of prison life