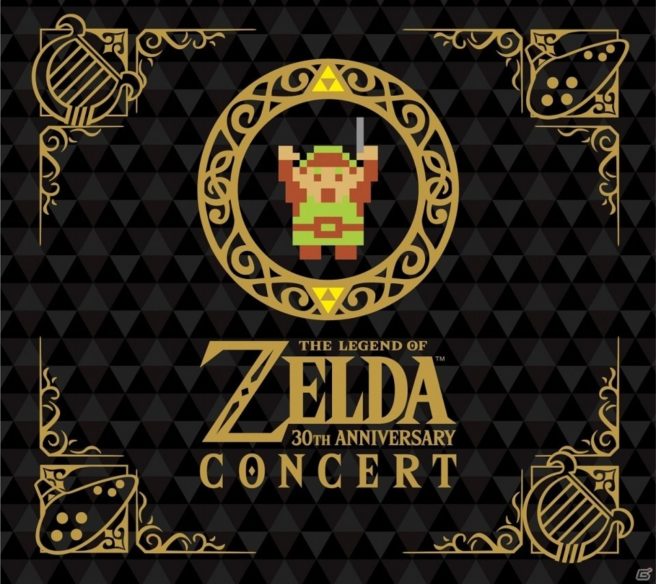 The Legend of Zelda 30th Anniversary Concert album is heading to Japan on February 15. It’ll be published as both a limited edition item as well as a standard release, both of which can be pre-ordered and imported from Play-Asia here and respectively.

In the latest issue of Nintendo Dream, the set list for the album is revealed. Pretty much all of the songs from the actual concert are included as expected, though with a couple of exceptions. The Zelda: Breath of the Wild main theme and Kakariko Village are apparently absent (from the “Encore” part of the concert).

From A Link to the Past. The song plays when the player sneaks into the castle to rescue Princess Zelda. It can also be heard in other titles when battling inside Hyrule Castle.

From Ocarina of Time. A song that symbolizes Princess Zelda. The gentle and beautiful melodies from the ocarina and harp color numerous famous scenes throughout the series.

From Wind Waker. From setting off to an adventure in the ocean to fighting against the nemesis until the ending, this is a medley that is reminsicint of a variety of songs.

From Ocarina of Time and Majora’s Mask, this is a medley of songs played by Link with the ocarina, which is delivered by the tone of various instruments.

A medley that collects battle songs that color the battles against strong and large bosses in historic titles. Amid the melodies that bring the sense of tension, there are musical notes that stand out as they change between each title.

6. A Link Between Worlds and Tri Force Heroes Medley

A medley of songs from the two titles released on 3DS. Consists of famous songs with unique back chorus that will leave a lasting impression in ears, and the main theme that transitions from a light atmosphere to a grand one.

From Skyward Sword. A touching last melody that invokes memories of the places visited during the adventure.

A special medley to commemorate 30th anniversary that consists of songs from a vast range of old and new titles, such as the Temple in Link’s Adventure and the Train Field in Spirit Tracks.

A medley of 13 selected BGMs consisting of fanfare, mini-games and dungeons.

From Ocarina of Time. The theme of the Gerudo tribe of the desert that has a uniqueness in its light flamenco tune.

11. Hyrule Field from Ocarina of Time

A song with seamless tune transition, from a calm atmosphere when standing to high-tension during battles, with the transition based on instruction from the audience on concert day.

A theme song that symbolizes the Great Fairy who gives power to the hero on his adventure. The melody of the harp that babbles like water and the elegant voices of the women chorus give peacefulness.

From Twilight Princess. Amid the beauty of Hyrule, there is a suspicious and austere shadow lurking. The (world/story) development of the game is expressed in a medley.

14. The Legend of Zelda Main Theme

From The Legend of Zelda and A Link to the Past. Three famous songs that define Zelda are collected at the end of the concert.

One interesting note about the DVD included with the limited edition by the way. It will show gameplay which was displayed on the screen at the concert. In other words, there might not be footage of the concert itself.